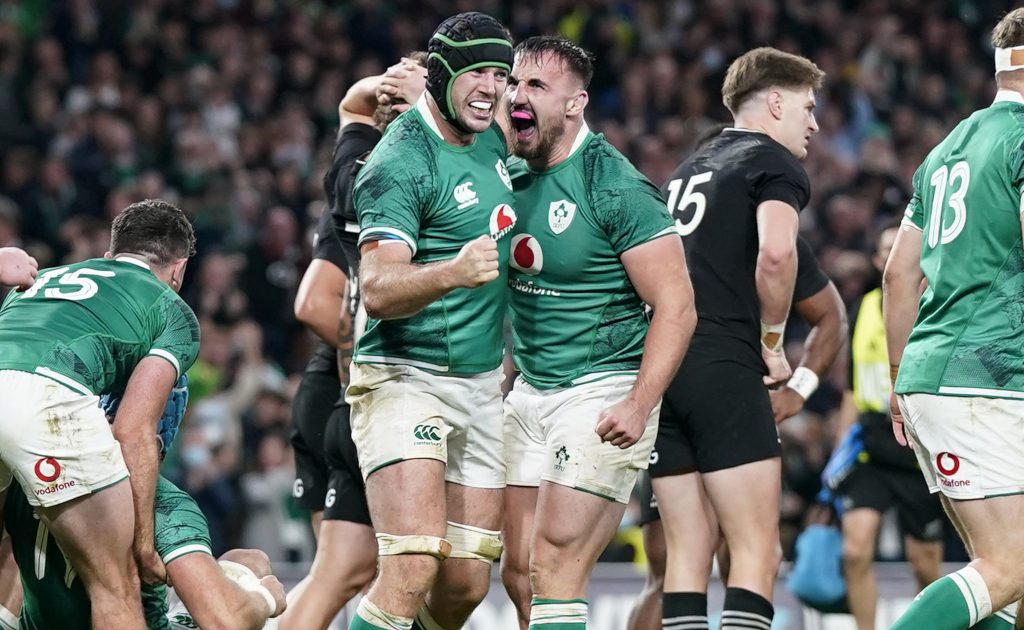 Ireland produced an heroic performance to record an historic 29-20 victory over New Zealand, only their third over the All Blacks in 33 meetings. In extending their winning run to seven matches, Andy Farrell’s men showed the offloading IRE v NZ Rugby game that burnished last weekend’s victory over Japan stands scrutiny against the world’s best.

Two Joey Carbery penalties in the final seven minutes took a breathless match away from the visitors, who thus experienced defeat in Europe for only the third time in 41 Tests in Europe. 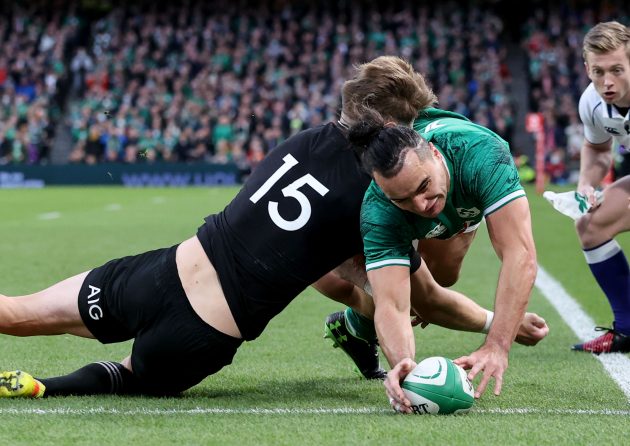 Back-row Caelan Doris was named Man of the Match but there were outstanding performances all over the park, from bandaged warrior Garry Ringrose to thunderous New Zealand-born wing James Lowe. The forwards to a man didn’t yield an inch.

The jutted jaw of Johnny Sexton as the anthems concluded showed Ireland meant business and they were out of the blocks quickly, with some terrific continuity built on the speed of their ruck ball.

Codie Taylor was yellow-carded on 12 minutes after a high tackle on Sexton and two minutes later Ireland drew first blood. The forwards did the close-range graft on the right and the ball was switched wide where Hugo Keenan’s long pass put Lowe – one of three native Kiwis in the Ireland side – in at the left-hand corner.

Lowe, winning his eighth cap, had his best game for his adopted country, frequently popping up in midfield with his offloading and evasive footwork.

Both fly-halves were in the wars, Beauden Barrett going off for an HIA that he failed and Sexton needing treatment after falling awkwardly after a tackle by Rieko Ioane.

The home side were dealt a bitter blow on the half-hour. First, a try by Tadhg Furlong was chalked off because of a double movement by Ronan Kelleher in the preceding carry.

Then Taylor, restored to the fray, was put in by Dalton Papalii from a lineout move that exploited an excessive gap between Furlong and Kelleher.

The Irish surged forward, testing the All Blacks vs Ireland to the limit, but the black wall held firm and the visitors took a 10-5 lead into the interval – Jordie Barrett having knocked over a penalty and converted Taylor’s try – that went very much against the run of play.

That was emphasised by the fact Ireland had 70% possession and seven visits into opposition 22 in the first period yet accrued only five points. “Ireland have thrown the kitchen sink at New Zealand but they need to be more clinical,” said Channel 4 pundit Tommy Bowe.

Bowe’s wish was granted within two minutes of the restart as Kelleher crashed over to cap a series of forceful Irish drives. Sexton’s conversion attempt struck the post but Ireland were at least on level terms with the momentum behind them.

Ireland were harrying the All Blacks Ireland rugby to distraction, forcing a succession of mistakes seldom seen among the world’s best team. The stadium erupted on 50 minutes when back-row Doris ran a clever unders line and fended off Taylor to dash under the posts from 20 metres.

Sexton converted and added a penalty after David Havili’s slap-down for a 20-10 Irish lead.