WILL GENIA: How Wallabies should react to Quade shocker, potential ‘superstar’ and ‘incredible’ backrower excel 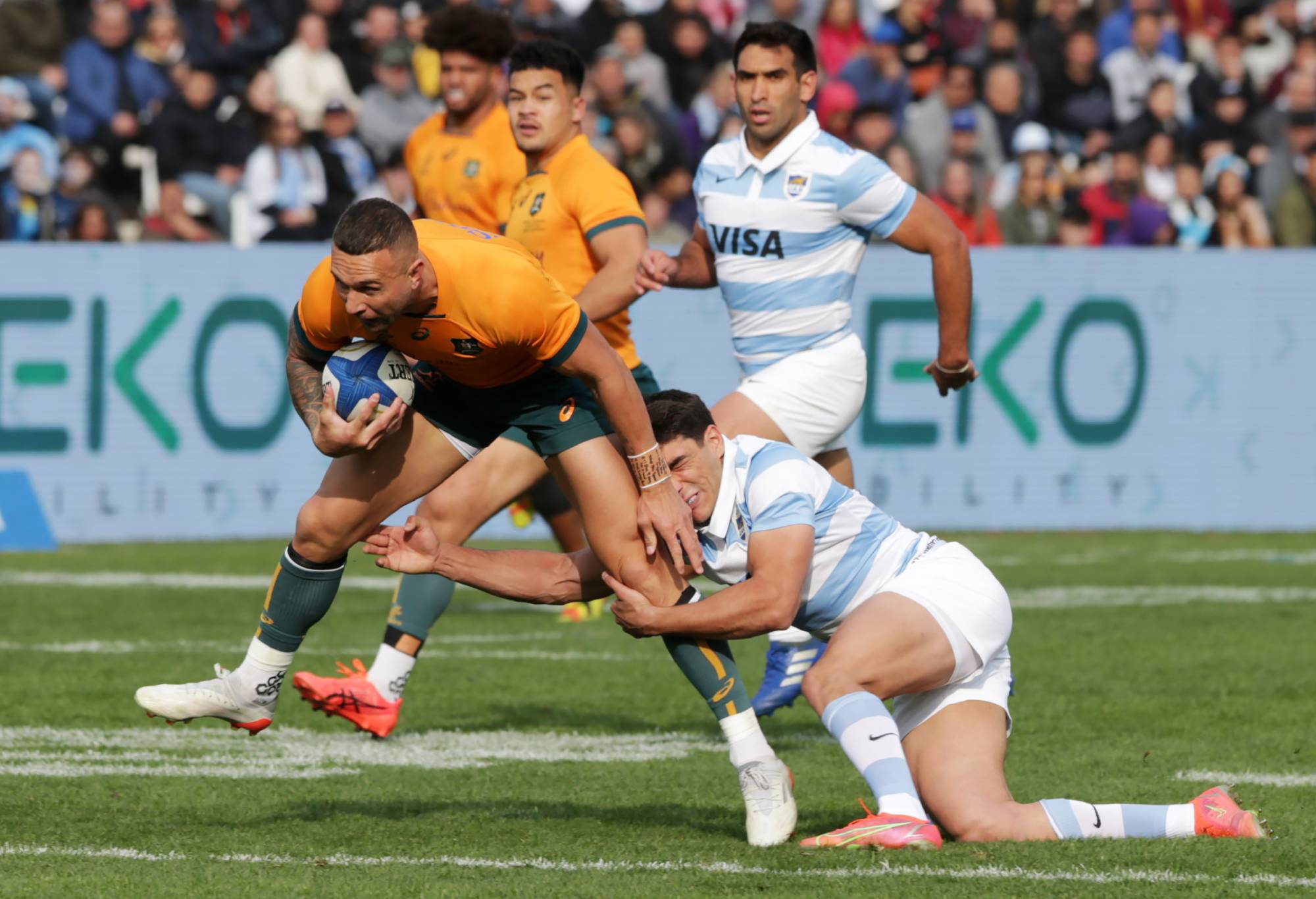 Plenty has happened in the few days since I suggested the Wallabies could win the Rugby Championship. Michael Hooper has come home, Quade Cooper could be out for the most part of a year, and despite all that Australia beat Argentina to get off to a winning start.

I’ll be honest. It’s going to be a bit more of a struggle now.

Quade brought so much direction in terms of the tactical nous and control of the game. You see that in the faith the coaching staff and players have in him.

We also don’t know when Hoops will be back and his leadership and his presence on the field is something that you can’t measure.

His talent as a player is immense but he also can galvanize a group. You just feel better when he’s on the field.

Add in the loss of Samu Kerevi and I think it’ll make things a little bit more difficult, especially because if you look at the Springboks, they were incredibly dominant against the All Blacks. They will be a tough challenge for us even though we play them here.

The group should still have every bit of belief they can win the competition but looking from the outside in now, because of those crucial injuries and withdrawals, I think success looks more like finding combinations that work for bigger challenges ahead as opposed to the outcomes from this series.

On a personal level, I’m gutted for Quade. He’s a friend and we’ve played together for almost 20 years.

I know hard he works to stay in good condition all year round. You saw Dave Rennie’s comments in the lead-up about how much of a difference Quade makes to that group in terms of his skill set and his leadership. And you saw that in the time that he played on Sunday – his ability to organise those around him and give that calming influence. It was also, after the disappointment of missing the England series, a great opportunity to build on what he did last year.

While this is shocking for Quade it could be the making of Noah Lolesio.

Rennie has an interesting call to make around the 23 for the second match this weekend.


NZ rugby has enough talent to turn this around

You know what you’re going to get from Reece – he’s going to do his job well.

But if Quade is out for 12 months, I think they should be thinking about who they see fulfilling that role long term.

I’m not privy to training and the conversations that go on, but I would pick and stick with Noah. He had a really good Super Rugby season where he took the Brumbies to the semi-final. He makes sense in the short term as well as the long term.

They might see Hodgey as a long-term fix. If so, then go for him and put Noah on the bench.

Same with James O’Connor, although James is probably struggling in terms of his performances being up and down and, from all reports, he’s struggling with his body, and it’s breaking down a little bit. When I think about all those things put together, I like the idea of Noah getting picked and them making it clear what the expectations of him are.

Quade Cooper of Australia is tackled by Santiago Carreras of Argentina during The Rugby Championship between Argentina Pumas and Australian Wallabies at Estadio Malvinas Argentinas on August 06, 2022 in Mendoza, Argentina. (Photo by Daniel Jayo/Getty Images)

If they do that you get certainty within the unfortunate circumstances and that can help take Noah to another level.

He was getting picked ahead of Quade last year but he would have always known Quade was there or thereabouts.

Last year Quade was training the house down. Noah would have been feeling the pressure in training and that was transferring into the games. I don’t think he performed as well as he would have liked to last year.

I wouldn’t see going all in on him as a gamble because he’s two or three years into playing Test footy now. Now it’s a case of ‘Noah you’re our 10. We expect you to perform. This is what we see as the responsibilities within the team.’

It would give Noah a lot of confidence knowing that he has the backing to be able to build into the game.

He has to perform, that’s a given. I thought he was okay during the English series. At moments he played well in the first Test but there were things he could have done better in the remainder of it.

With Quade injured, if Noah steps into the No.10 he could look around and it’s essentially just him. It might be him, James or Reece but I would like to see him given the opportunity.

Stability in that position is important.

Around the 2019 World Cup, we chopped and changed our halves a lot. Whitey started against South Africa and I did against Argentina and in the World Cup he started two games and I did two and the quarterfinal.

You want continuity of combination and selection. You get comfortable with particular voices, different styles of play, leadership, and direction, and if that’s constantly chopping and changing it affects the guys around you and that dynamic within the 23.

It was so good to see Jordie Petaia get through 80 minutes in Sunday’s Test. A couple of times he was in space and I thought he’d open up and he hesitated just a bit. He’s starting to find confidence in his body but that was a positive step in the right direction.

If he gets through some more 80s, gets fit and conditioned and he’s in good shape, he’s going to be a superstar.

I genuinely believe that because of the skills, attributes, and abilities that he brings to the game. He’s excellent under the high balls. He’s strong. A competitor. He’s got great hands. He’s got great vision and good skills. He just needs time in the saddle to build confidence in his game to be able to execute at Test level.

At the 2019 RWC he played 13 for us in that quarterfinal and he was unbelievable. It’s all there – it’s just a case of building confidence in his body and then from that confidence in his game and understanding what his game looks like at Test level.

I think for the moment wing is the right position for him. But the more confidence he gets in his body and his game, I’d love to see him at 13.

The 80 minutes on the weekend was a good start. The number of injuries he’s had and the time he’s missed it’s probably affected his confidence in his body.

He’s a good kid, trains hard, and works hard. I’d love to be able to see him find some rhythm and consistency in games and then show everyone what a world-class talent he is.

I was impressed with our forward pack on Sunday although the game was pretty scrappy overall.

There were patches of good play but then there would be a little error or just disruption from the Argentina pressure or we would turn the ball over at the breakdown.

What kept us in the game was our ability at set piece. That was evident with the driving maul try and penalty try. But the ability to have parity and a good platform to attack off the back of set piece is what kept us going.

We nailed our line outs and scrums. Being able to attack off set piece allowed us to stay in the game.

Bobby Valetini was incredible. With Samu Kerevi being out we lose a little bit of punch in midfield. It puts pressure on guys around that space to be able to deliver that and Bobby seems to have shouldered more responsibility in that space.

Fraser McReight must be the most like-for-like replacement player ever. He’s built like Hoops, has a similar game style – all energy and buzz – and is and always there in support or chasing back in defence.

He put pressure on at the breakdown, was always there in and support tackled very well and he was rewarded for his good core skills working around the set piece with a maul try.