WILL GENIA: ‘F—ing deal with it!’ Dog tags and F-bombs – How Cheik connects, and what went down in Salta explosion 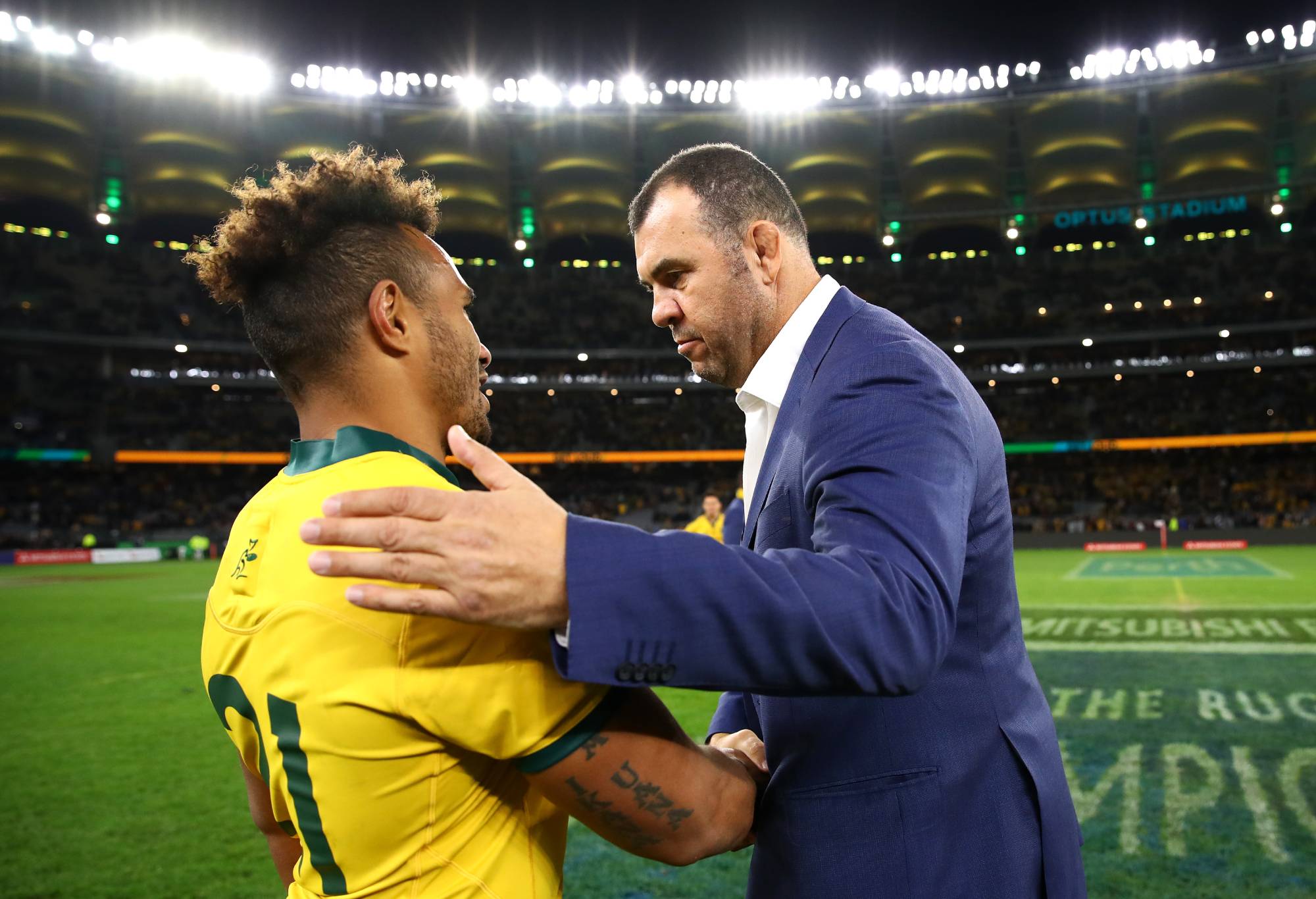 When the players walked into the dressing room down 31-7 at halftime to Argentina in Salta, four years ago, the feeling wasn’t one of despair, or that all was lost.

We had been beaten by them a couple of weeks earlier on home soil and were well behind on the scoreboard, but I felt we had done some good things in the first half, creating opportunities without being able to capitalise on them. And Argentina had played out of their skins.

We got into the room and Michael Cheika stormed in, dropping all the F-bombs.

Most of you will have seen the footage, without the audio, of Cheik going nuts during that halftime. He reaches out to Bernard Foley – it wasn’t personal, ‘Nard’ was just unlucky enough to be the closest player to him – stabbing at the badge on his jersey and yelling at us: “You’re playing for f—ing Australia, how about you blokes pull your f—ing fingers out and show it!?’

Then a pause. Then he said “You know what? You’ve got to f—ing deal with it.” And he walked out.

For Cheik it was always about getting us in a better emotional state and that was one of those times where we needed a rocket. Everyone was pumped. We scored from the kick off and kept scoring, winning 45-34.

That was a big one. Probably the biggest. You can’t do it all the time. If you do the message will get lost, because everyone’s like, ‘mate, stop yelling and screaming.’

That was a different one. That was one where everyone thought ‘wow’. It was exactly what we wanted to hear, and what we needed to hear. And he knew it.

Wallabies coach Michael Cheika congratulates Will Genia after winning the 2019 Rugby Championship Test against the All Blacks. (Photo by Cameron Spencer/Getty Images)

He was the best coach I had. It’s a common misconception that he’s just his angry, grumpy person. But he has a genuine intent to have connection, and relationships where it is about the people as much as it is about the player.

We could be honest with each other about rugby and about things off the field. He was there for me, sometimes as a friend as much as a coach, and there was a mutual respect there for what I’ve done in the game and what he had done.

I always felt that I had to repay him by just making sure I worked as hard as I could to be as good as I could to perform for him, as much as my teammates.

In the build-up to the Rugby World Cup in 2015 he gave the team dog tags. They had your name and Wallabies number. He was effective at using symbols like that to connect you in a way that went beyond words.

If you didn’t have that dog tag you weren’t part of this group. If you did then you were in a band of brothers, working together to do something special together, relying on each other.

We weren’t going off to war, of course, but he was tapping into the sense of brotherhood, mateship, all of that, and finding a way to resonate with the group.

That connection helped us get through the tough times. Leading into that 2015 World Cup was some of the hardest training I’ve ever done, and others who were there will say the same.

We went to Chicago for two weeks and we got absolutely flogged in the heat and humidity. Three sessions a day, sometimes four. 15 vs. 15 games for big chunks of time. But the dog tags, coupled with all the hard work that you put in, bonded us together.

I wore those dog tags during the World Cup, as a necklace in and around the group, and I think the majority of players did.

And while he worked on us being present and together – on match days you could listen to music on headphones until the team meeting, then they were off for good – he was also good at embracing who we were as individuals within that group.

You came together as a Wallaby team to represent Australia, but within that it was about embracing who you are as an individual, where you come from, and integrating yourself within the culture and the system.

When you feel like you can be yourself within that big environment it gives you more buy-in.

Having had different coaches in the Wallabies setup prior to him, that was his real point of difference – he was proactive in creating an identity.

He made sure that each individual felt comfortable being who they were and where they came from, so that they could express themselves on and off the field.

I remember we had a Samoan cookout at Scotty Sio’s place, where all the team went over for a big feed. And we went to Cheik’s mum’s place for a big Lebanese feed. They were special experiences – getting together to bond and embrace someone else’s culture within the group.

Our leaders would take the new guys away and talk them through what it meant to be a part of this team, to represent Australia, and the attributes that we wanted them to embody as they carried themselves in the group. At the time that was quite innovative; we’d never had that identity piece.

That developed those deep connections. It gets overlooked with him, but he is a very good motivator – he can tap into people’s emotions and get the best from them.

We were urged to focus on our ‘why’ and share our motivations. Within team rooms or change rooms before games, things were plastered on the wall to remind us of why we were there and to give us that extra kick of motivation, to make it apparent what it meant when we pulled on the jersey.

Former Argentina centre Marcelo Bosch is the special guest with Roar experts Brett McKay and Harry Jones as they preview the Wallabies’ TRC campaign. Listen here or find us on your podcast app of choice

A lot of the aggro stuff, that’s just the passion that comes out and it might come out regardless of if we were winning or losing.

But his motivation started early and he might theme the week in a particular way.

One week might be more tactical and we’d focus on that side of the game, rather than the physical, or maybe we were just going for full on aggression. The motivation was delivered in different ways.

A lot of it, I’m not going to lie, was about that raw emotion, where it was about being aggressive, and yes, yelling and screaming.

But the noise never drowned out the message – that was always accurate and what we actually needed.

I’m not sure if he changed in the years I spent in his team, but as with all coaches there is an expiry date. Some players can’t listen to the same voice for too long.

I never had that problem with Cheik. It never got old on me or wore on me. But a team needs a different voice and a different way of doing things after a long time.

By the end at the 2019 World Cup there was a younger generation coming through, guys like Taniela Tupou and Samu Kerevi and that generation may have needed a different voice and a change in scenery within that culture.

He’s a great fit for Argentina and will do an amazing job there. He will the emotion and passion that fits in with their personality. And from a rugby perspective he will get them fitter and make sure they are able to play and stay in games for longer periods.

In the series win over Scotland they held the ball for longer periods and they were playing more rugby than they usually do.

He will want to beat the Wallabies, but I don’t think that comes from a place of revenge.

He just loves coaching, loves footy. And the bloke just wants to win at everything.

All Blacks selection: Are these the 23 players who will save Ian Foster’s bacon?
Everything Dave Rennie said about bench balance ‘risk’, Quade’s return, Cheika’s impact, and the Samu Kerevi disaster
Go to mobile version