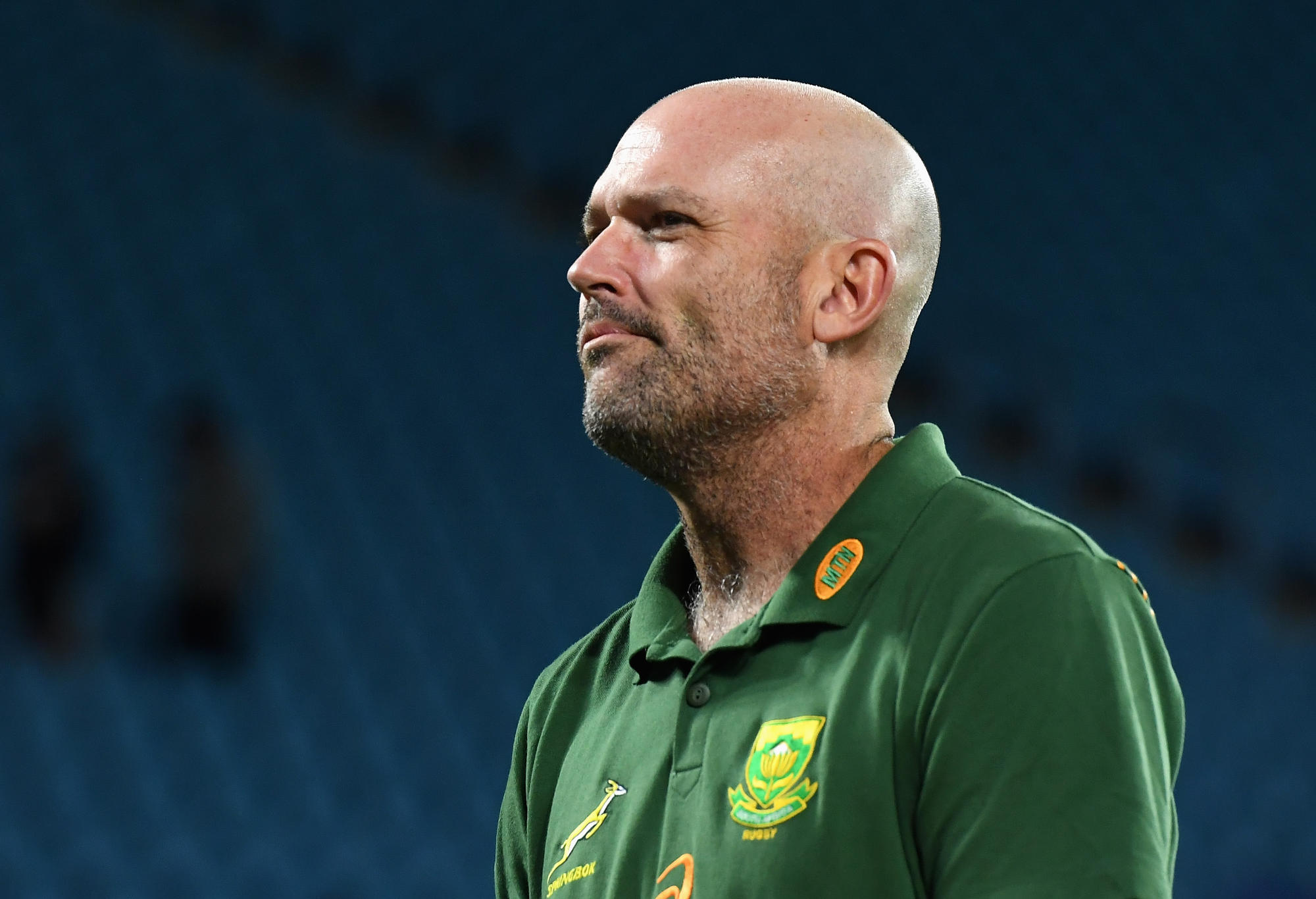 South Africa’s coach Jacques Nienaber expects to confront Wallabies’ comeback playmaker Bernard Foley during the two-Test Rugby Championship series and has called on his Springboks team to make their fans proud by addressing a terrible record Down Under.

Nienaber took the unusual step of naming his 23 for the game on Monday night, giving Dave Rennie a head start of 65 hours of planning time before he names the Australian team on Thursday.

While Foley is considered unlikely to start by Wallaby watchers, Nienaber wouldn’t be surprised to see Rennie reprise his trick from 12 months ago when he brought in Quade Cooper from the shadows to play the decisive role as Australia won both their matches against the Boks.

Cooper had spent more time with the Wallabies camp leading into that than Foley has, travelling with them to New Zealand and Perth for games against the All Blacks.

Nienaber said: “Quade is an excellent rugby player, a special player. I’m not exactly sure who they’ll start at 10 but  I think Bernard is back in the mix. Obviously a lot of experience there.

“Yes, he’s been out of the mix for quite some time like Quade last year. but I’m sure he’ll slot straight back in. He’s experienced and he can mix it up. We  probably expect him to start but we’ll wait and see.”

Rennie has called for a response from his players in the wake of their embarrassing defeat in San Juan against Argentina.

“I expect to see resolve,” he told the Sydney Morning Herald. “There’s been a fair bit of poking in the chest, a little bit last night and today. I expect to see a response.”

Australia have been shocking starters so far this year and Rennie knows that needs to be addressed.

“We haven’t started well enough, that’s an issue for us and we’re look at what we’re doing there.

“We’ve got an outstanding staff and, if you ask the players, they’ll say they’re being well catered for. But you can’t abdicate responsibility when you get a result like that.”

If Nienaber is taking comfort from the Wallabies’ dreadful performance in San Juan – where their back three was brutally exposed by Michael Cheika’s contestable kicking game plan – he is doing well to hide it, reflecting on a 32-19 defeat in Mendoza in 2018.

“We know hard it is to get a victory there,” Nienaber said. “We can relate to what happened with Australia. We got a proper hiding in 2018 against Argentina. It’s a tough place to go and when they’re passionate group and  they can make it tough. We know exactly how Australia feel because we’ve been there before.”

South Africa has also struggled with playing in Australia – having won just 12 of 41 matches, with two draws and 27 defeats on Australian soil. Since 2000 there have been 24 Tests between the nations in Australia with the hosts winning 19 with three defeats and two drawn games. Nienaber, though, rejected the idea that it was because they put more focus into playing New Zealand.

“You want to produce a performance that your country would be proud of. So it’s not that we have an eye on New Zealand and and then we we take a lesser stance against Australia. I just think Australia in Australia is tough,” Nienaber said.

“We’ve been together since 2018, and we’ve played them three times in Australia and we lost all three, so we are actually 0% [success rate] for our group.

“It shows the passion that Australia has when they play in front of their home crowd. For us it’s a massive challenge and it is a tough place for us to come and win.”

Nienaber, meanwhile, played down the difference in approach with Rennie around team announcements.

The Wallabies coach is known to despise leaked team news, with reporters admonished if they manage to source information that Rennie wants kept in house. The Australians name their team on a Thursday afternoon for home Tests – the latest allowable time frame.

Nienaber acknowledged that once players found out their selections it was only a matter of time before the news leaked to the media, and he had no concerns about letting Australia know his team almost three clear days before Rennie’s selections are announced.

“I feel we’ve got a pretty good idea of who’s going to play against us on Saturday from Australia,” Nienaber said. “You probably wonder about one or two positions, maybe.

“Coaches normally have a good idea of who’s going to play against us. So I’m not sure if that’s benefiting them or not. Our players know. It’s better for us to announce it. Get it out of the way the players can see it and we can start planning.

Nienaber made two changes from the team beaten by the All Blacks at Ellis Park but has not restored Malcolm Marx to the run on side despite calls to do so from former players and pundits.

The teams meet on Saturday with the Pumas fresh off their 48-17 thrashing of Australia and the New Zealanders buoyant after winning in South Africa, a result which saved Foster’s job.

Foster told reporters on Tuesday: “We’ve noticed quite a significant change from last year, and they’ve got a group with a lot of experience.

“Any team that can beat Australia by 30 is doing pretty good. They want to play, they play a good style of rugby, play fast, and they’ve always got a few little tricks up their sleeves.

“It’s a great game for us to come back to. It’s great to be home, but the flipside of it is their performance, particularly in the last week means there’s no room for complacency at all.”

Foster said the trials and tribuloations that surrounded the team leading up to the second match in South Africa, and the nature of their win, had forged a tight unit.

“I think we learnt a lot about ourselves and we want to own our part of everything, and we know we want to get better so we saw that, and a great desire to do that. We just have to make sure we continue against what is a very strong Argentinian team,” he said.

“We’ve got plenty of motivation to make sure we don’t rest on those laurels. We know that one win doesn’t mean a lot.

“We know we’ve got to keep growing through this year. We’ve got a Championship we want to win and we’re pretty focused on that.”

The All Blacks have lost Jack Goodhue to knee surgery. Lock Brodie Retallick has resumed contact training after recovering from his broken cheekbone and is likely to return through club rugby this weekend.

A 60-second scrum clock and a player draft have been discussed in a metting between Australia and New Zealand on the future of Super Rugby.

The Herald reported Tuesday that the competition could also look at easing rules for yellow cards for deliberate knockdowns and make less use of the TMO in ways to make the game more appealing to a wider audience.

New Zealand broadcaster Sky Sport is reportedly supportive of a player draft which could be turned into a televised product. The concept could see New Zealanders and Australians play for teams across the ditch without affecting national eligibility.

Evans also worked at Melbourne Storm and Harlequins FC – where he coached – and was Director of Rugby at Saracens FC. He replaces interim CEO Brian Thorburn, who has been caretaking the role since the Drua’s inception and grant of license in 2021.

AFL News: Clarkson to splash cash on North recruits, Blues can regroup from collapse, Riewoldt backs Kingsley
Super Rugby transfer centre: Latest done deals and how the 2023 squads are shaping up for every SRP team
Go to mobile version