RLWC Group C action in the Rugby League World Cup continues with the match between New Zealand vs Jamaica from the Halliwell Jones Stadium in Warrington.

For the New Zealand side, my focus is on Jeremy Marshall-King. Expected to play in the dummy half position more frequently against the Reggae Boys, it will be a good opportunity to see how far JMK has come this season. If he can control the middle of the ruck, it will go a long way to assuring a strong boost to their for and against totals. 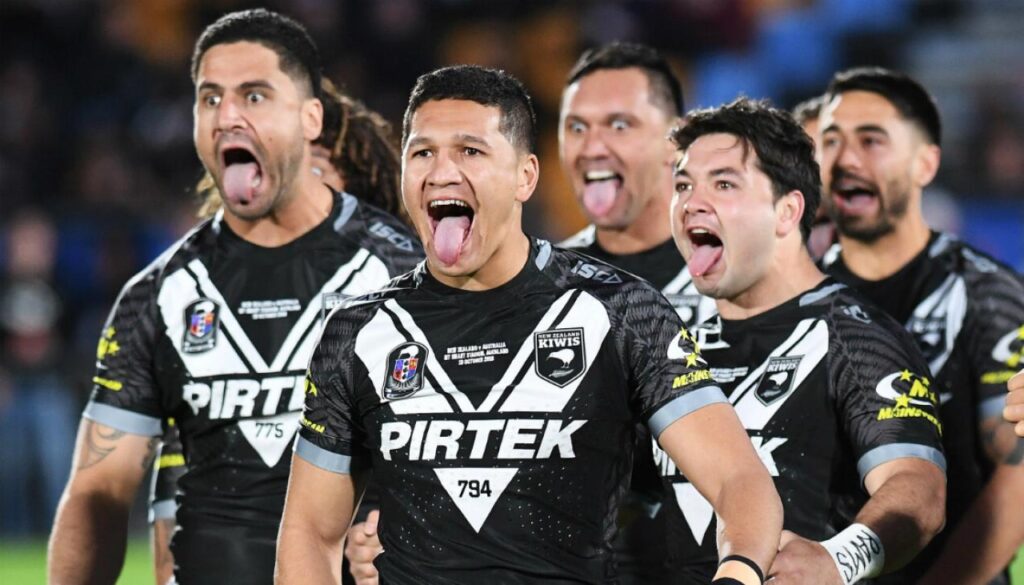 For the Jamaican side, the focus is on Ben Jones-Bishop. After lighting up the Super League a decade ago. Jones-Bishop has an important role in reinvigorating the sport of rugby league for the Jamaican people. A tournament like this and their continued improvement can really boost the participation numbers of the sport. Jones-Bishop had some good carries out of his own end to try and put the Reggae Boys on the front foot, look for that to continue against their much fancied opposition.

Who is in New Zealand’s group for Rugby League World Cup?

New Zealand will compete in Group C for the RLWC, with three other nations also battling it out for two spots in the quarter-finals.

Lebanon, Ireland and Jamaica will all face the Kiwis during the group stage of the tournament.

Who will New Zealand play in Rugby League World Cup?

New Zealand made a winning start to their 2021 Rugby League World Cup campaign with a healthy – if not always easy – 34-12 victory over a stubborn Lebanon in Group C at the Halliwell Jones Stadium in Warrington.

The Kiwis, ranked number one in the world, overcame shaky starts in both halves following early concessions to emerge with the two points and move joint-top of the pile with Ireland following the latter’s rout against Jamaica.

It’s time to feel the rhythm! Feel the rhyme! Get on up, its rugby league time! Group C action in the Rugby League World Cup continues with the match between New Zealand and Jamaica from the Halliwell Jones Stadium in Warrington.

New Zealand have come into this tournament as the number one team in the world, and against Jamaica, this match-up seems like a blood bath. But, if there’s one thing that’s gotten in the way of New Zealand before, it’s complacency. Just looking back on the last World Cup, New Zealand were heavy favourites to knock Fiji out of the cup before fumbling their way around Wellington Stadium to lose.

While a loss here is incredibly unlikely, the big area to watch for the Kiwi’s is how the squad is rotated for this match with the Reggae Boys. Coach Michael Maguire was forced to play Jeremy Marshall-King against Lebanon after an untimely injury to Jahrome Hughes. This time around, it’ll be a chance for the likes of Scott Sorensen and Seb Kris to prove their chances for selection down the track in the big cup games. There was the occasional rust in their opening pool game against Lebanon and they needed Joseph Manu to save the day with a thrilling burst of individual play in the second half.

Jamaica made their World Cup debut last start with a 48-2 defeat at the hands of Ireland. Whilst on the surface, it appears to be embarrassing, we have to remember that Jamaica are appearing in their first World Cup and it doesn’t matter if they come first or fiftieth just like in Cool Runnings. They were competitive, conceding their first try after a tough opening quarter, the flood gates soon opened and led to the aforementioned score-line, missing a whopping 58 tackles. That task of tightening their defence doesn’t get easier with a much tougher opponent in the Kiwis.