RWC 2023 rivals, England and Argentina clashed on Saturday in London. The match was the one and one fixture between the teams during the RWC 2019-2023 cycle. Argentina were 30-29 winners. The win was Argentina’s second ever against England in England. It comes 16 years after the first in 2006.

A slow start saw more teams kicking for possession. There was no stalemate, though as a kick-and-chase resulted in a slide to regather from Mateo Carreras while Freddie Steward lost his footing. Pressure from the forwards saw Argentina awarded a penalty. Emiliano Boffelli was on target to open the scoring in the 10th minute.

England hit-back three minutes later through an Owen Farrell strike. The scores did not remain equal for long, however, as England lost the ball from the kick-off from which Argentina won a scrum and a penalty. Boffelli made it 6-3 in the 16th minute. 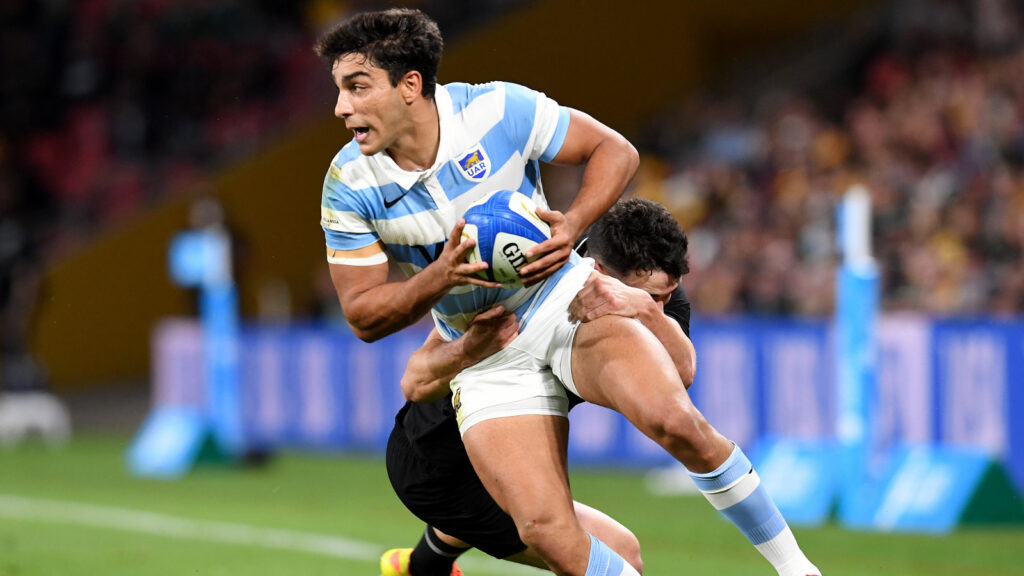 The game swung again as Argentina defended against an English onslaught. Los Pumas held off three five meter scrums and a five meter line-out maul. The fourth scrum led to a try with Joe Cokanasiga coming off his wing to power over. Farrell made it 10-6 in the 27th minute.

The teams then traded points due to Julián Montoya. First, the Pumas captain was the first man over the ball. Boffelli landed from 40 meters out on a a wide angle. Second, Montoya was penalized for tackling Maro Itoje without the ball. Additional goals to Boffelli and Farrell followed. England were four points ahead at half-time.

Following early tension to start the second-half, Los Pumas won a penalty and kicked for a 22 meter attacking line-out. What followed was a fake maul from which the ball was spun wide in a set-piece move wherein Boffelli crossed for a super try in the left corner. Santiago Carreras provided the pass assist.

Santiago Carreras went from assist provider to try scorer. The Gloucester winger but Pumas fly half showed by he can play across the backline. Following a  miss pass from England, Santiago Carreras gathered the ball and ran to outpace Freddie Stewart for the score.

England were down 24-16 and fired back to life. Replacement scrum-half Jack van Poortlviet spotted a gap to punish Los Pumas. Farrell converted to make it a one point game. He and Boffelli then again exchanged penalties as the match remained on a knife’s edge.

With thirteen minutes remaining on the match clock, Farrell landed a difficult penalty. Two points separated the teams. Argentine determination was again on show as  the forwards won the collisions and the backs used width. A retreating England was penalized from which Boffelli kicked the winning points with ten minutes left.

Argentina now travel east from London to Cardiff. Los Pumas face Wales next Saturday while England will be looking to win at home against Japan. These matches come with both Argentina and England firmly looking to Marseille; the venue where they will meet on RWC 2023’s opening weekend.