RLWC England have finished the group stages unbeaten following a 94-4 victory over Greece at Sheffield’s Bramall Lane, running in 17 tries.

Dom Young scored four first-half tries as England overcame a slow start to batter Greece 94-4 and secure their spot in the quarter-finals of the Rugby League World Cup as Group A winners.

Shaun Wane’s side scored 17 tries in total, including eight in what had initially been a scrappy first half as they went on to dominate for the final 55 minutes of the encounter. 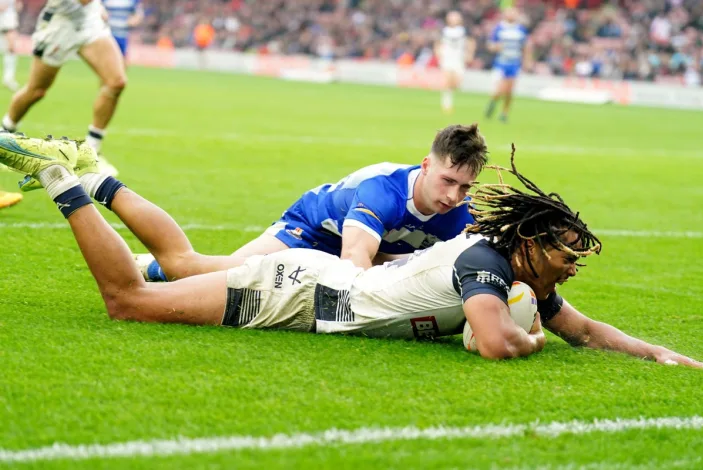 Besides Young’s efforts there were two scores each for Ryan Hall, Andy Ackers and Tom Burgess, while Marc Sneyd notched up 30 points with a try and 13 goals and had a hand in six more tries.

Matty Lees was left in acres of space to crash over for the first try after Sneyd attacked the line, and Young was soon in for his opener from John Bateman’s basketball pass.

But England’s early sloppiness was punished as Greece got over for a try of their own, Siteni Taukamo crossing in the corner after Kai Pearce-Paul had jumped out of the line to give the full-back space to run.

England seemed stunned but they eventually grabbed a third when Young crossed from a George Williams pass. That began a spell of six tries in 15 minutes as the hosts put their foot down.

Hall chased a Sneyd kick and bundled past two tacklers to score, then Burgess took Williams’ inside ball to crash over by the sticks.

Young made it 32-4 when barrelling through two defenders to dot down, then had a fourth when he took Pearce-Paul’s pass after a break from distance. Williams then followed Chris Hill’s break to dance home from 50 yards to make it 44-4 by the interval.

Let’s face it, a 90-point gulf is plenty. Remorseless stuff from England, who now shift their attention to a quarter-final at Wigan’s DW Stadium next Saturday.

England boss Wane made a handful of changes to his side that defeated France 42-18 in Bolton. Captain and full-back Sam Tomkins was rested, with Tommy Makinson named at full-back. Jack Welsby featured at centre, with Kai Pearce-Paul and Joe Batchelor both starting for their first caps.

Greece welcomed back captain Jordan Meads, who missed last week’s defeat to Samoa. Forward Billy Magoulias missed out. Theodoros Nianiakas, who featured for National Conference League side Woolston Rovers in 2022, was named on the bench.

England took less than three minutes to open the scoring. A mistake at the back from Greece forced a goal-line drop out, which gave Matty Lees the opportunity to score the game’s first thanks to a slick assist from Marc Sneyd.

Young scored his fifth try of the World Cup campaign on 13 minutes, with an assist from a dangerous-looking John Bateman.

Playing at full-back, Siteni Taukamo hit back for Greece on 18 minutes, crossing in the corner for a 10-4 scoreline with to a poor defensive read from Pearce-Paul.

But it was all England from there. Young crossed for his second try of the game on 25 minutes, this time with thanks to a lovely looping ball from half-back George Williams.

It was then the turn for the other wing, with Hall getting in on the action. The 34-year-old chasing down a kick from Sneyd to the corner to score.

Incidentally, a point of order regarding tomorrow’s crunch meeting between Samoa and France at Warrington’s Halliwell Jones Stadium.

A mild snafu on the official website originally stated that the inaugural Physical Disability Rugby League World Cup final, which takes place after that 5pm GMT kick-off, was free entry, like all other matches in that tournament.

RLWC HQ confirmed to me yesterday that this isn’t actually the case, and although the PDRL 3rd/4th-place playoff (Wales v Australia) on Victoria Park is indeed free entry, the final – England v New Zealand – is by ticket only to those who have forked out for Samoa v France.

That PDRL final is a 7pm kick-off, which will also be aired on the BBC website and iPlayer.