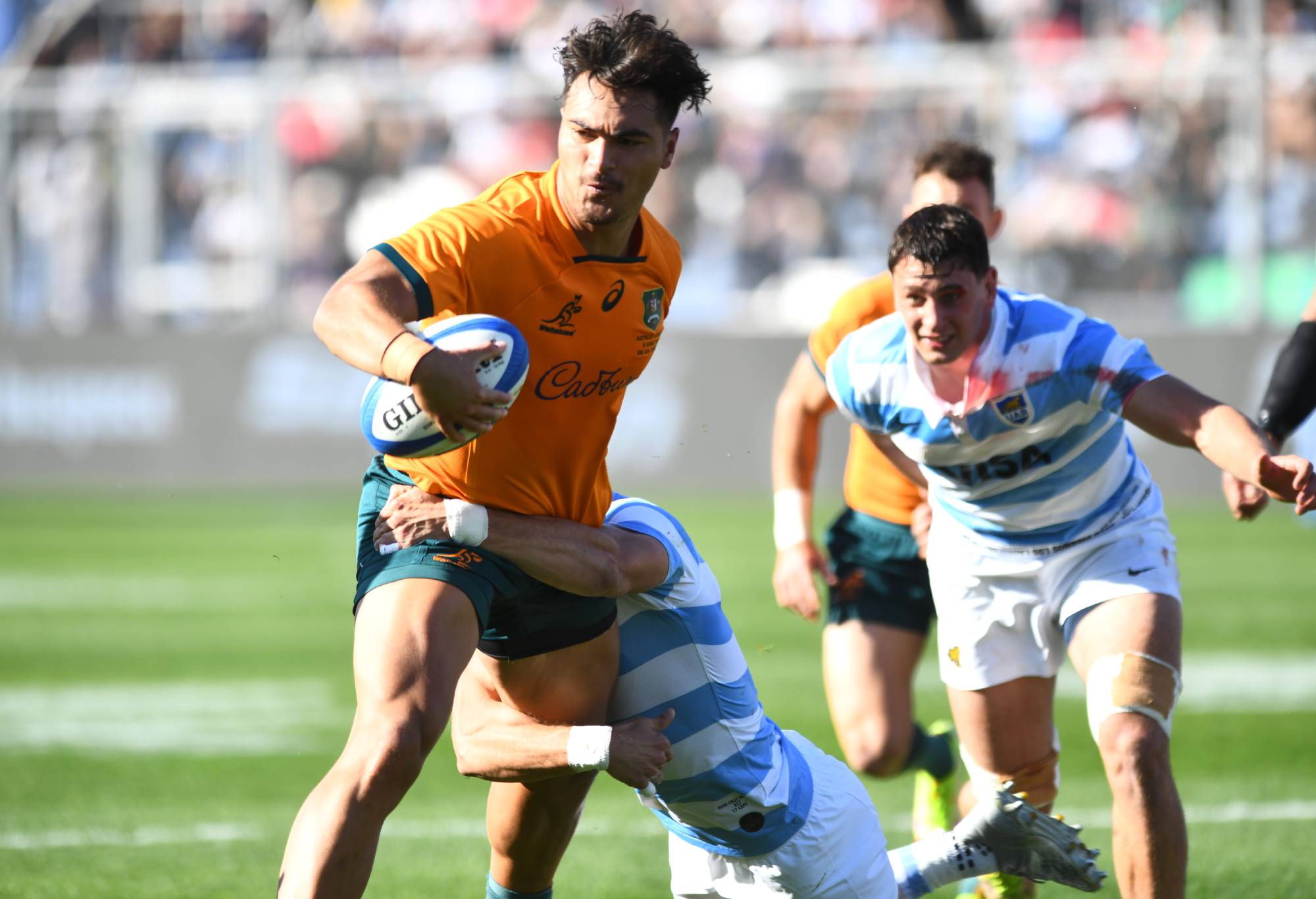 Michael Cheika’s Argentina took to the skies in an impressive 48-17 defeat of the Wallabies in San Juan with Los Pumas claiming their biggest-ever win over Australia .

Australia had the chance to go to a lead in the Rugby Championship following New Zealand’s win over South Africa earlier on Sunday but they were swatted aside and instead Los Pumas are flying high on top of the table.

Wallabies coach Dave Rennie will look to a shocking run with injuries and withdrawals before the game – he has 17 potential Wallabies on the sidelines right now – as an excuse and he will be desperate to have the cavalry return for the next two matches against the Springboks.

“Massive disappointment – it’s not good enough,” Rennie said. “We conceded four tries with kicks in behind us and got dominated in the collision area.

“We want to earn the respect of the country but you don’t do it with performances like that.”

Rennie admitted the team lacked cohesion with the changes forced on him but added: “We had a good enough side on the paddock to do the job, gave them a few soft points early on.

“We’ve got to be better. Whoever puts the jersey on has to front and we weren’t good enough.”

The Wallabies were on level terms for less than 60 seconds, as winger Juan Imhoff seized on a mix-up between Jordan Petaia and Tom Wright and raced away for an easy try.

That gave the hosts a massive confidence boost and they rode the wave, crossing again through prop Thomas Gallo in the sixth minute after a missed tackle by Taniela Tupou. The Australians were unable to match the Argentina power – “brutal, brutal play,” was Morgan Turinui’s assessment in the commentary.

Wallabies captain James Slipper, finishing off after a superb burst by Rob Valetini, cut the in the 12th minute as the frantic start to the match continued while James O’Connor knocked over a penalty to bring the margin to four.

Australia thought they had hit the front on 20 minutes when O’Connor raced over after exchanging some slick passes with Petaia but referee Karl Dickson ruled that James Slipper had infringed in the prior cleanout. “Absurd,” was Andrew Mehrtens’ verdict on the decision, and there’s no doubt it shifted the game’s narrative significantly.

“It’s great lines, great rugby, inside ball and it’s a technicality that we get pulled up on.”

Argentina refused to be rattled by the close call and roared back with tries to Jerónimo de la Fuente and Juan Martín González for a 26-10 lead.

Argentina could have gone into the sheds even further ahead, only for Marika Koroibete to produce a stunning try-saving tackle on his own tryline.

Despite Koroibete’s intervention, it was an almost perfect half from Cheika’s team after Australia changed up their tactics from the loss a week ago in Mendoza.

“What we found interesting is they changed kick plan, they’ve gone into contestable kicks, and they put us under a lot of pressure there,” said Wallaby Jake Gordon at the break.

“What we noticed against Scotland, and last week, they seem to kick a lot of pill quite long. And what they’ve done today is they’ve kicked a lot off nine and they made it contestable.

“We need to check the runners coming through and let our catchers get a clean catch because at the moment, it’s very highly contested and they’re getting tap backs.”

“Perfect game plan and it’s perfectly executed by Argentina thus far,” said Turinui. “They had 13 kicks in the first half a total of 15 the whole game last week and the contestable stuff has been brilliant.”

Toomua added: “It’s about a mental battle and it’s about staying in that fight and Cheik’s kicking game has really rewarded Argentina, just making it a scrappy game making it a couple of phases, turnover try, it’s a masterclass. They’re playing to a script.”

The Wallabies needed a bright start to the second half and they came close through Petaia, who got across the tryline after another Valetini surge but had the ball stripped out before he could place it down.

Another visit deep into the Argentine 22 on 48 minutes resulted in a turnover by the hosts, who held their nerve and were able to extend their lead through Emiliano Boffelli’s 53rd minute penalty and then a second try to Gallo, which also saw Fraser McReight yellow carded.

Dave Rennie rang the changes, including debuts for Pone Fa’amausili and Billy Pollard, and on 67 minutes Len Ikitau was able to cross after some poor defending.

The Wallabies kept pressing but instead it was Los Pumas who iced the match with two late tries.

“Tactically outplayed, outplayed on effort areas, every little moment of the game,” said Turinui. “Michael Cheika has found a real recipe for success.”

Slipper said” “We’re clearly disappointed off the back of a good performance last weekend – we really wanted to back it up. Probably fell short of standards today.

” I thought the Argentinians were pretty good at it, and they got the momentum. They’re a tough team to play catch up footy against. Full credit to them, they were tough.”