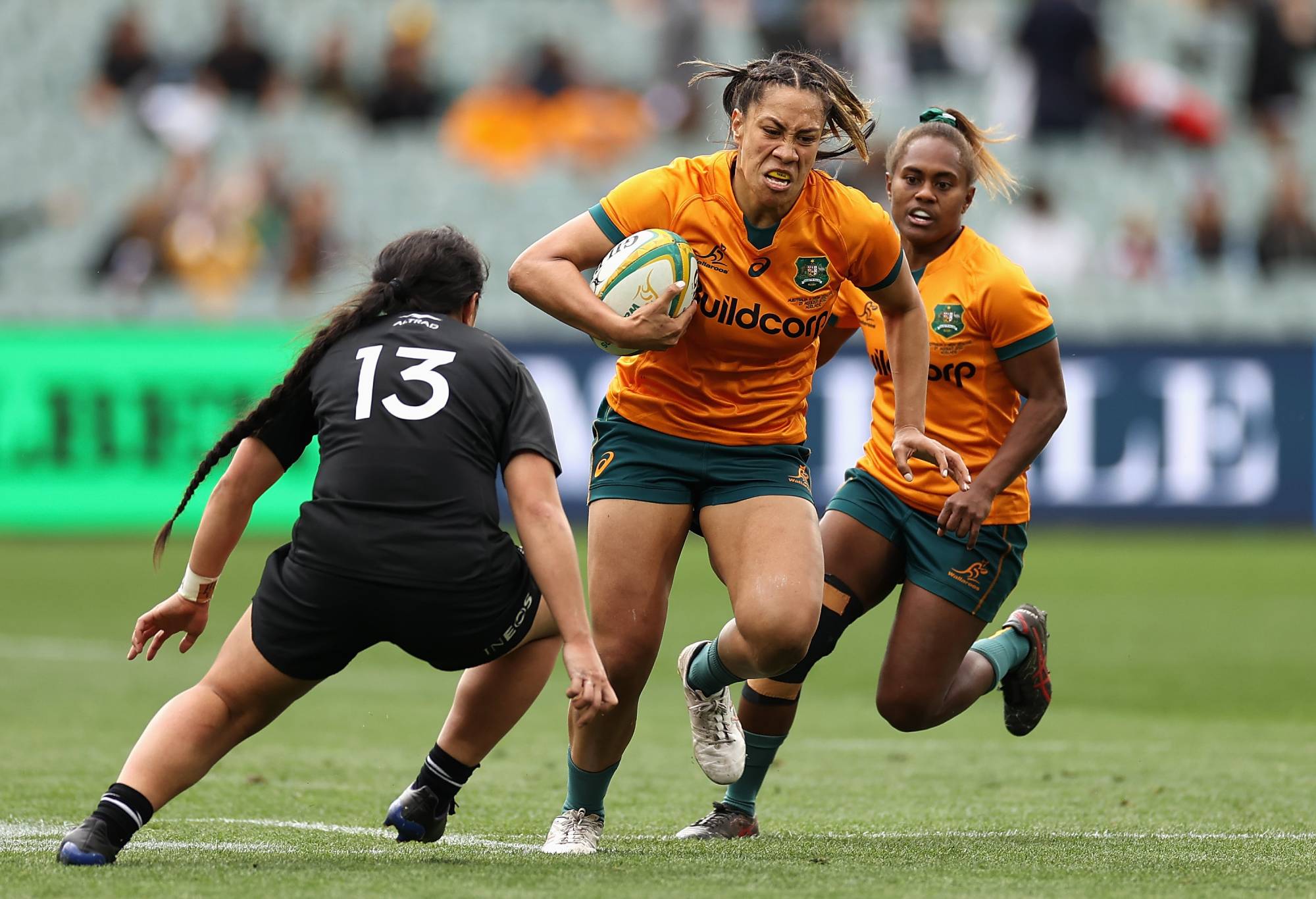 Australia’s Wallaroos were much improved in their second Test against New Zealand but the reality is they remain well behind their trans Tasman rivals and face a daunting prospect at the World Cup in six weeks.

After a 52-5 humiliation a week ago, the Wallaroos responded with a much improved effort, leading through 25 minutes until being overwhelmed 2214 at Adelaide Oval, a try with ten seconds to go adding some gloss to the scoreline.

The Wallaroos haven’t beaten their Kiwi rivals in 22 attempts and will open the World Cup against them in 42 days.

Australia started promisingly, and should have scored in the sixth minute when Emily Chancellor drew in the defence and passed to debutant winger Bienne Terita, only to watch the newcomer drop the ball with the try line wide open.

Terita didn’t have to wait long to make amends as Chancellor again did the lead up and the winger was relieved to hang on to her second chance and touch down in the corner. Flyhalf Arabella McKenzie converted a difficult chance and the Wallaroos led 7-0.

Terita also capped the game with a double, a stunning left foot step allowing her to break two tackles on the way to the try line.

Black Ferns’ Chelsea Semple was sickeningly knocked out in the lead up to the try, getting a tackle all wrong and falling like a tree trunk, banging her head heavily on the turf. Semple was able to stagger off the field under assistance but received a yellow card as she took her place groggily on the bench.

Siokapesi Palu of the Wallaroos makes a break. (Photo by Cameron Spencer/Getty Images)

New Zealand responded but Australia fought hard to stem the tide against some creative attack, inside passes and chip kicks from the Black Ferns backline stars probing for openings.

Ruahei Demant kicked a penalty on 20 minutes and then Luka Connor put the visitors ahead scoring from close range.

The Kiwis went to the break up 10-7 but there was a lot to like in the Australian performance.

“There was a period eight minutes before halftime when the Wallaroos were defending their line and they turned over the ball,” said Allan Ferguson on the Stan Sport commentary.

“That showed a lot of grit and a lot fight, and with that some brilliant technique in the way they’ve defended. They’ve absolutely turned up and this scoreline proves it as well.”


International innovation: How France and Argentina solved their most glaring issues from 2019 ahead of another World Cup


‘Far out, this could be anything’: When the Wallabies faced down a lion tamer, and Adelaide witnessed a mauling


‘It’s not working’: Will the Wallabies ever show they understand what Dave Rennie wants from them?

“We talked about the Black Ferns before the game and how relaxed they looked, maybe they underestimated the Wallaroos a little bit

“The Wallaroos have really turned up in the contact areas, the work rate areas as well,” Mitchell said at halftime. “Discipline can probably be addressed but otherwise a really strong performance by the Wallaroos.”

If the Black Ferns did come in with complacency it was blown away in a dominant second half. Australia spent long periods pinned deep in their own territory and looked gassed with half an hour to play.

Flanker Chancellor was Australia’s best in a difficult second half as the Kiwis dominated possession, and she came up with five turnovers.

“There have been some really strong elements to the Wallaroos game but in territory and possession they’ve been dominated,” said Morgan Turinui. ” The work rate has been outstanding but there’s only so much you can do in holding on and there is a lesson there around set piece and how the Wallaroos, with the kicking game and tactics, can try and play the game down the right end of the field.”

The Black Ferns’ former world sevens player of the year, Ruby Tui, was electric, and just as flash in her post match interview with Justin Harrison, where she praised the Wallaroos and teased the former Wallaby about stealing his first name from Justin Marshall.

“I want to give props to the Wallaroos for growing rugby over the ditch,” Tui said. “I know it’s not easy for women over here but far out look what they did in one week, goes to show, do a bit of study, and they really gave it to us.”

The Kiwi players are semi pro, in contrast for the amateur Australians, who have battled funding issues in the past few seasons, limiting their opportunities in matches and camps.

“It’s amazing and I want to shout out to everyone who’s jumped onto women’s rugby this year,” she said of the double header in front of an enthusiastic pre-Wallabies crowd.

“Ten years ago this was nothing so it’s so inspiring the people out there are putting their hand up and say we want to support the other half of the demographic as well.

“Thank you to Australian rugby union and World Rugby for putting this on.

“The rivalry between Aussie and New Zealand is more than words, it goes really, really deep and I think it’s something we should be proud of.”

The Kiwis go into the World Cup in good shape and Tui raised the work of coach Wayne Smith.

“Shout out to Smithy, he put his hand up and said I give a damn about women’s rugby and there’s been so many Wallabies, All Blacks sending messages, people jumping on board and backing us, it means heaps. Making us amazing players and better people. I’ve never experienced anything like it.”

‘Far out, this could be anything’: When the Wallabies faced down a lion tamer, and Adelaide witnessed a mauling
CHEIK MATE! Historic firsts for Argentina and their Aussie coach as Foster’s All Blacks plunged back into crisis
Go to mobile version