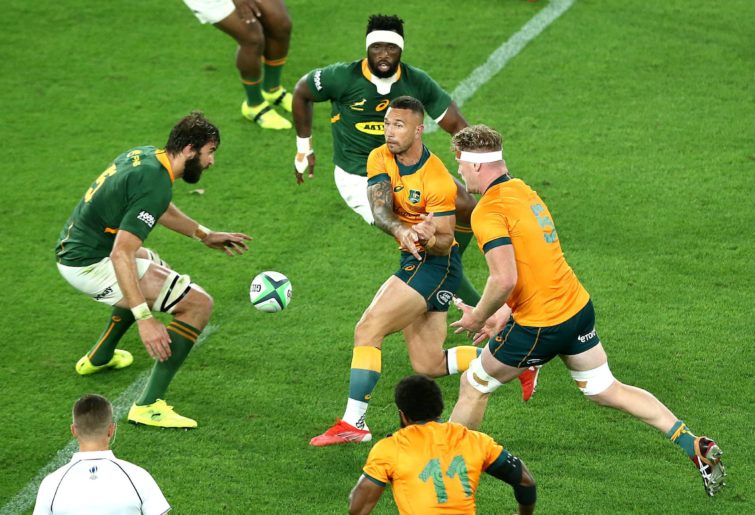 South Africa are physical and will rain box-kicks down on you all game. It’s the same game plan that won them the 2019 World Cup.

But muscling-up upfront and defusing their aerial bombardment is only half of the job. The Wallabies must have one eye on neutralising the Springboks’ gameplan and the another on applying their own.

Running rugby is the Wallabies’ blueprint and in all the games except the loss in San Juan, they have picked their way through defences and put themselves in positions to score points. Keeping the Boks in play, preventing them from setting their meandering pace of set-piece, two phases if nothing happens kick and then pounce on the chaos caused, is vital.

They are a team who likes playing without the ball, so the Wallabies should exit their own half but look to keep the ball in play. This will force the Springboks to make choices, increasing their margin for error.

The Springbok gameplan works because they are the biggest in the yard and everyone knows exactly what to do. Matching their physicality is essential but Dave Rennie’s men are fitter, faster, and should look to keep-up the tempo.

By keeping the ball in play, Rennie’s men can prevent tactical water breaks, staunching the communication from coach Jacques Nienaber from reaching the players. The Springboks will fatigue, providing lapses in decision making and chinks in the Springbok defence.

Fatigue set in quickly for Springbok stalwart Duane Vermeulen at Ellis Park and there were early replacements for the South African front row. Richie Mo’unga kept the ball in play brilliantly and the All Blacks played phase after phase, not necessarily going forward but it kept the game at their pace. Clinical cleanouts and quick ruck times also blunted the Boks’ rush defence.

The green wall that is South Africa’s defence is an almost perfect machine, with a rush and push that invites teams to go wide only for them to realise they’ve run out of room and depth. If you can’t around it, you can go through it and perhaps over it.

In 2021 the Wallabies found a way to punch through the defence, realising an over ambitious shooter leaves a split second to beat the fold. This was the case in the first try of the first test. Faf de Klerk missed a tackle on Samu Kerevi and Kerevi could then put Andrew Kellaway in the corner.


‘If I knew the answer, I’d be the head coach’: The crippling issue Wallabies must solve against Springboks


Can luck and cohesion bring the Aussie Sevens men a World Series title?

The Wallabies then found a second way through with a pass inside exposing the rush instinct and turning that second of disjointed play into a gap. This happened when front foot ball allowed Tom Banks to flick a pass inside sending Marika Koroibete through a half-hole.

Turning around the Boks rush defence with kicks over the top or along the ground will at least put them in two minds and force their lumbering forwards to backpedal if only a few metres.

Teams spend more energy on defence than they do attack, more energy retreating than advancing and make mistakes when fatigued.

None of this will matter if the Wallabies’ forwards don’t do the business upfront and the back three diffuse the highball. But the Wallabies must implement and follow their gameplan: exit their half with a long kick, be clinical on attack, cherish possession, and don’t piggyback the Boks down the field with ill-discipline.

This year the Wallabies have started slow and finished fast, scoring most of their points later in the the game. A fast start and a ruthless middle should allow for an improved Wallabies to implement their blueprint.