Noah frills: Lolesio gets first shot at Boks, told exactly what he must do to nail down No.10 jersey 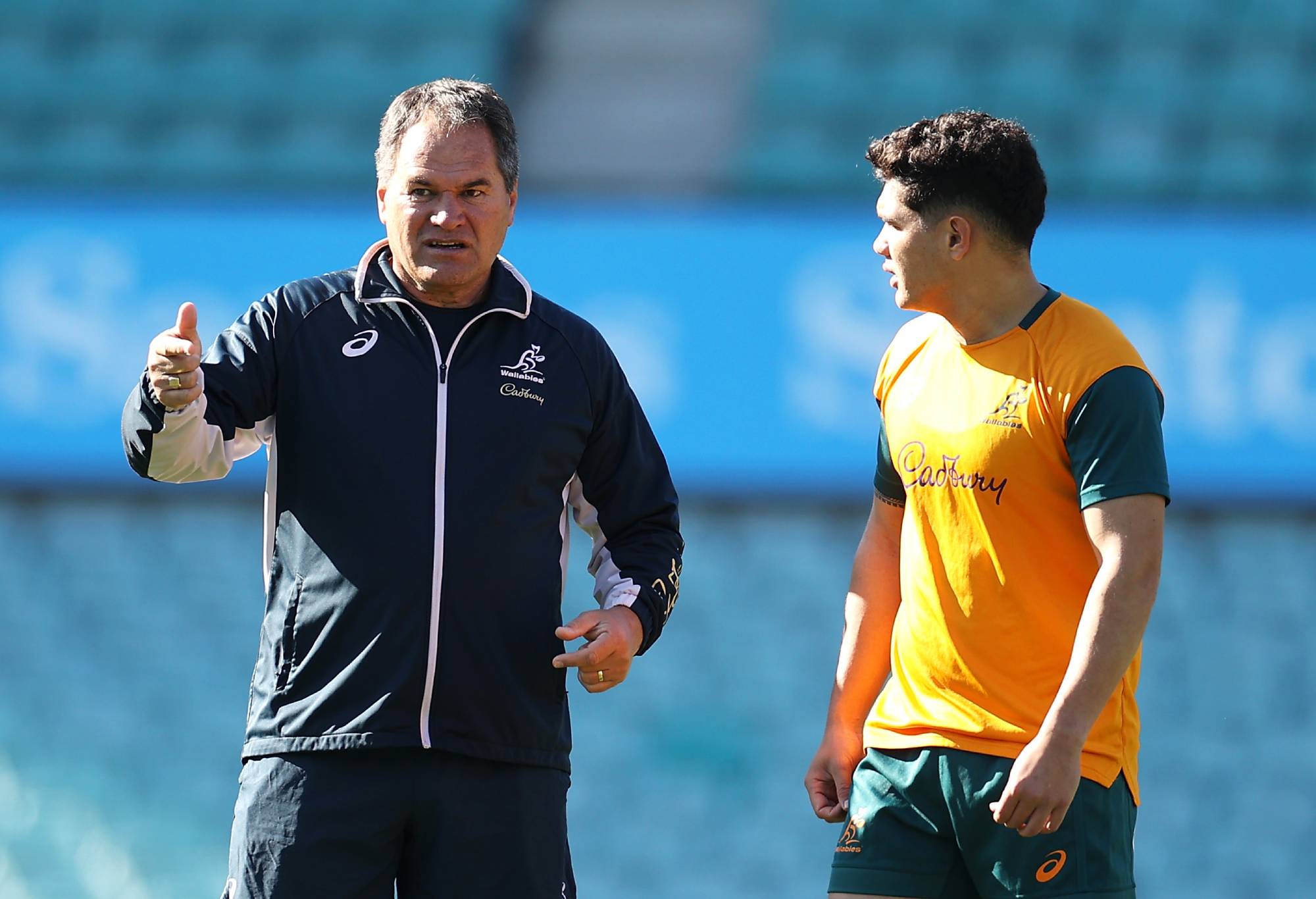 Noah Lolesio has been given clear directions on how to go from stop gap to main man when he wears the Wallabies No.10 jersey into battle against the Springboks in Adelaide on Saturday.

Wallabies assistant coach Dan McKellar, who was previously Lolesio’s head coach at the Brumbies, said Lolesio “gets his chance” to take the keys to the Wallabies’ attack, despite the presence in the squad of Bernard Foley.

Judging by McKellar’s advice, Lolesio would do well to imagine those keys belong to a minivan used for driving littlies to and from primary school, rather than an expensive and powerful sports car.

The injury in Argentina to Quade Cooper saw Foley come into camp but he is considered short of fitness, having last played three months ago. Lolesio has been in and out of the Wallabies team, and was overlooked for James O’Connor in San Juan where Australia were thrashed.

O’Connor was brutally sacked from the squad altogether after Dave Rennie said he failed to execute the game plan in a “clunky” performance, giving Lolesio yet another shot at winning over his coach.

“He’s trained well while he has been in the side. He was close to playing in Argentina. But that’s a position that hasn’t been nailed yet by an individual or owned,” McKellar told reporters. “He gets his chance this week.

“He’s got [Nic White] on his inside who he knows very well – they’ve got a very good combination, have played a lot of footy together, so that should be really good cohesion.

“Now he’s just got to go out there and do his job within our plan.”

Asked if he felt Lolesio has the tools to make the position his own, McKellar said: “I think so. My advice there is he doesn’t need to go there and think he needs to be the best player on the field.

“Play the game in the right areas of the field. That’s what his job is. If he does that and he’s really solid that’s a tick in the box for him. So I don’t think it’s about him going out there thinking he’s got to create a whole lot of opportunity for others. It’s just about doing his role well.”

Saturday’s game is a massive one for a chastened squad – players and coaches alike. They’ve had an extra week to stew on the 48-17 scoreline from San Juan, and there has been an extra edge to their sessions.

“At the meeting [on Tuesday] we were holding them back, they were keen to get out there and get stuck in and right some wrongs,” said McKellar.

“We had a good start to our preparation and it’s got to continue through the course of the week to ensure we earn some respect on Saturday afternoon.

“We took significant steps forward in the first Test and it was probably our best performance as a pack. Then we had some late change and hurt ourselves at key times – a lineout turnover at a critical moment.

“That’s across all areas, whether it’s in and around the tackle area, or defence, scrum time. We were pretty filthy about how we performed in San Juan and know that if we toss it up again, then we’ll be disappointed again Adelaide.”

He said it was important for the group to have solidarity in the face of a let down.

“That’s Test footy. It’s hard. You’re always going to have these periods but you’ve got two choices. You can bitch and moan about it and point the finger and blame others or you stick tight and  together and understand that, take on board feedback, make little adjustments around some effort areas, some attitudinal areas and you can turn things around very quickly.”

McKellar was asked about the differences between being a coach at Super Rugby and Test level.


Noah frills: Lolesio gets first shot at Boks, told exactly what he must do to nail down No.10 jersey

“For Australia, you feel like you’ve let the nation down and the rugby community down. So it’s certainly been a long couple of weeks since our last game and I speak for all players and staff that they really feel that and we’re determined to change that.”

Rennie was clearly upset with the way the Wallabies folded against Michael Cheika’s team, but was handling the pressure well, according to his forwards coach.

“He’s pretty calm, pretty level headed, Dave,” said McKellar. “He was disappointed and frustrated with the performances, no doubt. As we all were.

“Dave’s greatest strength is the previous week, he didn’t get too far ahead of himself off the back of what was a good win in Mendoza, and equally he hasn’t gone too far the other way off the back of a disappointing performance in San Juan.

“We know that we need to be better. His message is very calm and composed and controlled and clear. It’s not ranting and raving and I don’t look at Dave and think that he’s stressed. He’s just wanting to ensure that we as a coaching group prepare the players as best we can to to win on Saturday afternoon.”

As for his own feelings after the San Juan setback: “When you’ve got a bye or a week off it certainly hangs around. We’re human beings you certainly feel it. You feel like you’ve let the country down.

“But that’s why we’re in this position. I like to think as coaches that sometimes you do your best work when you’ve got to face adversity. That’s when you’ve got to lead and  guide the players the best you can and enjoy that challenge.”