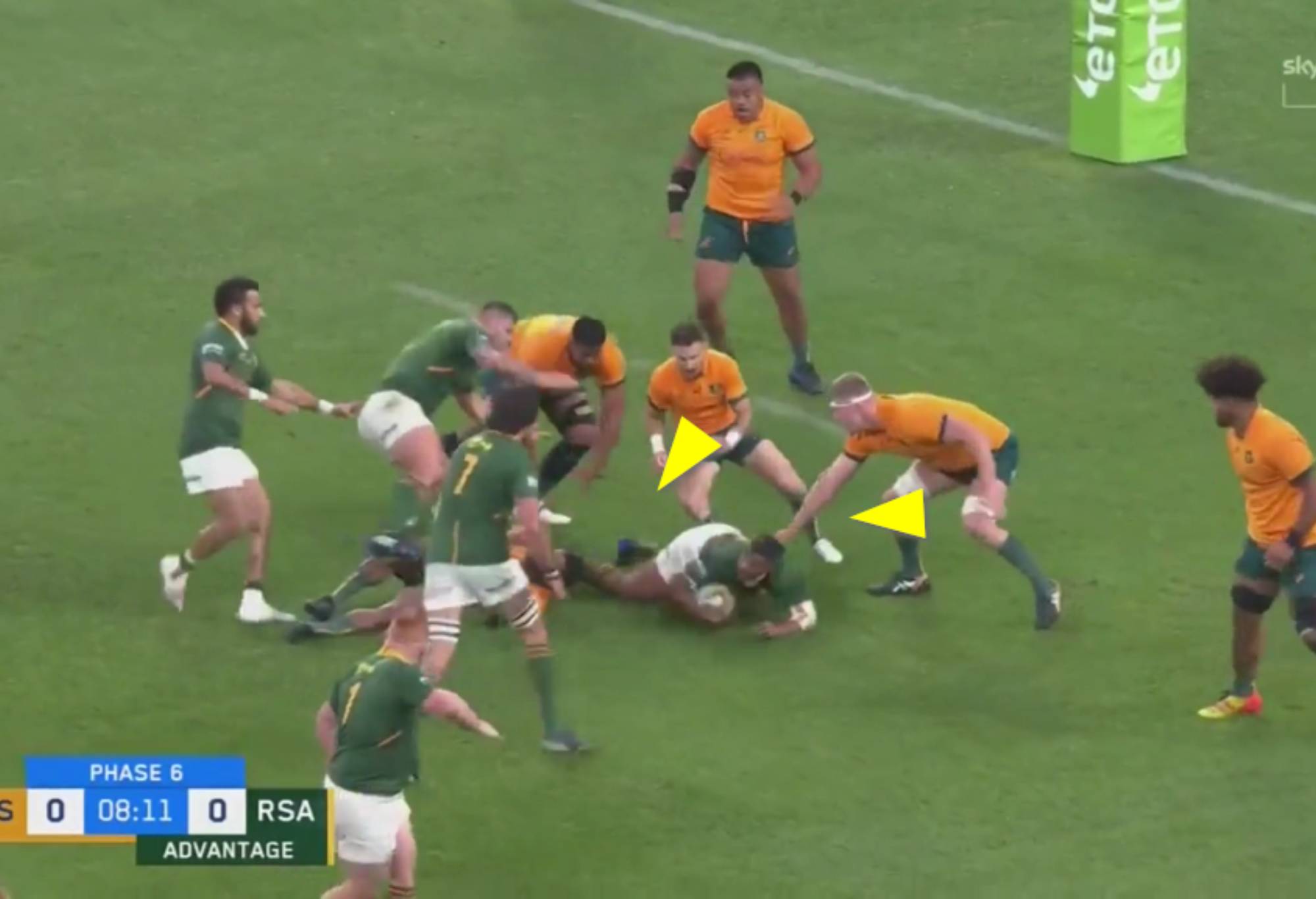 There is a big black cloud looming on the horizon for the Wallabies.

New Zealand are about to undertake their usual Bledisloe Cup tour of Australia, and once more will demand rugby fealty. They will silently require that Australia bend the knee and kiss the hand of the dark Lord and admit that they are second best. In rugby terms at least, a satellite orbiting the shaky isles

Over the last two rounds of the Rugby Championship, it has become clear that there is one priority Australia will have above all others. The Wallabies will need to find ways to get the ball off New Zealand, because the All Backs will not give it to them once they have got it.

That is the way of an attack coached by Joe Schmidt, Ian Foster’s new assistant coach. Over the last two games against Argentina, Schmidt’s attack dominated possession, owning 40 minutes of the total ball-in-play time of 69 minutes. It built 228 rucks in the process, and forced the Pumas to make a mountainous 369 tackles over the two matches.

Argentina back-rower Marcos Kremer made 26 tackles by himself in the first game at Christchurch and 41 in the course of the double-header. Those figures would comfortably place him at the head of the Wallabies’ tackling charts after all four rounds of the tournament so far.

In order to play a game, Dave Rennie’s charges will have to devise ways of taking the ball away from New Zealand when they want to keep it, and they rank dead last in the rankings in this particular aspect of the game:

Less than two breakdown turnovers per game represents a moderate output, to say the least. The world leaders in this aspect are France, who won 28 ruck turnovers at an average of 5.6 per game in the Six Nations tournament at the start of 2022. They were spread around 10 different players, three of whom were backs.

France’s number 8 Greg Alldritt was top with six takeaways, while centre Gaël Fickou and wing Gabin Villière both had four. Interestingly, the player France pick as their nominal number 7 (François Cros) only made one pilfer. The French don’t care, because they can get turnovers from at least seven other starting positions on the field.

There is also a lesson to be learned from Australia’s rugby neighbours from across the Tasman in this respect. One of the harshest learnings from 2022 for the All Blacks is that their incumbent number 7 and skipper Sam Cane is no longer a force at the defensive breakdown, at least not on the pilfer.

Cane only won one turnover in the July series against Ireland and none at all in the first four rounds of the Rugby Championship. New Zealand have adapted to the facts. They have narrowed their captain’s role down to tackling and counter-rucking, and moved the pilfering burden on to forwards like Ardie Savea and Sam Whitelock:

Cane makes the first tackle, then Savea and Whitelock make the pilfering attempts at the next two rucks.

In the return match in Hamilton, the All Blacks had no steals on the ground but they did enjoy five winning counter-rucks by way of compensation:

In the first example, Scott Barrett and Sam Cane immediately launch into a powerful counter-ruck after a kick-off chase by Will Jordan. In the second, there are three backs – Jordan, Richie Mo’unga and Aaron Smith – leading a winning counter-ruck against three Argentine forwards (Thomas Gallo, Julián Montoya and Pablo Matera). All for one, and one for all.

What wouldn’t the Wallabies give for the return of the infamous ‘Pooper’ ahead of the game in Melbourne? That combination of Michael Hooper, David Pocock and Scott Fardy in the back row, who were all so proficient at turning ball over on the deck.

The problem for Australia in a nutshell, is that they are still too dependent on their open-side flanker as their main source of steals. Where Cane has handed on the pilfering duties to players like Savea and Whitelock in order to concentrate on making tackles – leading the All Blacks with 43 after four rounds – the Wallabies are still at the stage where their top tackler (number 7 Fraser McReight, with 35 tackles) is also their top jackler (with two pilfers).

With the speed at which modern rucks are completed, you need one defender to make the tackle, and a second (typically, the so-called ‘assist-tackler’) to make the pilfer attempt. It can look something like this – from the second match between Australia and South Africa in Sydney:

McReight plays slightly off the line, assisting on the tackle but ready to have a dig at two consecutive rucks. At the second of the two breakdowns he gets a good lift on the ball and would have been rewarded with a penalty by referee Ben O’Keeffe, but for the Springboks already playing under advantage in the sequence.

It has been an issue ever since David Pocock’s retirement. Outside McReight and Michael Hooper at number 7, the Wallabies do not have any dangerous on-ball threats. There are some (like back-up lock Darcy Swain and returnee hooker Tolu Latu) who may be developed in time for the World Cup, but right now the open-side flanker is very much on his own.

At the first ruck there is some separation between the ball-carrier and his support and therefore a pilfering chance, but neither Nic White nor Matt Philip look totally convinced by it. At the second, hooker Folau Fainga’a has a dig but loses his feet and gives up the penalty in the process. Hooker is one spot where Australia can improve at the breakdown, if they can get either Latu or Brandon Paenga-Amosa fully fit and firing over the next 12 months.

With McReight overloaded by his twin responsibilities, South Africa profited by the simple expedient of drawing him as the primary tackler:

This is a basic example from a first phase Springbok lineout. Australia wants Noah Lolesio to make the first tackle so that the ex-Junior Wallabies skipper can drop slightly off the line and take a shot at the ball on the ground, but Siya Kolisi cleverly angles his run back to engage McReight and give Steven Kitshoff an easy cleanout target.

The same principle became ever more important on longer attacking sequences, which illustrated just how much work McReight has to get through in his dual role:

McReight makes the first tackle and then the third, and that allows the Bokke to build some momentum and engineer a clean break between Damian Willemse and Lood De Jager. The Wallaby number 7 finally gets back to join in a double jackalling attempt with Fainga’a which draws a penalty for side entry on Willie Le Roux.

The same idea created another clear scoring opportunity for South Africa in the second period:

McReight is tied up in the initial double tackle with Rob Valetini. That enables South Africa to shut him out of the contest and build impetus on the following phases, unmolested.

With the Australian number 7 out of the game, they created a chance on the other side of the field, only botched by Le Roux’s preference for the spectacular long pass.

If the Springbok full-back simply links with the two players (“1” and “2” outside him, the Bokke probably walk the ball in. Instead, the speculator to Makazole Mapimpi (“3”) was intercepted by Tom Wright.

The upcoming double-header against New Zealand will be a test of defensive starch for the Wallabies. The attack pattern, which Schmidt has imported from his last days as Ireland coach into the All Blacks, will demand intense concentration as the phases mount up, and an eye for the turnover opportunity when it presents itself.

Open-side flanker McReight has already shown that he is a worthy successor to the likes of Hooper, Pocock and George Smith in the blue riband position in 2022. He is top of the pops in tackles and pilfers made (35 and two respectively), second in minutes played for an Australian forward (267) and third in forward carries (21).

He has fully justified Dave Rennie’s comments towards the end of the Super Rugby Pacific season, when he said: “Fraser has been outstanding. His continuity game has just gone to another level, and as we know he’s very good post-tackle, although he needs to make sure he’s disciplined around that. He’s worked really hard on his defensive game so he’s doing everything he can.”

But he cannot do it alone. Even though Valetini has weighed in with 27 tackles of his own from number 8, Australia has gotten only 10 out of Jed Holloway at number 6.

The Waratahs’ second row has provided excellent value at lineout time (15 takes and one steal), in maul defence and on the carry (27 carries for 107 metres, second behind Valetini), but Rennie may need ‘tackling machine’ Marcos Kremer-type figures for the double-header versus the men in black.

He also urgently needs to find defenders who can offer McReight at least some help at defensive breakdowns. Class-leading Argentina currently has four players – back-rowers Kremer and Matera, hooker Montoya and centre Matías Moroni- who have made more turnovers on-ball than the top Wallaby. McReight cannot be expected both to make the tackles and then dig for the jackals. It represents a massive work overload.

It is not an easy balance to strike in the selection of the back five. Somehow Rennie has to find more defensive production without losing the lineout, which has been a consistent thorn in his side in 2022.

Ex-Wallaby head honcho Michael Cheika for one, will be looking on with great interest: he came out of two Tests in New Zealand well in credit as Pumas head coach, winning one of the games and racking up ten turnovers at the breakdown.

He also had the ‘Pooper’ in his back row with Australia; in that area at least, the likes of Michael Hooper, David Pocock and Scott Fardy would be welcomed back with open arms to the green-and-gold right now.