ANALYSIS: How break downs at the breakdown cost the Wallabies, and the changes needed before ABs clash 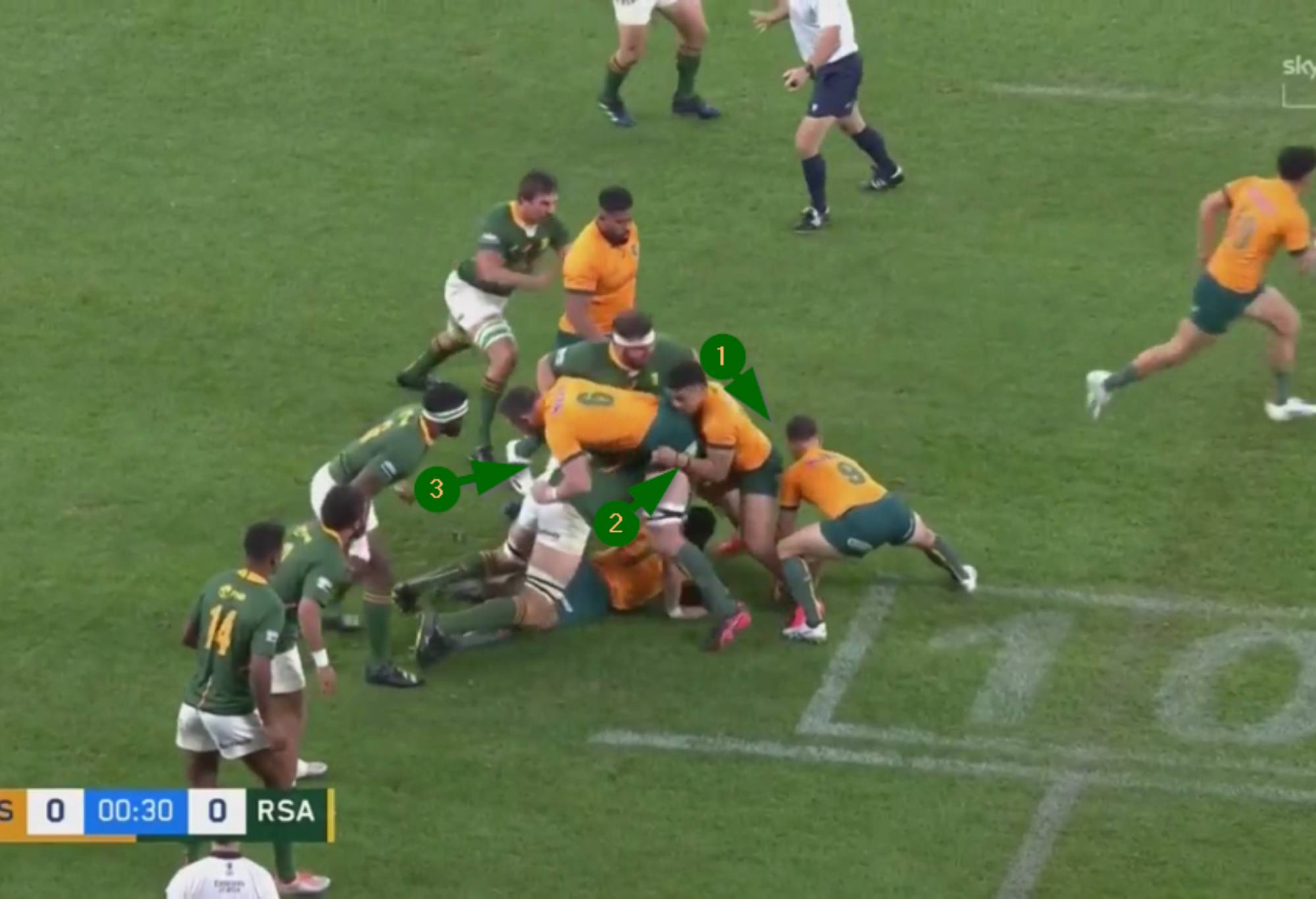 It is not often that you get a word of sense out of a player coming off the field in the middle of an intense Test match. The black bulge of a microphone suddenly appears under his or her nose, and they blurt out a few banal soundbites. All they really want to do is get off the paddock, recover and listen to what the coaches have to say.

Australian second row Matt Philip proved to be a very pleasant exception when Tim Horan buttonholed him at half-time in the gleaming, refurbished Allianz stadium arena in Sydney.

When asked for an instant diagnosis of a first half which the Wallabies had lost 12-3, the Wallaby lineout captain did not press the auto-pilot button. He said something sensible instead, and cut straight through all of the white noise to the major issue: “It’s our discipline. We can’t give the Boks – a world-class team – that many penalties, that much territory.

“They are putting us under a lot of pressure. We hung in there, but it is not good enough.

“It’s all within our control. It’s in our discipline and our contact area. That’s it.”

Dave Rennie supported the same view of events after the game had finished.

“South Africa were very good. They choked us down the far end of the field and we lost collisions early, and that was frustrating and gave them momentum.” said Rennie.

“There’s a series of penalties which mean we got the yellow card [to Matt Philip] and so we got put under the heat early. Even without a lot of ball we rallied pretty well I thought in first half, and it was disappointing to give up a try right on halftime…

“International rugby at the moment is so tight and you’ve only got to be a couple of cogs off and you’re going to end up finishing second and we’ve seen that right throughout this Rugby Championship.

It always seemed likely that the nations in the 2022 Rugby Championship would gravitate towards two wins and two losses after four rounds of the tournament. The truth is there is no one outstanding team in the tournament, nobody who stands head and shoulders above all the others.

New Zealand were crushed by South Africa in Nelspruit, then promptly returned the favour at Ellis Park. Australia beat the Pumas by 40 points one week, then lost by 40 the next. And so it has continued, in the second set of matches between Argentina and New Zealand, and Australia and South Africa.

With all four teams evenly matched, emotional edge and content on the day has been everything, and that means the contact area. The ability to control your aggression and use it to your advantage in contact situations has been the most obvious factor in winning games, and it was no different over the weekend. New Zealand and South Africa had that extra cutting edge and it carried them both over the finish line in conclusive fashion.

At the brand-new Allianz Stadium, South Africa got the game they desired and the one that Australia most wanted to avoid. It was a stop-start match punctuated by 57 kicks out of hand, 27 penalties and three yellow cards, and that suited the big Springbok forwards down to the ground – literally. Fluid, it was emphatically not.

Fourteen of the penalties awarded by Kiwi referee Ben O’Keeffe derived from the breakdown. Six penalties went against the attacking team with the other eight awarded for illegalities by the defence, and that is an unusual distribution. Typically, offences will run in the attacking side’s favour by a ratio of anywhere between three to two, to two to one. After all, the attacking side controls most of the scenarios, by deciding how and when to take the ball into contact.

Right from the start, it looked like South Africa were very much better prepared for O’Keeffe’s style of ruck officiating than the Wallabies. The Springboks were smart: having lost the aerial battle against Reece Hodge and Marika Koroibete in Adelaide, they looked to attack the ball on the deck after the receipt had been made. First, over Koroibete:

The Wallaby wingman makes a great catch on the retreat, but instead of dropping out into the defensive line, the Springboks look to add a second man to the ruck, with Frans Malherbe entering the contest immediately and the tackler (Lood De Jager) making a strong effort to reload off the floor; then a third, with captain Siya Kolisi adding himself to the counter-ruck once traction has been gained. The ruck finishes with the two Wallabies (Jed Holloway and Noah Lolesio) overwhelmed physically by three men in myrtle green.

Something similar happened when Reece Hodge made another excellent take near his own 22 only four minutes later:

As the first two cleanout players, neither Nic White nor Fraser McReight are effective at removing Steven Kitshoff from the contest above Hodge and the ball spits out for Jasper Wiese to regather, and penetrate deep into the Wallaby red zone.

Australia did not get the win bonuses from their excellence in the air that they enjoyed in Adelaide, and they lost A1 attacking positions from lineout far too early in the phase count:

It is the job of the first man at cleanout to identify and drive off the main threat, but Fraser McReight sells himself far too early to the space above the runner. That enables Siya Kolisi to sidestep neatly, and latch on to the ball unmolested. It was one of three takeaways at the breakdown that the Springbok skipper enjoyed in the course of his best performance since the 2019 World Cup final. Kolisi was everywhere in attack and defence, and McReight could not match him on the day.

The Wallabies successfully reversed the lineout trend from the Adelaide Oval, winning their own ball cleanly and even shading the Springbok lineout in steals, but the accuracy of the first and second man at cleanout time fell away as the set-piece improved. South Africa won the quick ball battle at the ruck and they won the steals by four to nil.

The Wallabies have just plundered a Springbok lineout throw, only to give the ball straight back again at the first ruck. There is nothing wrong with Damian De Allende penetrating past Bobby Valetini and hooking the ball back with his foot. He is bound in, he is on his feet and he is playing the ball backwards as the law requires, not forwards.

At other times, Australia were lucky to survive some of the refereeing calls which masked the inefficiency of the work done by the first and second man at cleanout time.

Steven Kitshoff is not doing a lot wrong, but nonetheless he was pinged for having his hands ahead of the ball on the ground before pulling them back on to the pill by O’Keeffe. It was a marginal call.

The major cleaners for the Wallabies were Valetini (21), McReight (16) and Allan Alaalatoa (13). The Brumbies skipper experienced an unwanted throwback to the end of year tour, and his use of the forearm on early-man cleanouts:

Remember this incident from the game against Scotland?

The big tight-head may have to adjust his technique to avoid more refereeing censure. It is easy to build a reputation for such things, and much harder to dismantle them. It was not the only instance of the Wallabies going too far to restore the lost breakdown balance, either.

Another clean first-phase lineout win, another failure at first-man cleanout, this time with replacement hooker Dave Porecki having to shift on to a neck-roll to remove ‘Kwagga’ Smith, and drawing the penalty on review.

The Springboks won a higher ratio of lightning-quick ball than their opponents, and it was instrumental in their third try, which put the fate of the match beyond any doubt:

No contest, no problem. Lightning-quick ball at the first ruck, and space out wide. A try in the corner, and redemption for Makazole Mapimpi on second phase.

In the battle between relatively evenly-matched teams, the attitude to, and emotional cutting edge at contact situations usually decides the outcome. And so it was, on the fourth weekend of The Rugby Championship.

The All Blacks won 96% of their 107 rucks built against the Pumas at the FMG stadium in Waikato and two-thirds of their ball was lightning-quick. End of story. The Springboks won the lion’s share of quick ball and the breakdown steals by 4-0 while picking up three other penalties for cleanout offences by Australia. In a match dominated by ill-discipline and ill-temper, that was all she said.

The Wallabies are still very much in the hunt for the title, but more repair work is needed for real consistency of results to be achieved. Yes, Taniela Tupou’s invisible injury while sitting on the bench didn’t help the 6-2 split, and neither did the head knocks to Hunter Paisami and Noah Lolesio.


ANALYSIS: How break downs at the breakdown cost the Wallabies, and the changes needed before ABs clash


WILL GENIA: There’s no escaping the reality – the nature of that defeat means Noah needs to be held accountable


WILL GENIA: Players, not Rennie, at fault for Bok shocker but time for KB and Foley to restore spark and composure

But as the lineout improved, so the work in contact went backwards. The inefficiency of the cleanouts by first and second man meant that the weakness was simply transferred elsewhere, from winning the ball at set-piece to winning it at the first breakdown. Even the Wallabies’ evident superiority in the air was hobbled by the Springboks’ will to compete for the ball on the ground.

The Wallaby collision coach ‘Lord Laurie’ Fisher has plenty on his plate before the All Blacks arrive at the Docklands stadium in Melbourne on 15th September, for the first of two Bledisloe Cup games. The referee for that match will be Frenchman Matthieu Raynal, who is known for his laissez-faire attitude to the breakdown, so things will not get any easier for the men in green and gold.

They will need a soupçon of Eben Etzebeth’s ‘face of fury’ in order to succeed – some of that eyeballs-out intensity, but controlled within the framework of technique, properly-applied. If they can fit all the pieces of the puzzle together on the same day, they will be a chance to win not one, but two trophies by the end of September. That would be enough to put a smile on even Dave Rennie’s face.