Scotland will host two Summer Test fixtures against USA and Spain at DAM Health Stadium in Edinburgh, ahead of traveling to New Zealand for the Rugby World Cup, in what will be their first appearance at the tournament in 12 years.

The Summer Tests are your opportunity to watch the team in action at home and send them off to New Zealand in style!

Scotland return to DAM Health Stadium to face USA in their first Summer Test of 2022 on Saturday 27 August (kick-off 4pm). 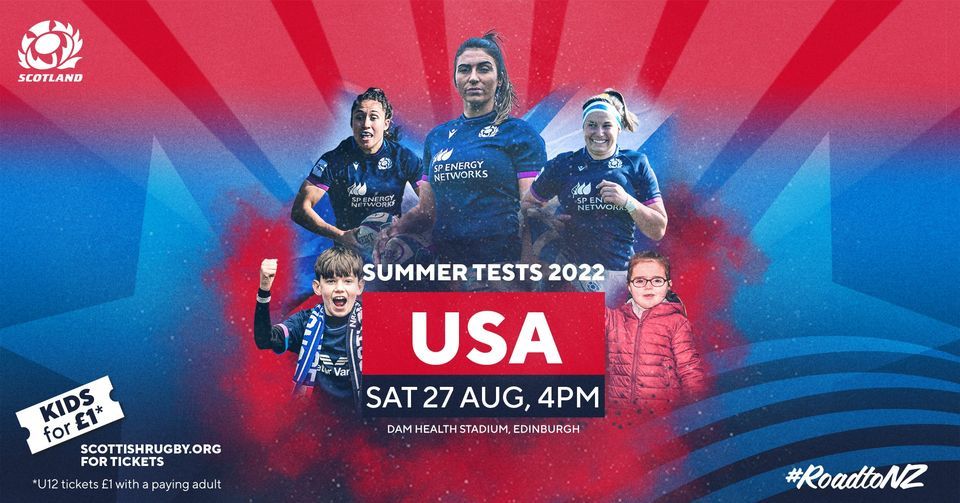 SCOTLAND have agreed warm-up games against the United States and Spain ahead of this autumn’s Rugby World Cup in New Zealand. Bryan Easson’s team will play the USA on Saturday 27 August then meet Spain on Sunday 11 September, with both matches taking place at Edinburgh’s DAM Health Stadium.

“To host two quality sides such as USA and Spain as part of our summer Test campaign will provide a fantastic opportunity for our squad to develop and grow ahead of the Rugby World Cup in New Zealand,” head coach Easson said. “We thoroughly enjoyed playing in front of a record home crowd against England at DAM Health Stadium in April so hopefully we will have another great crowd to send-off the team to New Zealand at the two matches.”

The USA are currently ranked fifth in the world while Spain are tenth – one place above Scotland. The Spanish are familiar opponents, having lost to Scotland in last year’s European qualifying tournament for the World Cup, but this will be a first meeting with the USA since 2006.

Scotland are in Pool A at the World Cup alongside Wales, Australia and hosts New Zealand. Their first match is against the Welsh on Sunday 9 October.

The USA are in Pool B with Canada, Italy and Japan, while Pool C consists of England, France, South Africa and Fiji. Spain failed to qualify. The top two in each pool plus the two best third-placed sides will go through to the quarter-finals.

The news of the fixtures comes on the same day as an announcement by the Scottish Government that they have allocated £144,352 to help the national team with costs in the build-up to the World Cup and to promote the women’s and girls’ game across the country. “This is a fantastic opportunity for the players to compete at the highest level and to showcase elite women’s sport,” said Maree Todd, the minister for public health, women’s health and sport.

“I am immensely proud of what the team have achieved so far and am delighted that we are able to support them financially to represent Scotland at the top level. The players have made huge commitments and sacrifices and I look forward to watching and supporting them later this year.”