Watch the 2022 French Barbarians vs USA Eagles broadcast on FloRugby

The French Barbarians vs USA Eagles will be streaming live on FloRugby. Home to the Houston SaberCats of Major League Rugby, Aveva Stadium is expected to see a near sold out crowd with friends, family and fans for a unique battle of two hard-hitting teams.

Gary Gold’s squad will first take on the renowned French Barbarians under the lights of Aveva Stadium on Friday, July 1 at 7:30PM Central Time.

As the USA men’s 15s team looks ahead to Friday’s intriguing meeting with the French Barbarians, we all know that the main job is the World CUp qualifier games with Chile right after.

Here’s how to watch the 2022 French Barbarians vs. USA Eagles broadcast on FloRugby.

Stream or cast from your desktop, mobile or TV. Now available on Roku, Fire TV, Chromecast and Apple TV.

Don’t forget to download the FloSports app on iOS or Android! If you can’t watch live, catch up with the replays! 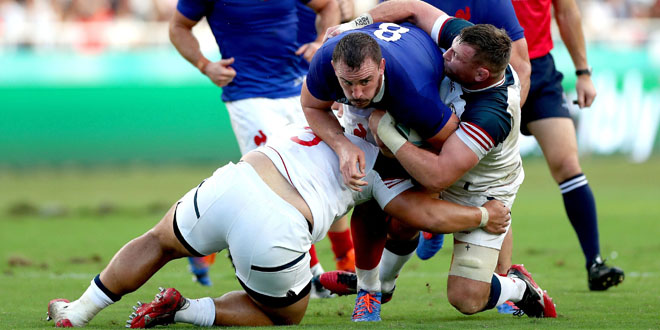 Video footage from the event will be archived and stored in a video library for FloRugby subscribers to watch for the duration of their subscription.

So this game is a warmup, which is kind of a weird word to use for a game against a team of seasoned veterans sprinkled with some young players itching to prove they belong on the French national team.

The 23 players listed for the USA match include six players capped by France, and one more capped 10 times by Portugal (that’d be scrumhalf Samuel Marqués). Some notice has been paid to the presence of well-known France veterans Louis Picamole (flanker) and François Trinh-Duc (flyhalf), but they are really not the story. Those two, along with Marqués might best serve as lock-room glue. The bones of the team come from the 17 uncapped players on the squad. Of those seven are over 30. They are longtime professionals who know their business and understand how to play professional rugby.

That is an excellent test for the USA team. Prop Arthur Joly, for example, is 34, and has played 124 Top 14 and European Cup games, as well as 67 games in Pro D2 (his club, Agen, was bouncing between the two during his five years there). He’s a powerful tighthead with enormous experience and knowledge.

Romain Sazy is 35 years old, 6-6, and has played 210 times for La Rochelle in with Top 14 and European Cup competitions (plus 31 games in Pro D2). Again, this is a player who knows how to win rugby games, play defense, be difficult, and secure possession.

Center Pierre Aguillon has logged over 10,000 minutes playing in the Top 14 and European Cup playing for La Rochelle, Castres, and Oyonnax. There’s very little in rugby he hasn’t seen before.