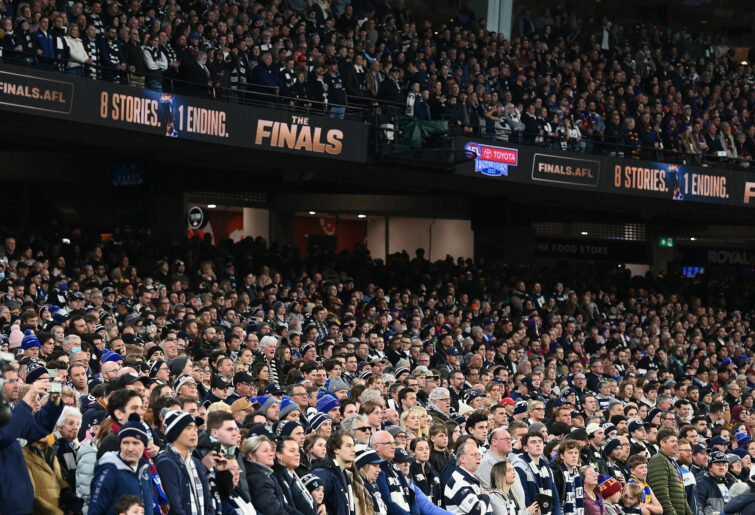 With the BCW 2022 Ranking of Sports Cities using a questionable methodology that ranks Tokyo and Paris number one and two by including mainstream and social media citations, I argue that London, New York City (NY) and Los Angeles (LA) are the greatest sporting cities.

They are ahead of Melbourne, which also ranks high on the world stage for a number of reasons.

While Australian rules football is a domestic sport with very little viewing interest overseas, Melbourne hosts nine Australian Football League (AFL) teams with the average home match crowd for the Melbourne Cricket Ground (MCG) and Docklands being 49,894 (46 matches) and 27,313 (43 matches) respectively during the 2022 home and away season.

During the 2022 AFL finals, when we count the 100,000 due to attend the grand final this Saturday, the MCG will have hosted six finals matches with an average crowd of 83,000.

While Melbourne is advantaged by having the MCG and Docklands stadiums with capacities of 100,000 and 56,000, there are very few cities in the world that can say they have five football teams (any code) that average around 40,000 or higher for home games as was the case in 2022, with eight of the nine Melbourne AFL clubs around 25,000 or higher.

The same rectangle stadium is also used by Melbourne A-League soccer clubs, albeit they only averaged 7,816 (37 matches) during the 2021-22 season after Melbourne Victory had averaged 20,600 for its 14 home game games during the 2018-19 season.

However, with many Melbournians amongst Optus Sport’s 868,000 active subscribers which streams England’s Premier League, including a then record 280,000 viewing Everton’s draw with Liverpool on 18 October 2021, Melbourne’s ability to attract big crowds for international soccer matches was again reflected by 76,500 attending the Manchester United versus Crystal Palace match at the MCG on 19 July 2022.

Melbournians will turn up to watch any high standard football code match, as further indicated by a near capacity crowd of 53,000 at Dockland for the Wallabies versus All Blacks rugby union international on 15 September 2022.

The MCG also gets large crowds for a few big international cricket matches each Summer, notably the first few days of the Boxing day Test with 88,000 and 80,000 attending day 1 in 2017 and 2019 against England and New Zealand.

With regard to one day internationals, the MCG attracted crowds above 53,000 for the 2018 and 2019 matches against England and India.

At the Women’s 2020 Twenty20 World Cup final, 86,174 fans turned up to the MCG to watch Australia beat India and win their fifth title.

The Australian Open tennis tournament is also the best attended of the four grand slams with a record 812,174 attending in 2020 over two weeks.

And Melbourne, in line with an average Australian ESPN television audience of 130,000 for the 2020-21 National Basketball Association (NBA) finals, showed it support of American basketball in 2019 when Australia played the USA twice at Docklands twice before massive crowds of 52,079 and 51,218.

Melbourne also has the formula one Grand Prix near the city at Albert Park which attracted 420,000 in 2022 over the four-day weekend.

The Spring horse racing carnival, with four meetings over eight days, also regularly crowds of around 100,000 for the two big days of the carnival (Derby Day and the Melbourne Cup).

Fans look on during the 2022 preliminary final between Geelong and Brisbane. (Photo by Quinn Rooney/Getty Images)

But Melbourne’s love of many sports is surpassed by London, NY and LA.

Similar London crowds also attend the FA and League Cup knockout matches, as well as for the European Champions Cup and Europa League when the top London teams qualify (Tottenham, Chelsea and Arsenal for the 2022-23 season).

The big London clubs enhance the incredible appeal of England’s Premier League with an estimated 3.2 billion viewers watching its matches during the 2019-20 season via 878 million homes world-wide, while bringing in 528,000 tourists and contributing £7.6 billion to the UK economy, despite the impact of Covid.

With regard to rugby union, while Harlequins is the only London club that averaged above 10,000 for its 12 home games in the 2021-22 Premiership with 12,173, London’s Twickenham stadium (82,000 capacity) hosts many crowds above 70,000 each year for its premiership final and the many international against the leading European and southern hemisphere nations.

Jurgen Klopp of Liverpool celebrates with the FA Cup during The FA Cup Final match between Chelsea and Liverpool at Wembley Stadium on May 14, 2022 in London, England. (Photo by Michael Regan – The FA/The FA via Getty Images)

From November 2021 to March 2022, England played at Twickenham before crowds of 81,000 or more against Wales, Ireland, Samoa and Australia.

London also hosts NFL games with three games scheduled for the Tottenham (2) and Wembley (1) stadiums in 2022.

Outside London, there are very few cities around the world that currently have five modern football stadiums with a 60,000 to 80,000 capacity.

In terms of cricket, England’s number one Summer sport in terms of spectators and a sport with significant global interest, London has two of the most famous cricket venues in the world through Lords and the Oval with both having a capacity of around 28,000.

While the capacity of English cricket stadiums is small by Indian and Australian standards, London’s hosting of the big national cricket teams is always a highlight of world cricket.

Wimbledon, the most prestigious of all world tennis tournaments, is also well attended with a record 515,164 turning up in 2022 for the fortnight event.

London’s capacity to host huge global events has also been recently indicated by the 2012 Olympic games and 2017 World Championships (WC) for athletics where near capacity crowds attended most sessions.

At the 2017 WC and World Para Athletics championships held at the London Olympic Stadium, England’s love of sport was again reflected by 705,000 and 305,000 tickets being sold to the two different events, thus leading the London Mayor (Sadiq Khan) to state that London “is, without question, the sporting capital of the world”.

And, though Ascot requires a 51 minute train ride to cover the 40km distance from London, the Royal Ascot Carnival is the jewel in the crown of English horse racing which attracts around 300,000 people over five days to witness the eight Group One races.

But if we are to go on annual domestic crowd numbers for a number of different sporting leagues, NY and LA are the biggest global sporting cities.

With regard to the National Football League (NFL), which runs from September to January and also attracts substantial international interest that includes around 390,000 Australians watching the Super Bowl in recent years, NY has the Giants and Jets who averaged 73,882 (8 matches) and 71,676 (9 matches) in 2021 at the nearby New Jersey stadium (82,500 capacity).

Of Major League Soccer (MLS), the NY Red Bulls and NY City have both averaged around 16,500 thus far during the 2022 season for their home games.

NY also hosts the US Open for tennis, one of the grand slam events, with the 2022 competition attracting a record 776,120 fans for the two-week tournament with every session in the 23,859 capacity Arthur Ashe Stadium sold out for the first time after opening 25 years ago.

LA has two NFL teams, after the Rams and Chargers returned from other US cities in recent years, with average crowds at their shared stadium being 71,598 (8 matches) and 70,240 (9 matches) during the 2021 season.

Unlike NY which does not have a major college football team, LA has the USC Trojans and UCLA Bruins who play at the Coliseum and the Rose Bowl with current capacities of 77,500 and 88,500.

While college football crowds have dropped in recent years after covid, with some pointing to higher seat prices being a factor, the five year average crowd prior to 2020 was 66,261 for USC and 57,074 for UCLA for their home games, albeit well behind 14 US college football teams which averaged above 80,000 for home games in 2019 including six above 100,000.

To conclude, we live in a world of many great sporting cities, including Melbourne, but I would argue that the data shows that London, NY and LA are the world’s greatest sporting cities given their longstanding love of many sports.
What do you think?