The World Cup done and dusted, summing up the Aussie sevens season 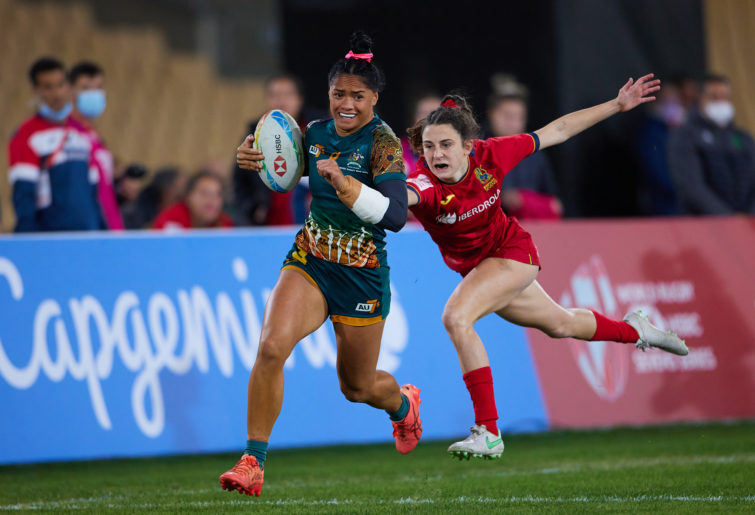 The rugby sevens season has finished, what a year it has been, with World Sevens Series titles, Commonwealth Games and a World Cup.

The World Cup for the Aussie teams was very much like the Commonwealth Games: bittersweet.

The men again missed out on a bronze medal, going down to Ireland, while the shining aura of the women’s team continues as they were crowned champions.

The World Cup is a high pressure, brutal format, straight knock-out, thanks for coming. On days one and two they played just one game. In many ways it was as much a mental challenge to keep focused as a physical one.

Women sevens
The women have had an undeniably great year – taking out the World Sevens Series title and Commonwealth Games gold. The players and coach Tim Walsh were up front and open they were aiming for the Triple Crown to also take out the World Cup. No team has taken all three in the one year.


The World Cup done and dusted, summing up the Aussie sevens season


The Wrap: How the Rebels are trying to bridge the chasm between club and Super rugby

While the women were rusty to start against Madagascar, they soon got into their groove, able to play a free-flowing, try-scoring game, or get into the grind against the USA in the semi-final and also in the final against New Zealand.

When it came to the final, the teams matched up well, so a couple of moments can make the difference.

For example, Sharni Williams kicked a conversion near the touch line, Australia only won by two points. Or Niall Williams received a yellow card for throwing the ball away, the commentator saying it was a “massive mistake”, and Australia scored twice with her off the field.

The squad has some real superstars such as Charlotte Caslick, Maddison Levi and Faith Nathan, who are a bit like the strikers up front in football, setting up and scoring the tries – Nathan scored five in the first game and Levi scored three in the final.

Australia does not beat New Zealand without Alysia Lefau-Fakaosilea. She draws two tacklers every time she has the ball, provides an offload and is a powerhouse in defence. It is no coincidence that Australia lost to the Kiwis in the Toulouse final, which was the one tournament Lefau-Fakaosilea did not play.

The evergreen Williams is in many ways the spiritual heart of this squad, also taking out player of the final.

The two players who have developed the most this season, Teagan Levi and Sariah Paki, have both become important members of the team. Paki is a starter, plays long minutes and does a lot of the tough things in defence but at the same time can pass and set up plays. Levi comes off the bench and is seriously the full package. At 18 years old she has the confidence of youth, can grubber kick in general play, can hit in a tackle, has speed, can pass and has footy smarts.

A final comment on the women, which probably is not recognised in the media as it should be, these players are supreme athletes. They are not just unbelievably fit, fast and skilled. A real take out of this year and the World Cup is that these players are really, really tough. None of the players shirk from diving head-first into a ruck or making a tackle.

All of that shows real strength in character and attitude. So one can imagine their bodies have taken a bit of a beating over the last 12 months.

The women now have a couple of months off and get back into it in early December in Dubai.

The men’s team at the World Cup did what they do: worked hard, made their tackles and took their opportunities. They are never going to shoot the lights out like South Africa or Fiji can. They are a quality team but without many superstars.

They kicked off with an easy win over Uruguay then got over a feisty and competitive France in a gritty game where coach John Manenti used his substitutions well. Unfortunately, they then ran into the eventual champions, Fiji, in the semi-final.

The Fijians got away early with a couple of quick tries, Australia got back in striking range but an intercept pass right on halftime and a questionable yellow card meant the mountain was too high to climb.

Just like the Commonwealth Games, the Aussies went into the bronze medal play off, this time going down to Ireland in a tight match. While they came in fourth it should be noted the hosts and Commonwealth Games gold medalists South Africa did not make it into the semis.

While the Commonwealth Games and World Cup did not go their way, the men did take out the World Rugby Sevens Series, which is an impressive achievement. So the men got more than a pass mark for the year.

Now they have a break until the World Sevens Series kicks off again in November in Hong Kong.

Why Sharni Williams deserves a place in World and Australian Rugby Halls of Fame
Tweak the bench: Learn to love fatigue again and the game will be better off
Go to mobile version