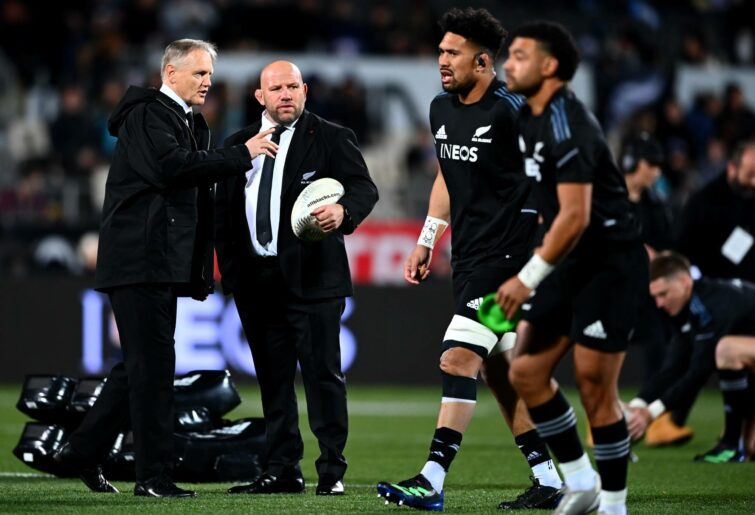 The new All Blacks coaching line-up has analysts, pundits and journalists alike looking for the alterations/improvements to attributed to either Jason Ryan or Joe Schmidt.

No doubt there are improvements in structure of the eight that will lie firmly at the feet of the man from the Crusaders.

For mine Joe Schmidt’s input, while present, is still being diluted by what had come before. The ball retention, more bodies in motion and moving the point of attack, while welcomed, is still stymied by poor selections and a mind-set that lacks patience.

Last year I suggested a selection law, astonishingly overlooked by the All Black coaching team, that one should never select two of Akira Ioane, Hoskins Sotutu or Ardie Savea in the same loose forward trio.

Always playing too wide, leaving the hard years to Sam Cane or whoever was stuck at openside, and the remaining tight five forwards, the All Black ruck defence was decimated again and again before the big plug of Shannon Frizell was finally sensibly selected and the formation narrowed.

I now have an addition to this list in Dalton Papalii, while removing Ardie Savea now that the 1-3-3-1 nonsense has been abandoned when tandem with the Sam Cane/Frizell combo.


‘He has to earn it’: Aus A selection gives struggling Suli a shot at proving World Cup worth to Rennie

And Saturday’s loose forward selection, limited by the squad selected and somewhat forced by injury and baby duty, had the Foster DNA all over it again.

Sotutu from the start, Akira Ioane and Dalton Papalii on the pine, more based in hope than anything, that the wide running we saw in the Australian match last year would magically reappear. With Captain Canes early departure all the loose forward horror stories from 2021 and early 2022 came flooding back.

Think about it this way, If Mathieu Raynal hadn’t made the big call at the end, where would the public be looking for answers, the loose forwards (post Cane) and the poor defending in that backline would be the primary targets for both selection and game plan criticism.

Is it just me, or is the evidence of a tighter more direct approach coming out loud and clear from this All Black team?

Every time they deviate, as the they second half of the loss to Argentina and later in the second half in Melbourne, it goes to cactus quickly.

Until we start seeing some squad and match day 23 selections that reflect this new All Black way, players are going to revert to their Foster-ingrained prior bad habits in exactly the same way a new golf swing crumbles when there is a crowd watching you off the first tee or you need to get up and down on 18 to win lunch and beers

I have no idea what has happened to Dalton Papali’i. The trojan of last season where he got through a huge tackle count with the occasional contribution with ball in hand on the edge has been reduced to bystander.

His start against Ireland, two recent short bench appearances, or this longer one after Canes injury, he looks incapables of not only finding the rhythm of a match, but of making any impact at all.

His international form is now putting his potential selection for the EOYT at risk. If Sam Cane goes down again and we are looking for a like for like replacement I would suggest the selectors have a good hard look about the inclusion of Tom Christie and/or Adrian Choat to the wider squad who are both head down, bum up individuals unconcerned with the highlight reel.

We have heard Coach Foster repeatedly blame New Zealand rugby DNA for these outcomes, but can we not trace back this alleged DNA firmly to the end of the Hansen and beginning of the Foster administration.

This is not going to magically disappear just because Ryan and Schmidt are wandering the corridors and the training pitches. This is now four seasons into an ideology imposed on a team that has to be reversed and there are now fewer than 10 tests to fix it.

So, I am invoking a new selection law for the back-line to be implemented in line with my loose forward dictate.

They cannot select more than two of Caleb Clarke, Will Jordan and Rieko Ioane in any All Black side. Best ensure includes the full 23 man selection so we do not end up with the three of them out there together.

None of them are what one can call complete defenders in their position. Clarke has been poor for most of the year but exceeded even those levels with getting himself into poor positions in Melbourne while Will Jordan has far too many one-on-one misses to be helpful.

I had held some hope for Rieko Ioane’s defence at centre over recent weeks as he made four head on tackles by my count (always a good sign for a centre) and the over committing which had become ingrained in his game appeared to have somewhat dissipated.

But let’s face it, he is never going to be the defensive rock or organiser that international rugby union requires in this position and thus further pressure is placed on his teammates to rectify far too many situations.

A quick look at the poor miss by Will Jordan on Pete Samu will show the defensive ball watching work being done by both Ioane brothers on the inside prior to Jordan getting skinned on the touchline by the flanker. (Can’t believe I just wrote that).

For those who cling to the belief that Rieko will make it as a centre rather than the world class left wing, need look no further than his supporting run on a big left Caleb Clarke breakout in Melbourne.

With one defender remaining both Clarke and Ioane run for the same space, make a complete mess of it and a certain try disappeared – a winger’s instincts the core.

The lack of awareness with Australia down to 13 men and messing up a three on one with a horrendous pass to Beauden Barret further imbed the point, the mans a natural winger, and one who should be scaring opposition from that flack for years to come.

This is classic, repeated, Foster DNA: select for attacking options at all cost, believe you can outscore all comers and leave poor old Scott MacLeod to try and make a secure defensive wall out of porous building materials.

His recent statement that this is ball in hand fall back is New Zealand rugby DNA was disingenuous, simply misleading, but even worse for mine, he took no ownership for the game plan and methods he has been driving into this side since before the ill-fated semi-final loss at the RWC in 2019.

The Foster ethos allows opposition coaches too many places to attack the All Blacks. A hefty loose forward trio and a first-five eighth who hadn’t played a single match since May engineered a comeback from 18 points down against a New Zealand side who thought the job was down, cue was in the rack and it was time to throw a few passes.

Not good enough and way too easy for the opposition (as good as they were) to take advantage.

I took a peek at The Breakdown show last week, my own fault I know. But there was New Zealand rugby celebrity (can’t think of a better word polite word for him) John Kirwan waxing lyrical about how New Zealand should start Akira Ioane and Dalton Papalii against Australia because we can play wider and Sam Cane can simply be asked to play tighter.

The mindset that New Zealand can run when they like has clearly spread outside of the coaching box and needs to be hit on the head smartly.

Oh, and by the way JK, how did the attacking New Zealand loose forward approach work out for ya? Soft and bullied were words that sprung to mind for me as the weak centre of the park that has been remedied by Frizell, Cane and Savea from Johannesburg onwards, hoved predictably into view yet again. How many times do you need to be hit with a stick before you learn it hurts.

Driving out the Foster DNA needs to be done, not only via game plan and match day selections but also in squad selection and that cannot be done in full until year end when they need to be ruthless on those who have been selected to follow the previous mantra need to be struck off.

For the coming match at Eden Park there is little option in the midfield due to injuries. Both David Havili and Quinn Tupaea won’t be there, which means leaving Rieko at 13 and Jordie Barrett at 12.

Which means for the Highlander backline formula to be followed one of Caleb Clarke or Will Jordan is wearing a suit this weekend. For mine it’s Clarke. While looking all powerful ball in hand , its like watching a fly in a bottle. Unware of anything going on around him, all noise, all action, little positive outcome.

Will Jordan simply has not done enough yet to be trusted at fullback so in comes Beauden Barrett in the 15 shirt , Stephen Perofeta gets a chance on the pine and either Sevu Reece or Leicester Fainga’anuku gets the left wing selection.

Probably LF given the rate at which the All Black midfielders are falling. Luke Jacobson gets the loose forward bench spot for me as I am hearing all of the first choice loosies are available for selection again this week.

That should get them through this week, but the major surgery, the real message that this side turned a corner and is leaving the ‘Foster Game Plan A’ firmly in the receptables provided, will come when they select the end of year tour squad and some serious statements need to be made.

That should make for an entertaining last article of this part of the season in a week or two.

‘He has to earn it’: Aus A selection gives struggling Suli a shot at proving World Cup worth to Rennie
The Thursday Two-up: How does The Rugby Championship end from here?
Go to mobile version