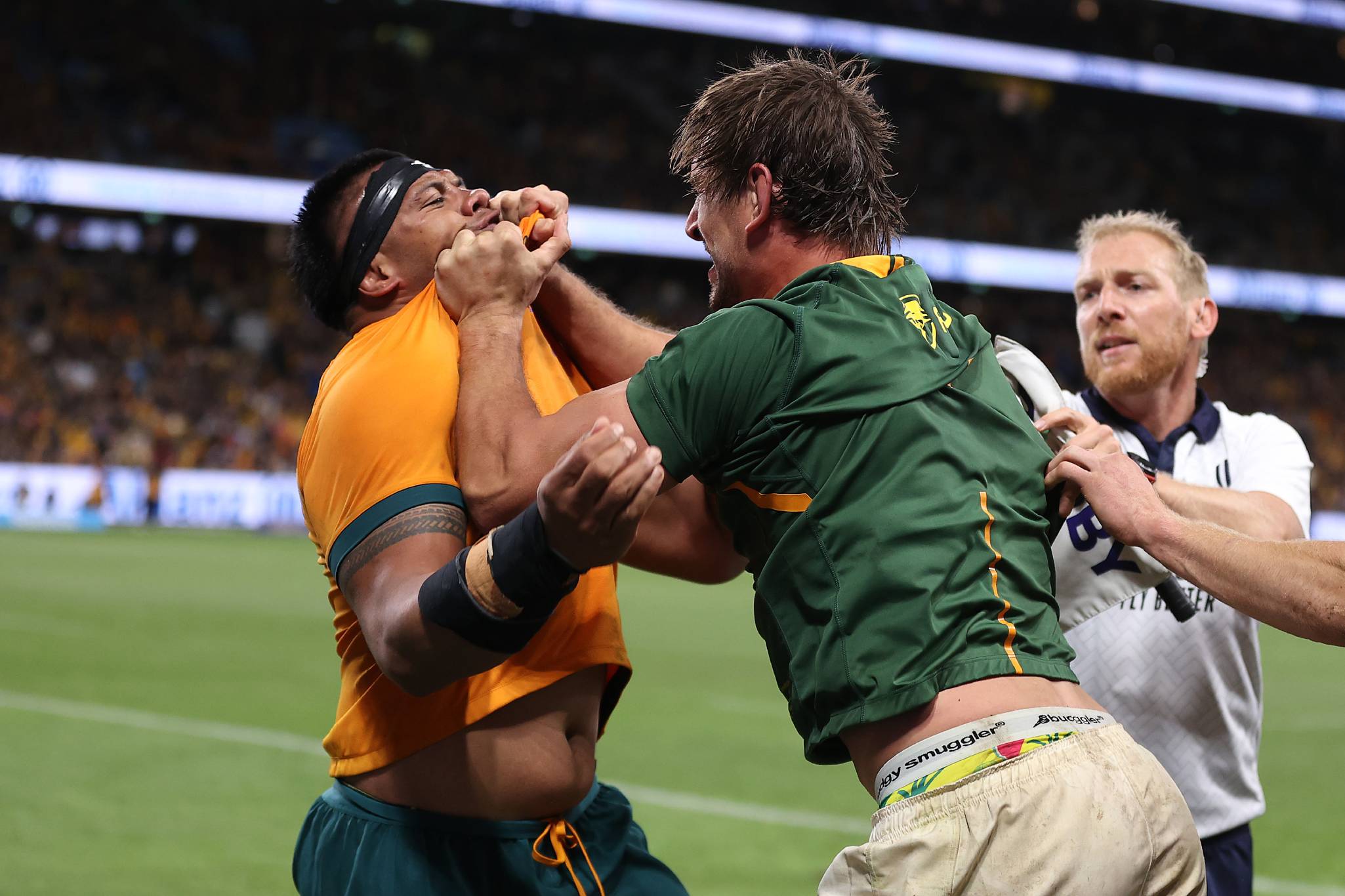 From the fercocious celebrations of their opening try to the eye-bulging fury of Eben Etzebeth tangling with Allan Alaalatoa at the end, the Springboks tore into Australia with unrelenting intensity on Saturday night.

While their fans had been vocal in their objection to two big moments in the loss in Adelaide, the players quietly stewed, then brought next level pay back vibes to the grass of the Sydney Football Stadium.

“If Nic White hogged the social media airwaves after last week’s match between the Boks and the Wallabies, this time it is Eben Etzebeth’s face of fury that is sending tremors around the rugby world,” wrote Mike Greenaway on the IOL website.

“And we can safely say that the two incidents are related because it was a very angry Springbok team that took the field in Sydney after perceived injustices in Adelaide and White foolishly fed the frenzy with persistent chirping of the South Africans as the tensions rose ever higher.

“Early in the game, White has a bloody mouth and is heard complaining to the referee that he has been punched.

“And the fuse was lit on the powder keg 10 minutes from time when Makazole Mapimpi scored in the corner despite the best attentions of his foe from last week, Marika Koroibete, and as the Bok wing rose triumphantly from the tryline, he gently laid a hand on Koroibete’s chin and gave him some verbal.

“At last, an angry Springbok team! And wasn’t it a thing of beauty as the Wallabies got walloped off the park in front of their sold-out audience although there were enough ex-pat South Africans present for there to be a resounding boo each time White touched the ball.”

The Roar experts Brett McKay, Harry Jones and Jim Tucker give their verdicts on the latest round of TRC in the Instant Reaction podcast

It’s no secret that the Boks players were riled by the endless replays of Koroibete’s try saver in Adelaide – which they felt should have been referred to the TMO – and White’s antics when he dived after a slap from Faf De Klerk.

In fact, the Springboks felt Dave Rennie should have disciplined White where the referee failed to, by standing him down, from the starting XV if not the 23, on Saturday.

After the game in Adelaide, and again on Thursday, The Roar asked Rennie to give his view on White. In place of an admonishment that might have in some small way appeased the Boks, Rennie chose to shrug it off and decide the question was negative.

White, wrote Greenaway, “did not learn his lesson from the previous week when his histrionics lost him the respect of the rest of the rugby world because his incessant chirping at the Boks kept stoking the red hot coals which burst into incandescent fire 10 minutes from time when the Makazola Mapimpi try sparked a riot.

“Interestingly, the great Welsh referee Nigel Owens said on Friday that he would have yellow-carded Nic White for his playacting in Adelaide. The resulting sin-binning of Faf de Klerk was hardly the only reason the Boks lost that game but it sure helped fire them up a week later. Lip readers would have blushed at the Bok verbals flying at White… Maybe the Boks should put a picture of the Brumbies scrumhalf up in the change room each game because they have an irritating inability to regularly play at a high intensity.”

The Boks’ anger spewed from every pore – there were suggestions they felt some of the verbal exchanges in Adelaide crossed the line – and they appeared to target the Wallabies – including Noah Lolesio and Hunter Paisami.

While the Boks’ media revelled in the victory, there was also a caveat.

“They seem to be only able to perform well when their backs are against the wall and this has now become a hackneyed rugby cliché — the Boks disappoint in the game when they have been favourites and then after a sequence of losses they dig deep and rebound with a vengeance.

“Indeed, this Aussie side should have had 30 put past them by half time such was the utter South African dominance but I guess I shouldn’t be too much of a party pooper because at last the green and gold drought in the Great Outback is over.

“So let’s savour this 24-8 win, the first in Australia since 2013 and the first in Sydney since 1993 and let’s pray that [Jacques] Nienaber and Co now consolidate this side, especially the pack, and they go to Argentina in a fortnight’s time and win there to set up a probable opportunity to win the Rugby Championship when they complete their campaign in Durban.

“The Boks can certainly do it. They just need to bottle that anger and intensity because when they are annoyed, they can beat anybody anywhere.”

Nienaber made eight changes to the team beaten in Adelaide and got the response his cutthroat call demanded.

Canan Moodie got a try on on debut, and Damian Willemse was named man of the match, although how it wasn’t given to Siya Kolisi is anyone’s guess.

“It’s the first time in 9 years that we’ve won here. From our side, it’s obviously just a great result to win in Australia again,” Nienaber said afterwards.

Canan Moodie of the Springboks makes a break to score a try. (Photo by Matt King/Getty Images)

“Interestingly, as a core group we’ve played here 5 times and we’ve only our first now. The record here has been poor. I’m happy we could change that because 20% still looks better than 0%.

“I’m also really happy for the players, particularly the guys who were given opportunities in this game because they definitely took them.”

Nienaber applauded his team’s reaction to the Adelaide loss.

“We put a lot of internal pressure on ourselves in trying to get things right. I’ve mentioned in the past that we’re quite transparent with the players so they know what the plan is,” he said.

“We’ve used 32 players in the last four games and with that comes a bit of risk. We needed some answers and the players gave us some.

“It’s not like the players weren’t up for it last week, we just ensured that the opportunities we created were capitalised on. Our preparation was good this week, this performance was definitely a step up.

“We weren’t happy with the intensity of the start last week, particularly in the first 20-25 minutes, and I thought that was a big step up today.”

Craig Lewis, writing in the South African, said the Boks will fancy their chances of winning the trophy. The All Blacks are on 10 points with the other three teams all on nine.

“Australia will host New Zealand in Melbourne before travelling to Eden Park for a rematch, and it really wouldn’t be all that surprising to see these games being very closely contested.

Ultimately there is everything to play for in the final two rounds of Rugby Championship fixtures, but after the Boks fell to the bottom of the log last weekend, they will suddenly be feeling a lot more optimistic about their chances,” Lewis wrote.

Wynona Louw, writing on IOL, said the Boks’ “finishing was again an issue with execution and patience lacking on attack in the first half and, given the shots they had, the 12-3 margin at half time could have been bigger.

“This weekend, however, there was a huge step-up, and the character and determination the Boks showed in the second half was immense.”

She highlighted the try by Moodie, who leapt above Koroibete and ran away untouched.

“Of all the good there was in that first half, the highlight was undoubtedly Bulls wing Canan Moodie’s try,” she wrote.

“The youngster — who became the second youngest Springbok debutant after veteran Frans Steyn since readmission — made his international bow one to remember.

“Not only was he constantly looking for work, but he scored the visitors’ second try on the stroke of half time in stunning fashion as he showed superb awareness, aerial skills and timing to gather scrumhalf Jaden Hendrikse’s kick from his own territory to speed to the whitewash.”

She was also full of praise for flyhalf Willemse.

“The Stormers number 10 was absolutely outstanding as he owned the role (after also impressing at 15 and 12, by the way) and, bar the two tough kicks he hooked, there was next to nothing to fault in his game.”

Zelim Nel, writing in SA Rugby Magazine, said the Boks showed they are genuine contenders to defend their World Cup next year if they can maintain the intensity.

“After South Africa’s dismal showing in Adelaide, I warned that the world champions were at a crossroads and, though I expected them to win in Sydney, it would not hide their stagnation,” he wrote.

“I stand by what I wrote – the momentum gained from a riveting, all-action performance against the Wallabies to bank a first win in Australia since 2013 will vanish if South Africa doesn’t back it up against Argentina in Buenos Aires in a fortnight.

“But the Bok response to a dire loss in Adelaide was unequivocal confirmation that the current group has the capacity and the know-how to go back to back at the 2023 Rugby World Cup.

“Kolisi and [Willie] Le Roux were magnificent, the veteran fullback crucial to taming the colts in a fresh backline that was long on ability but short on experience, while the Bok skipper tapped into an imperious vein of form to produce some of his finest work as a hard-charging ball-carrier and breakdown threat.”

‘I want the boys to hurt’: Everything Slipper and Rennie said about Boks ‘choke’, Beale, Foley prospects
AUS vs SA studs and duds: Coach or cattle behind Wallabies’ troubling ‘psyche’ flaw, and what’s up with Giteau Law pick?
Go to mobile version