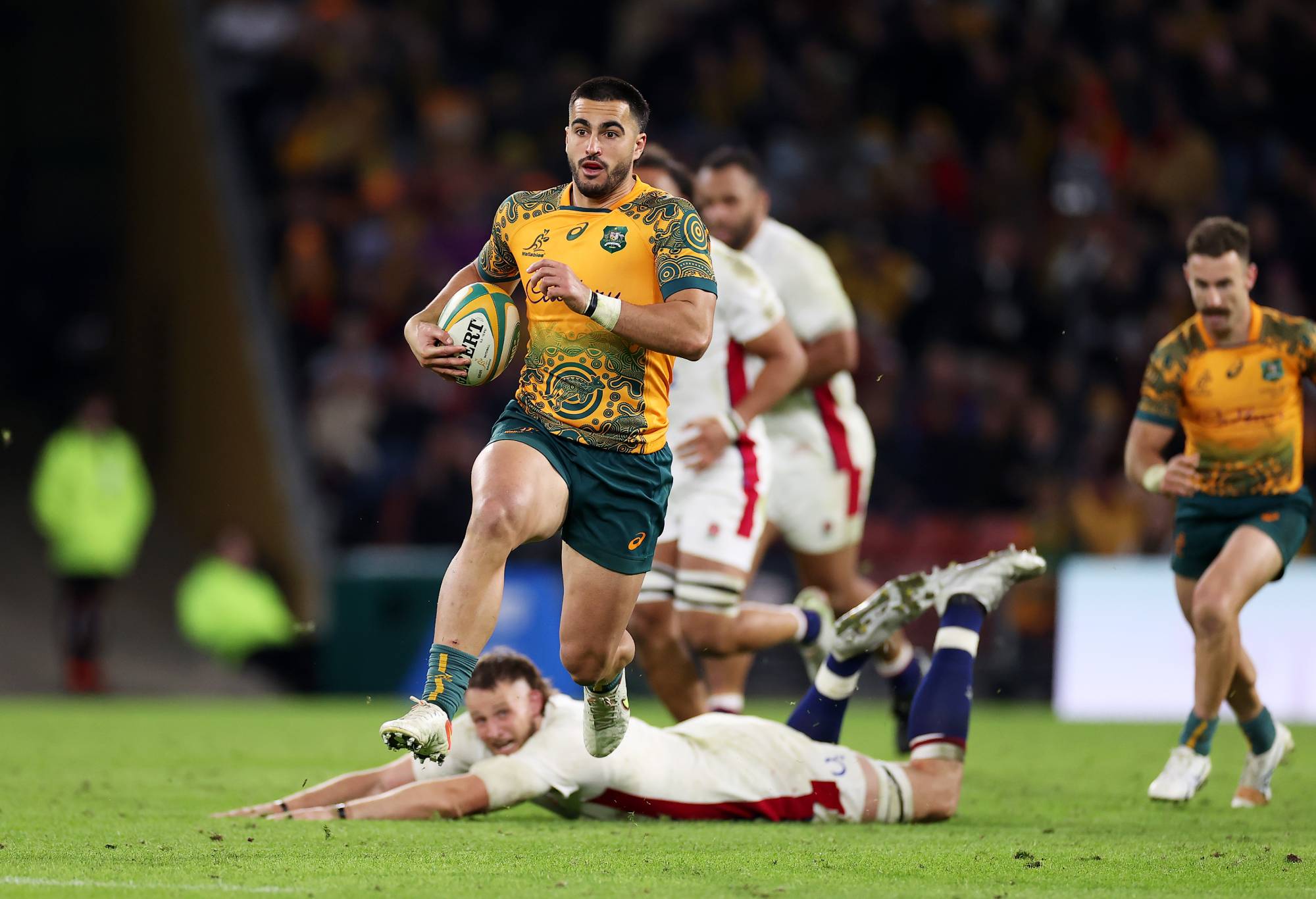 Wallabies back Tom Wright admits the team failed to execute their plans in the series loss to England and revealed the key focus area ahead of the Rugby Championship.

The Wallabies were chastened by the 2-1 defeat against Eddie Jones’ tourists, having overcome the loss of Darcy Swain to win in Perth in the opener.

Wright, who spent time at fullback after the losses of Tom Banks, Andrew Kellaway and Jordie Petaia through the series, said the Wallabies backs were disappointed they weren’t able to honour the game plan in the second and third Tests.

“Obviously we want it to be a whole lot better in certain areas of our game,” Wright told reporters on Tuesday.

“We had a plan to do a few specific things game-plan wise and we weren’t able to execute and that was a little bit disappointing.

“We sort of died wondering, would that have worked or not?”

Wright said the team reviewed the issues and thrashed them out in a “few harsh conversations with one another and the staff,” adding, “being able to put that to bed before we flew over was pleasing.”

Wright said the “overarching theme” has been discussion around the Wallabies’ “effort area in and around counter”.

“Counter can be not so much individualised, but you can work hard and create opportunities for your teammates off the ball if you just put your head down initially and work hard for the first five or 10 steps,” said Wright.

“You might draw a body or create some space for your teammate just through a little bit of effort, looking after the guys inside and outside.”

Petaia is back to fitness for the start of the Rugby Championship and likely to return to No.15 with Wright on the wing. The Brumbies flyer made it clear he enjoys the extra responsibility of fullback.

“If that opportunity arises again, I’ll definitely take it with both hands,” Wright said.

“I was given an opportunity there through someone else’s misfortune. It will be good to have Jordie back in the mix of selection, and we’re only going to be better off for it as a team, but fullback is something that excites me – you get a few different looks at getting the ball in different parts of the field.”

Wright was asked about the absence of South African and Argentina sides from Super Rugby and if that might leave the Aussies exposed in terms of not being ready for an increased level of physicality from those nations during TRC.

“The England series was reasonably physical. Seeing how many guys (got hurt) over three games there for both sides,” he countered.

He said a review of Argentina’s series win over Scotland showed they “didn’t do a whole lot of contestable kicking”.

“They use the ball and were able to sort of find opportunities that way. That will be something that probably plays into our hands too,” said Wright.


Target potential over stars: Suaalii a strong option but rugby can’t repeat past mistakes in hunt for NRL converts

“They play quite a frontline dominant, defensive style. So you’ll probably try to find yourself dropping it on the toe if you can, but the backs probably more so.

“They’ve got a fair bit of line speed and like to fill that frontline. It’s certainly not something that we thought was a good opportunity for us necessarily against England. But it’s definitely something that is in our toolbox at all times.”

The Aussies are expecting a passionate reception from home fans in Mendoza this weekend, and there have been issues in the past with visiting players being targeted by laser wielding supporters aiming to distract them.

“I’m thinking of playing in goggles just in case just to rule out any sort of foul play or whatever,” joked Wright. “Nah. If there’s a laser, there’s a laser. There’s not much I can do from the middle of the field.”

Pete Samu says he’ll probably never know why he was cut from the 2019 World Cup squad, and is just focussed on remaining a key part of Dave Rennie’s plans for next year.

Samu moved his family from New Zealand ahead of the Japan RWC only to miss out on Michael Cheika’s squad. With the Aussies ready to face their former coach, now at the helm of Argentina, Samu was asked to reflect on the experience of being left out three years ago.

“It’s all behind me now. I’m just grateful to be back in the mix and whatever happened in the past is in the past,” Samu said.

Rennie is a massive fan of Samu’s versatility and ability to play across all three back row positions.

(Photo by Will Russell/Getty Images)

“I’ll do whatever it takes to do my job to the best I can. I’m just grateful to be in the mix and whether that’s starting or on the bench  I just take it game by game,” Samu said.

Since 2019 he feels he has made advances around his set piece play.

“[Back then] I never really saw myself as being really good around the set piece side of things and I definitely feel that I’ve become a better player, just learning that side of the game a bit more when I’m used in a line out or scrum or whatever,” said Samu.

The Cheika association is occupying the minds of those tasked with generating previews of the series, but so not the players, said Wright.

Asked if Cheika was being discussed internally, Wright mocked the question: “Yeah, all the time, we’re always talking about it because you guys always remind us

“No. I certainly wasn’t here when (he was) in camp. I don’t necessarily know any of the backstories that you sort of mentioned there that you guys continually remind everyone of.

“If we’re too busy worrying about the opposition coach we’ve probably got our head in the wrong place.”

Latu call ‘on my head’

Waratahs coach Darren Coleman has taken responsibility for the Tolu Latu gamble but is adamant the controversial Wallabies hooker will make the most of his chance back in Sydney.

Latu, who was accused of having an on going drinking problem by his French club president ahead of his recent axing, has joined the Tahs on a one-year deal with a mind to make Australia’s World Cup squad.

The 29-year-old was fined and suspended for drink driving in Australia in 2019 and had a similar offence in France last year.

He also received seven yellow cards and two reds in three years at Stade Francais and represents a huge risk on the field at least in an era where authorities are cracking down hard on foul play.

But Coleman seems certain he can handle both on-field and off-field issues.

“I take people as I find them and the two experiences I had with [Latu] in NRC were really positive,” Coleman told the Sydney Morning Herald.

“I can’t hang a guy for something he hasn’t done while I am around. I would like to think we have some good influences here – and the team, culture-wise, is in a really positive space – and that he will get swept up in it.

“Further to that, everyone knows it could be his last shot and his last chance. So you’d think all those things combined, we will get a positive reaction out of him. I have had a bunch of chats with him, five or six, over the last bit of time, even as late as last night. And he is saying all the right things.

“He hasn’t broken my trust so he is starting with a clean slate with me and I am confident I can get him on the right track. Time will tell. If it doesn’t work out, it is on me and on my head. I am prepared for that.”

Coleman said Latu had moved back in with his mum and is “in a good place mentally.”

As for his dicipline, Coleman added: “He has always been a player who plays aggressively, and that’s good, but we have some really significant stuff in place, and some training stuff, around his tackling,” Coleman said.

“We know now with the head-contact stuff, he is on tenterhooks there. But Gilly [defence coach Jason Gilmore] and Pauli [Taumoepeau, forwards coach] will do a lot of work there in and around the contact aspects of his game. I will probably work more with him around the mental side of it.

“There are a million good redemption stories out there and I am hoping this will be one as well.”

Kiwi legend Portia Woodman was all class when asked about the controversial loss to Australia that cost New Zealand a chance of Commonwealth Games sevens gold.

Aussie star Maddison Levi received a yellow card in the semi final win over the Kiwis for pulling Woodman’s hair in a desperate attempt nto stop her from scoring.

Kiwi fans and media cried foul, claiming their team should have also been awarded a penalty try that would have given them a place in the final. Instead Australia advanced and knocked over Fiji to claim gold, while NZ ended with bronze.

Woodman, though, wasn’t buying into the trans Tasman controversy.

“It’s my fault for wearing my hair out, I’ve got to expect that. To be honest, if I was to put [the result] down to that, I probably shouldn’t be doing it anyway,” Woodman said.

Although downcast after the loss, Woodman revealed how the team had gotten their minds back on the job of leaving Birmingham with a medal.

“After we lost last night we sang our hearts out, sang all the depressing songs we could, so we could get it out [of the system].”

Target potential over stars: Suaalii a strong option but rugby can’t repeat past mistakes in hunt for NRL converts
‘We have to change the game’: Larkham reveals RA’s back room move to ‘tweak’ rugby, promises more exciting Brumbies
Go to mobile version