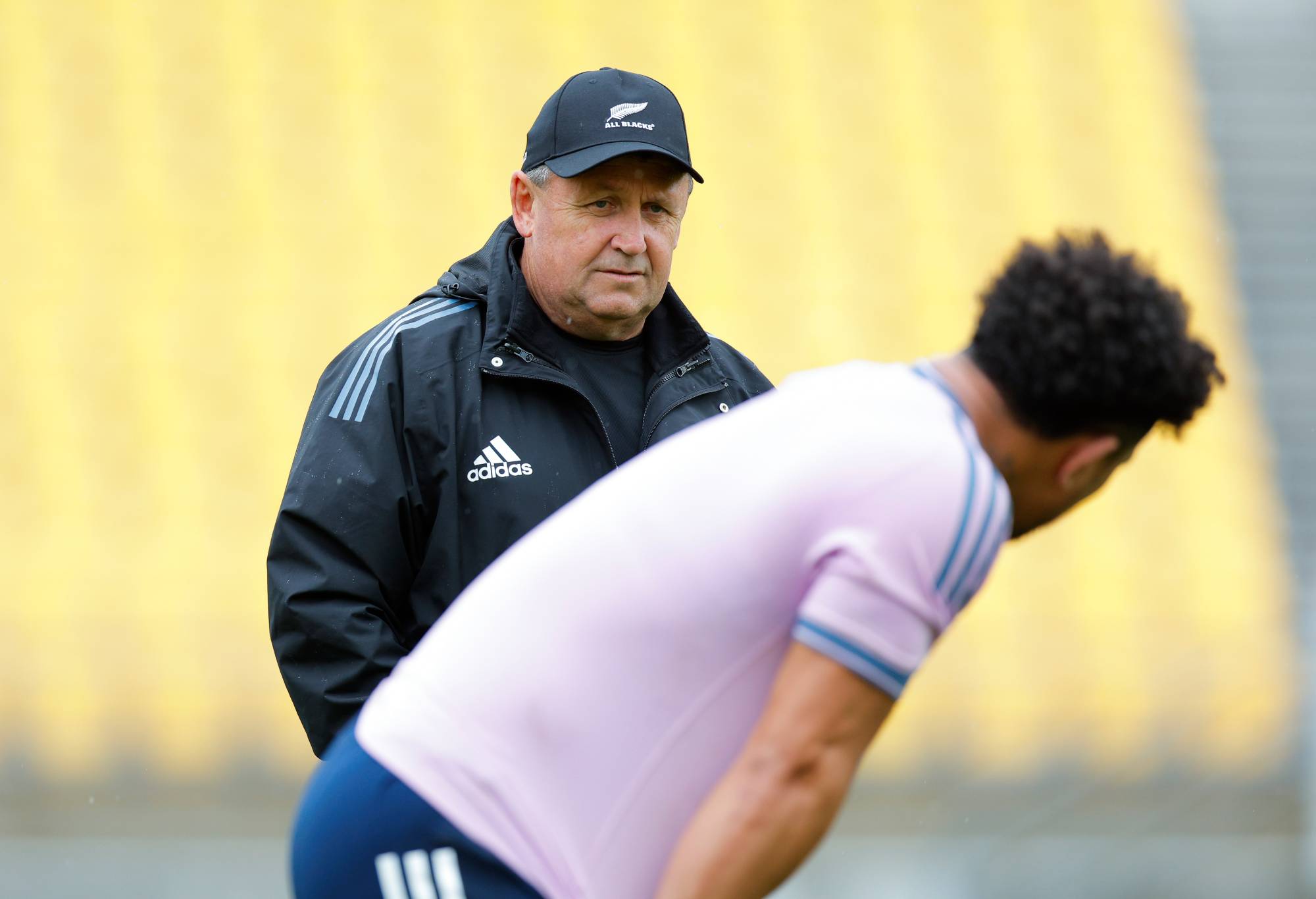 Ian Foster says he expects to be All Blacks coach when the team faces Argentina in their next Rugby Championship match despite being given no clear direction onf his future.

Foster was still in South Africa on Sunday when New Zealand Rugby boss Mark Robinson gave a media conference that annouced very little about the coaching situation – except that a review of Foster’s position would happen before the Pumas clashes.

Robinson declined the chance to back Foster for the rest of TRC at that news conference, and his wording sounded ominous at times – with suggestions nothing could be determined while the players and coaches were away from NZ.

The team has a week off before it will assemble in Christchurch on Sunday to prepare for their next Test against Argentina.

“I’m about to hop on a plane and go home and mow the lawns around the pool,” Foster told New Zealand media.

“I’ll be given feedback, no doubt, but my expectations are I’m the All Blacks head coach and later in the week I’ll be going to Christchurch and assembling with the team until I’m told anything different.”

New Zealand media had speculated Foster would be sacked and replaced by Crusaders coach Scott Robertson if the All Blacks had slumped to another defeat in Johannesburg.

Foster’s former assistant coaches John Plumtree and Brad Mooar were removed after the Ireland series defeat last month despite having re-signed through to the 2023 World Cup.

Robinson said NZR would review the South Africa tour and confirmed the governing body’s board would meet this week.

“We believe we know where we stand and just have to work through it,” Robinson said.

“There will be a board meeting at some stage … The board is ultimately responsible for the appointment of the coach. That’s to be determined in terms of timing.

“We’ll be making no further comment until that time which is likely to be the middle to latter part of this week.”

Foster appears to have the backing of his players, with reports that some of them had to be talked out of standing behind Foster at his post-match press conference.

After all the scrutiny on Foster in the NZ media, Robinson has now joined the coach in the glare, whith many believing NZR is mishandling the situation.

“There is potentially a far more serious consequence to this continued failure to provide clarity to Foster about his future and to publicly endorse him as the man to take the All Blacks through to the World Cup or relieve him of his duties,” wrote Gregor Paul in the New Zealand Herald. “And that’s the impact to his mental health. To leave him in limbo is bordering on reckless now.

“He said after the game that the stress he’s under has led to weight loss and that through his eyes, the media’s commentary and analysis on his plight has been vicious.

“He’s under the sort of mental duress that is almost impossible to imagine and at least if he knew he had the backing of his employer, the certainty that he’s going to be in his job through to the World Cup, he could try to reach a truce – a working alliance at least – with the media core from whom he clearly feels estranged.

“That Foster deserves better from his employer is in danger of becoming white noise – and that can’t be a tenable proposition for a sport with such grand ambition.”

Former All Black and prominent commentator Mils Muliaina was among those upset with the NZR approach.

“It’s the pressure of uncertainty once again,” he told NZ Radio network Newshub.

“Really, they should have been coming out and celebrating what was a tremendous performance from the All Blacks after what’s been a hard couple of weeks.”

Muliaina said Foster would be upbeat after beating the Boks at Ellis park.

“The performance they put out was tremendous and they thoroughly deserved the win, but again the unknown is there. He was asked again last night whether he thought, or knew, whether he was going to be the coach.

“I guess that’s why he’s found some resolve around his players. He’s definitely got the backing there. But it would be nice if the NZR came out and were really strong about their position.”

“I love these guys, they’re my crew now,” Cheika said.

“I was up on the last try, cheering. But then I started crying because I know I probably shouldn’t be doing this. It was a bit confusing for me, personally.

Cheika’s next task should be easier for him to enjoy, two matches against the All Blacks in New Zealand.

“I love going to New Zealand to play. There is a thing about rugby over there that is special and there is nothing like being a part of it,” Cheika said.

“It is going to be good going to Australia and having a few days off, and seeing my mum and my brothers and sisters and take the boys for a Leb feed at my mum’s place. But I am looking forward to going to New Zealand because it is a great place to go and play rugby.”

South Africa head coach Jacques Nienaber says going with a 6-2 split on the bench may have backfired for the Springboks in the loss to the All Blacks.

The Boks failed to overcome the early loss to concussion of wing Jesse Kriel in the opening minutes.

“We were over the try-line three times but we got zero points for that and rightly so,” said coach Jacques Nienaber.

“I think since we have been back, we have coached 45 games and we’ve probably gone with a 6-2 split more than 30 times and it did bring us some positive results with a World Cup win and series victory over the British & Irish Lions, but saying that we know it is a risk if you get a backline injury and it’s just unfortunate.

“We weren’t as accurate as we were last week and they kept offloading, taking high risks which we didn’t contain that well,” said Nienaber.

“I thought we did well to come back; 15-0 down against the All Blacks is a tough ask to get back into the game, which we managed to do in the back end of the first half and up to 73 minutes. And then we slipped at the back end.”

The ACT Brumbies will play in Super Rugby next season, carrying their foundation name for the first time since 2004.

The club has been struggling to fill GIO Stadium for games in recent seasons and is hoping a return to their original mission can help reconnect them with supporters.

ACT Brumbies Chairman, Matt Nobbs said ins statement: “It’s an exciting and proud day for the organisation and the club to officially re-introduce ourselves as the ACT Brumbies.

“Our commitment to our region will continue to grow, and we hope to confirm trial games outside of Canberra for 2023 shortly, but the Australian Capital Territory is and has always been our home and with this decision, we want to formally re-connect ourselves to our local community, so that they feel a sense of ownership and belonging to our club once again. “

Head coach Stephen Larkham added: “Speaking on behalf of the current group, and for past players who have proudly worn the ACT Brumbies jersey, this is a fantastic step by the organisation.”“The team under Dan have been playing some great rugby, and our job is to continue that on in 2023, but it’s also to genuinely engage with our community, so that they get that sense of pride in the team and the club.

“Generating support in the stands is obviously part of that, but it’s also about growing the game, giving kids a moment with a player which might inspire them to take up the game, or keep playing; that’s part of our purpose as a club and as head coach I’m excited to help drive that.”