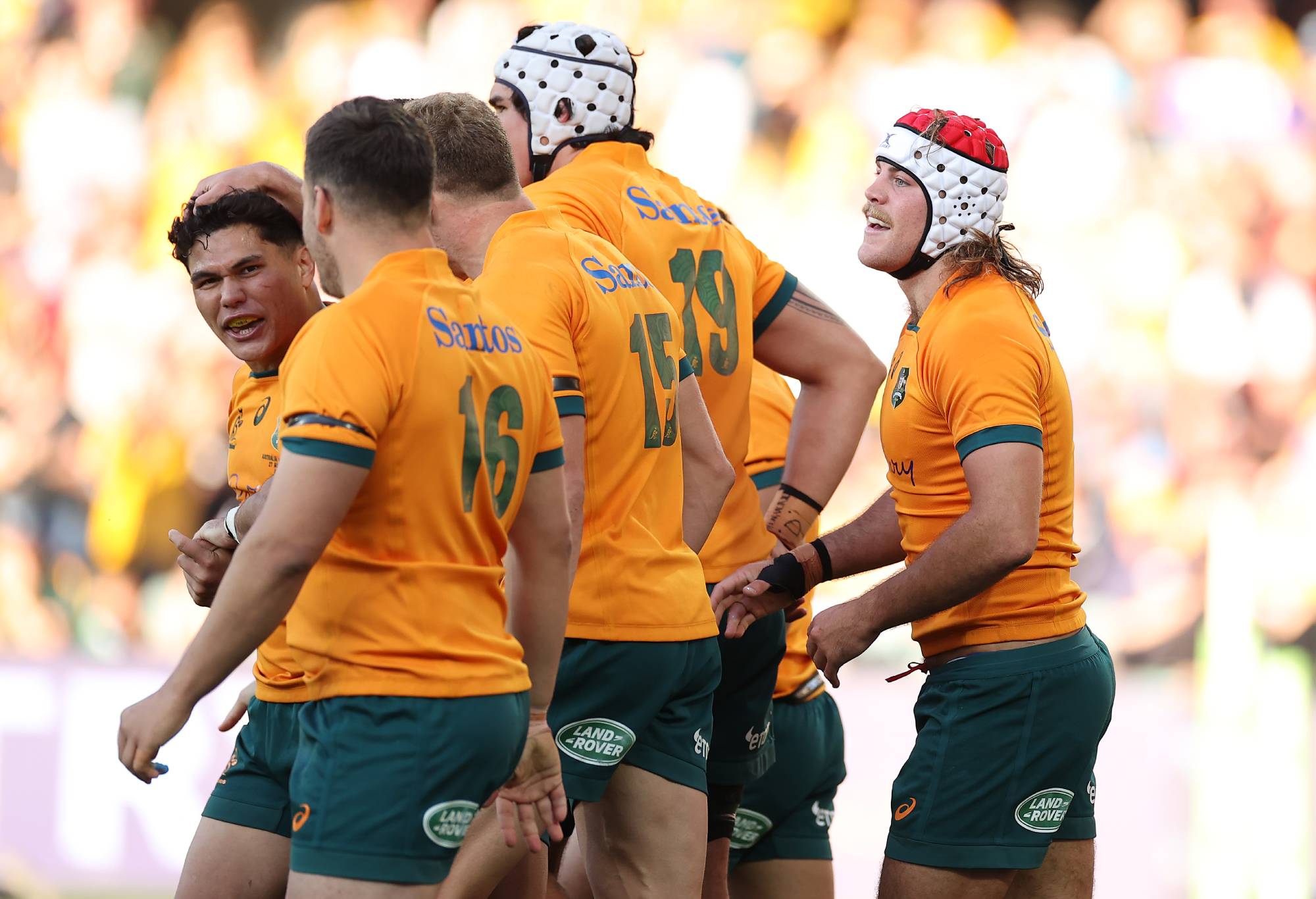 Barring any late mishaps, the Wallabies will go into Saturday’s second Test against the Springboks with an unchanged starting XV for the first time in more than four years – in stark contrast to the embattled Springboks.

It is the first time in Dave Rennie’s tenure, and the first time since the first and second Tests against Ireland in 2018, that the Wallabies have named the same starting team two games running, according to RA stats.

Rennie has shown faith with the team beat the Boks in Adelaide last weekend and for good reason.

Although the concession of two late tries came as a blow, depriving the Wallabies of a bonus point that allowed Argentina to go top of the table, it was an impressive performance by his starters.

There could be a change or two on the bench, with the full 23 to be revealed by Rennie at a media conference later Thursday.

Although expected, the retention of Noah Lolesio at No.10 backs up the praise he received from Rennie post-match, and assistant coach Scott Wisemantel.

“The one thing that we wanted from Noah was to be a bit more aggressive because he’s such a nice bloke,” Wisemantel said.

“It’s not being rude. In that role as a player who touches the ball more than most players in the team, he has to have that authority and that command.

“You actually have to practice it daily. Talking in wants and needs. ‘I need you here, I want you here, if you don’t show up, there’s going to be consequences’. It’s aggressive language. And off the field Noah is nothing like that. But that’s that’s part of his development, controlling men.”

Wisemantel acknowledged that the Wallabies were upset at squandering the bonus point.

“You’re filthy that you missed that point. You’re absolutely livid,” Wisemantel said. “We’re really disappointed with that last eight to 10 minute period. We had a chances. Even when it was three tries to one we had another chance off a set piece to do something.

The Wallabies have suffered a season of injuries and late withdrawals but this week it is the Boks who have been devastated with injuries as Jacques Nienaber rang eight changes to his starting side.

There will be a lot of eyes on teenage wing sensation Canan Moodie who has been sledcted for a debut.

“We are excited to get him in the mix,” said Nienaber.

“He had an awesome series in the URC and we followed him closely and we are excited to see him put his skill set into a Test match. He has been with us I think a month and we are really happy to see his progress within the team and how comfortable he became in the team.

“He is a very coachable guy. He has obviously got the skills and I’m very excited to see him. When you work with him you won’t say he is a 19-year-old. He is very mature for his age and he has got a good rugby maturity and a good rugby brain on him.”

Flyhalves Handre Pollard and Elton Jantjies both succumbed to injury in the 25-17 defeat to the Wallabies at the Adelaide Oval, meaning that Damian Willemse will start at No.10.

He will partner Jaden Hendrikse, who starts at scrum half with Faf De Klerk left out of the squad after his yellow card for striking Nic White.

“It is unfortunate for the two guys that got injured, but it is fortunate for Damian. He has played for us at flyhalf this year in the first Welsh Test in Pretoria – he played there in the second half,” Nienaber said.

“We are looking forward to seeing him in that position again, and the combination between him and Willie (le Roux).”

“With me and (Willemse), it is just building a good relationship and understanding each other during the week,” Hendrikse said.

“It is just sitting around each other and speaking about rugby, just getting to know each other. That is the main thing between me and him.

“We need to be on the same page and know what we have to do in each situation.”

Did Ian Foster just have an epiphany? If so, will we see it in selection or game plan for Saturday?
Rugby News: Brodie back for All Blacks, Boks’ wee drama, Bellamy wowed by Marika, Tahs make three signings
Go to mobile version