REACTION: ‘We blew it’: Wallabies stunned as ref hands victory to All Blacks in chaotic finish 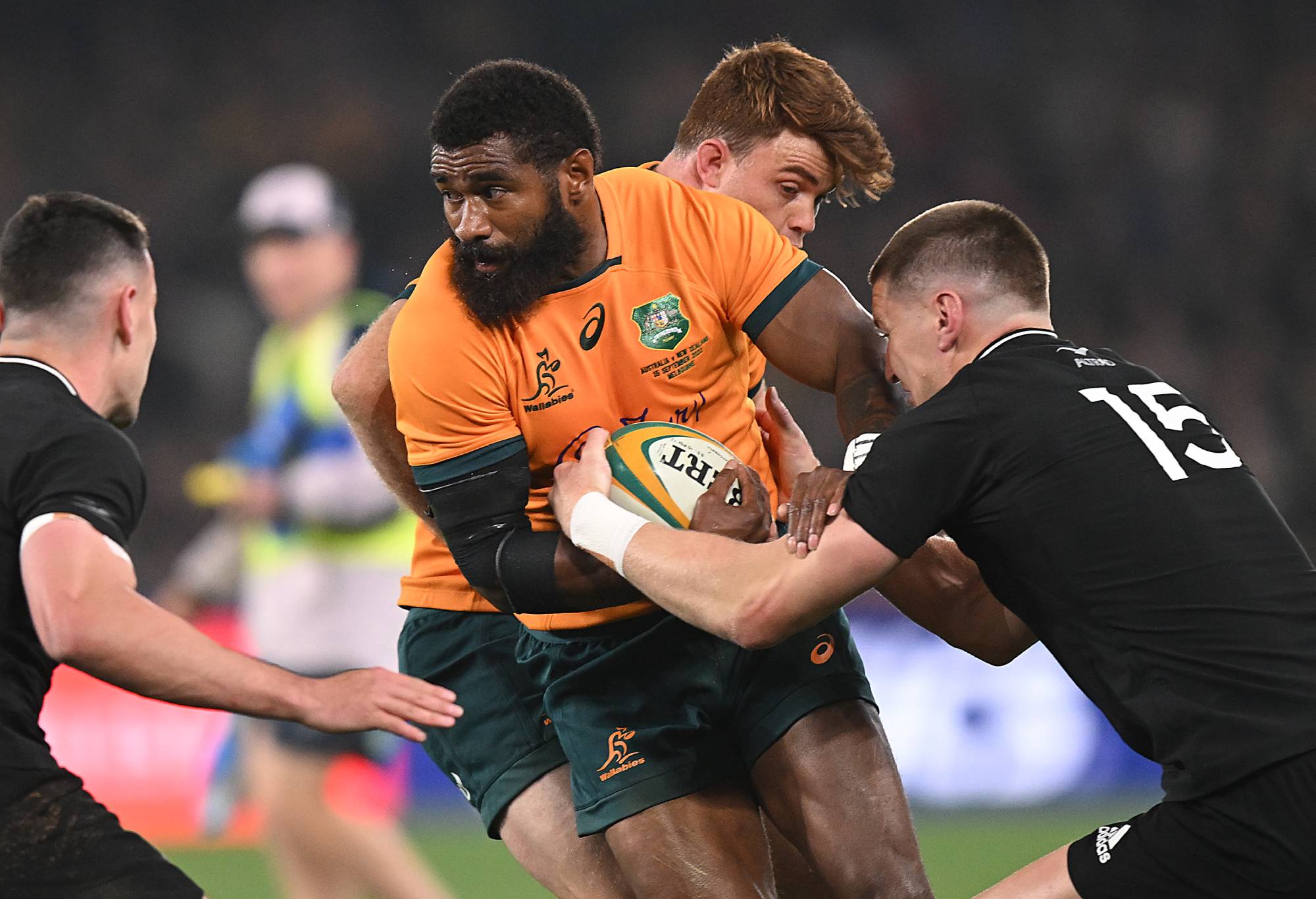 What on earth was that? The Bledisloe is blown for a 20th season and a French referee is set to become the most hated man in Australia after presenting the All Blacks an 81st minute win over a brave Wallabies at a heaving Marvel Stadium.

The Wallabies were leading 37-34 with 90 seconds left and on a penalty when Mathieu Raynal pulled up Bernard Foley for time wasting in front of his own sticks.

The All Blacks were awarded a scrum and after the siren Jordie Barrett ploughed over out wide on the final play .

The Aussies had come from 31-13 down after 56 minutes to edge ahead when Nic White pounded over a 48 metre penalty. The Australians were distraught at the finish as Raynal was booed from the field by many in the crowd of 53,245.

Australia had heroes everywhere and it was harsh on them to have to watch the All Blacks hoist the trophy yet again. Foley nailed six from six including a couple from out wide, and he didn’t deserve the nature of the finish.

Pete Samu put in a momentous effort as a starter, and Andrew Kellaway was supreme at fullback, scoring two tries and being denied a third by millimetres.

“Absolutely gutted. I don’t know what to say,” said Wallabies captain James Slipper. “We wanted to put in performance tonight and we just fell short there. Probably the most gutting way to finish a a game.

“When you play the All Blacks you have to make everything count and take your opportunities. Everything in the last 20 minutes was in our hands. We blew it.

“We have got to back it up next week and go to Auckland and we will go through the review process but it will take a while to get over this.”

Foley attempted to explain the decision that left commentators and fans scratching their heads and then struggling to cope with its magnitude.

“We were just understanding the line out call,” said Foley. “The ref said time off and he sped it up. It’s disappointing how good a game it was and yet we’re talking about the referee.

“I’ve been hurt a couple of times at the death by these blokes. They’re a good side and play the 80 minutes. It’s just disappointing we’re talking about a referee call after a great 80 minutes.”

Coach Dave Rennie said: “What we knew is time was out and he told the boys to play but the clock’s stopped so there’s no real urgency. It lacks a bit of feel for such an important moment in the game.

Slipper and flanker Rob Leota to calf injuries and endured three yellow cards. New Zealand had issues of their own losing Sam Cane and David Havili to head knocks.

The Wallabies showed their intent before the kick off when their ‘boomerang’ advanced on the All Blacks in face of the haka. The faces of props Slipper and Allan Alaaalatoa showed fierce passion, but a team that has struggled to get started early in games suffered yet another early blow when the game kicked off.

With heavy smoke hanging under the closed roof – what genius ordered that many fireworks in a closed venue? – Jed Holloway mucked up his catch from the Kiwis’ kickoff and Len Ikitau was forced to run the ball out.

The All Blacks received their first in a deluge of early penalties from Raynal and opted to go for the line again after Ethan De Groot was held up.

On three minutes after a relentless rolling maul, boosted by the presence of David Havili and Will Jordan, Samisoni Taukei’aho went over for the opening try.

A beautiful chip over the top by Barrett! ????

Richie Mo’unga kicked the conversion and shortly after hoisted a high contestable kick that Bernard Foley, in his first Test for three years, failed to gather it in.

Slipper conceded two quick scrum penalties, pushing him six ahead of the next most penalised player in the competition, and after 11 minutes the All Blacks were up 10-0.

But the Australians fought back with real aggression and desire.

Pete Samu, who had a huge first half, made a break and fed Tom Wright but the All Blacks covered well to stop Marika Koroibete crossing. A penalty advantage gave Foley the first points from in front 16 and on 21 minutes the Wallabies thought they’d scored a special try through Andrew Kellaway.

Holloway produced a cute flick pass at the back of a maul and the ball eventually found Kellaway on the right. He dived for the line late and thought he’d scored but Rieko Ioane’s desperation tackle pushed Kellaway’s hand under the ball and the try was ruled out after TMO review.

The Aussies kept coming and on 27 minutes took a penalty to the sideline and were rewarded for their bravery, with their maul storming the NZ barricades and Rob Valetini driving over the line.

Sam Cane was off injured and his replacement Dalton Papali’I was sin binned moments after coming on.

Samu made another storming break, and then Koroibete smashed through Clarke in a tackle.

“This is where the All Blacks have been struggling, with their backs against the wall,” said Sonny Bill Williams in commentary. And biy did they prove him wrong.

Australia pounded at the door through 15 phases, coming agonisingly close several times before Holloway was isolated and concded a penalty.

It was an incredible defensive effort, a man down, and swung the game the visitors’ way.

From the lineout that followed the penalty, Hoskins Sotutu showed deft hands and sent an inside ball to a raging Clarke, who went on a crazy jagged 60 metre run deep into the heart of Australian territory.

Wright was sin binned in bringing him down and Darcy Swain followed soon after for an ugly tackle that forced Quinn Tupaea from the field with a knee injury.

With a two man advantage the All Blacks went to work but lost the ball over the line through Taukei’aho then butcered an overlap when Rieko Ioane threw the ball behind Beauden Barrett.

Australia reached halftime all level, but the All Blacks were over within a minute of the restart, Taukei’aho making up for his sloppiness before the break with a surging run to the line.

Foley narrowed the margin with a penalty but then Mo’unga added a try. Jake Gordon became the third Australian off to the sin bin and with him out of the action, Beauden Barrett played a delicious chip over the Australian defensive line. Will Jordan gathered the kick and with an impudent step away from Kellaway gave him a clear run to the line.

“You could talk about that try all night, right back with the communication to Beauden Barrett and the little chip kick over. The timing and execution was exquisite,” said Mehrtens.

Australia were drowning but grabbed a lifeline through Kellaway as a flat pass from Foley sent him over to make it 31-20 with 17 to play.

Then the Melbourne Rebels star added another five minutes later – his fifth in four games against the All Blacks.

“People in the stands were thinking about going to grab their car early, they have sat back down,” said Tim Horan on the Stan commentary.

Nic White smashed over his penalty and the Aussies thought they had pulled off one of the sport’s greatest ever comebacks.

But then Raynal stunned everyone.

“Ridiculous call from the referee,” fumed Tim Horan. “Bernard Foley was waiting to kick the ball out.”

RA boss says Rennie ‘absolutely’ locked in for RWC with Wallabies one loss away from worst-ever Test ranking
‘Clear cut call’, ‘They’ve got to be better’: Ruthless All Blacks back ref as Foley felt he ‘let team down’
Go to mobile version