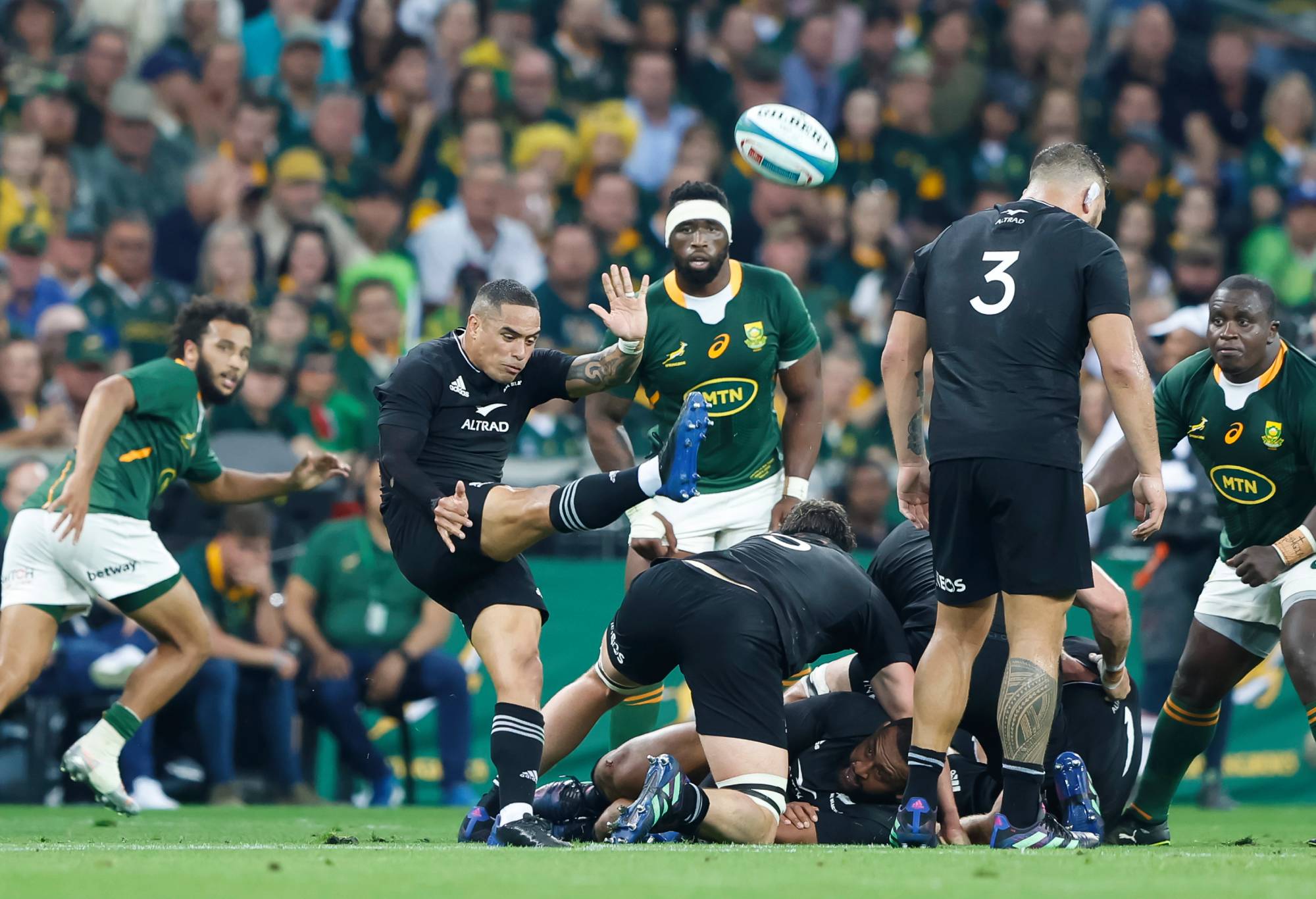 South Africa were celebrating their biggest win over New Zealand in 94 years on Sunday and the media of both countries turned on the All Blacks after a fifth loss in six Tests.

Wing Kurt-Lee Arendse scored his first international try but was then sent off as the Boks claimed a comfortable 26-10 victory in their Rugby Championship opener at the Mbombela Stadium.

They bossed the set-piece and breakdown, with hooker Malcolm Marx particularly devastating in his 50th Test.

Replacement back Willie le Roux also crossed for a try and fly-half Handre Pollard kicked 17 points for the home side.

It was South Africa’s biggest win over the All Blacks since 1928, despite finishing the game with 14 players after Arendse was sent off for a dangerous tackle in the air after 75 minutes.

New Zealand managed a late try through flanker Shannon Frizell, but it is a fifth defeat in their last six Tests. The result will pile more pressure on head coach Ian Foster, especially as they never looked like winning.

“The Springboks threw a hell of a lot at us, we did quite well to absorb it but it took a lot out of us. They kept applying pressure, especially at the breakdown and that disrupted a lot of our flow,” All Blacks captain Sam Cane said.

“We’re bitterly disappointed, it really hurts. We must get better at the breakdown and the contestables (in the air). I can’t ask any more of the team in terms of the belief and the effort. It is just small margins at this level.”

New Zealand made too many unforced errors with stray passes and knock-ons from carries and will have to show a vast improvement ahead of the second Rugby Championship match-up between the two sides at Ellis Park in Johannesburg next Saturday.

The Boks crossed for the first try on eight minutes as Pollard kicked a high ball that was not collected by All Blacks fly-half Beauden Barrett and Lukanya Am sent Arendse away to dot down in the corner.

New Zealand got their first points in the 36th minute, with their first scoring opportunity. Jordie Barrett landed a penalty from in front and they will have been relieved to go into the break only 10-3 down.

They scored a try after a superb break from wing Caleb Clarke, playing his first test in two years, was finished by Frizell.

But the Boks had the last say as Le Roux crossed for an easy score after another loose All Blacks pass in their own 22 provided him the opportunity.

“It was a grind, exactly what we wanted. We wanted to match them up front,” Bok captain Siya Kolisi said.

“We were good with the high balls, we kept it as structured as possible and we had the discipline to make the tackles.

“Malcolm (Marx) was brilliant, every time there was a ruck he seemed to come up with the ball. He has been a big player for Springbok rugby for some time.”

New Zealand’s media is getting used to sharpening their insults in recent times, and the focus was turned to under fire coach Ian Foster once again.

It was reported last week that Foster could be sacked should the team not win at least one game of the two in South Africa and they currently look miles away from making that happen.

If Ireland cracked the All Blacks, South Africa certainly broke them and any hope, however forlorn, that a recovery is possible under this coaching regime has surely gone.

“It’s time to ring Scott Robertson, tell him to be waiting with his hand-picked assistants and for him and Jason Ryan to get on with rebuilding a legacy that is in danger of being horribly tainted if there is not definitive action taken,” wrote Gregor Paul in the New Zealand Herald.

“There is nothing now that can happen to convince anyone in New Zealand – anyone who knows the game – that the All Blacks are going to miraculously improve without a total and brutal cleanout and reset.

“Confidence has been shattered, all hope lost and it would be madness for New Zealand Rugby to do anything other than get out the cheque book, pay off the termination fees and usher in a new era.”

Also in the NZ Herald, Liam Napier bemoaned a lack of response from the ABs under enormous pressure.

“In their defining hour, their day of reckoning, the All Blacks barely fired a shot,” wrote Napier.

“Mbombela Stadium exploded at the seams with 45,000 screaming South Africans forming a sea of green; a piercing atmosphere. The locals sure had plenty to shout about, too.

“In that white hot cauldron, among swarming Springboks, on their first venture to South Africa in four years, the All Blacks failed to cope with the relentless aerial and physical assault on their senses.

“It wasn’t the All Blacks were intimidated. It wasn’t they were caught off guard, either. The Boks stuck to their unimaginative kick-heavy, forward-dominated blueprint and executed it to perfection. The All Blacks knew it was coming – and still had few answers.”

Writing for Stuff, Marc Hinton said it was no disgrace to lose to South Africa, but the nature of the loss showed change was needed.

“This was a limited, painful and at times gormless performance from an All Blacks side that has completely lost its mojo, its confidence, its rhythm and, to be frank, its wherewithal.

“Ian Foster’s coaching tenure now hangs by a slender thread after his All Blacks proved patently ill-equipped to handle a superb display of high-intensity rugby from the world champion Springboks,” wrote Hinton.

“The South Africans started and all-but finished this Rugby Championship opener, in front of a passionate, seething crowd of over 43,000 at Mbombela Stadium in Nelspruit, with players being driven off the field in medi-carts, but in between they applied a massive knockout blow to these reeling All Blacks with a 26-10 victory that was every bit as one-sided as it sounds.

“It is no disgrace to lose to a side of the calibre of this South African outfit. Plenty have over the years, and plenty more will too in days to come. But to go down so decisively, and largely fail to apply anything resembling sustained pressure on their opponents for so much of this one-sided contest, well, it spoke to how far this All Blacks side has plunged.”

“They may have failed to keep the All Blacks tryless in a Bok win for the first time since the Wellington success in 1998, but the 16-point buffer was by far their most convincing winning margin in the professional era,” wrote By Khanyiso Tshwaku on news24.com

“It wasn’t pretty – seldom is the Bok way of rugby – and it is said that only a mother could love how they go about their business.

“However, they earned the love of not just the 42 387 who packed into the giraffe-propped nation, but the entire country. “It was aggressive It was physical. It was faultless and flawless in every sense.”

“The Springboks have seldom, if ever, dominated an All Black side so comprehensively. Despite a 26-10 final scoreline, the tourists were lucky it was not a lot worse.

“New Zealand hardly had any ball, they lost the aerial battle, they were destroyed on the ground and smothered when they did try to launch attacks.

“All Blacks coach Ian Foster’s time in charge is now surely measured in hours, not days.”