REACTION: ‘I’ve got no idea’ – Foster questions remain despite ABs proving they’re ‘one heck of a team’ 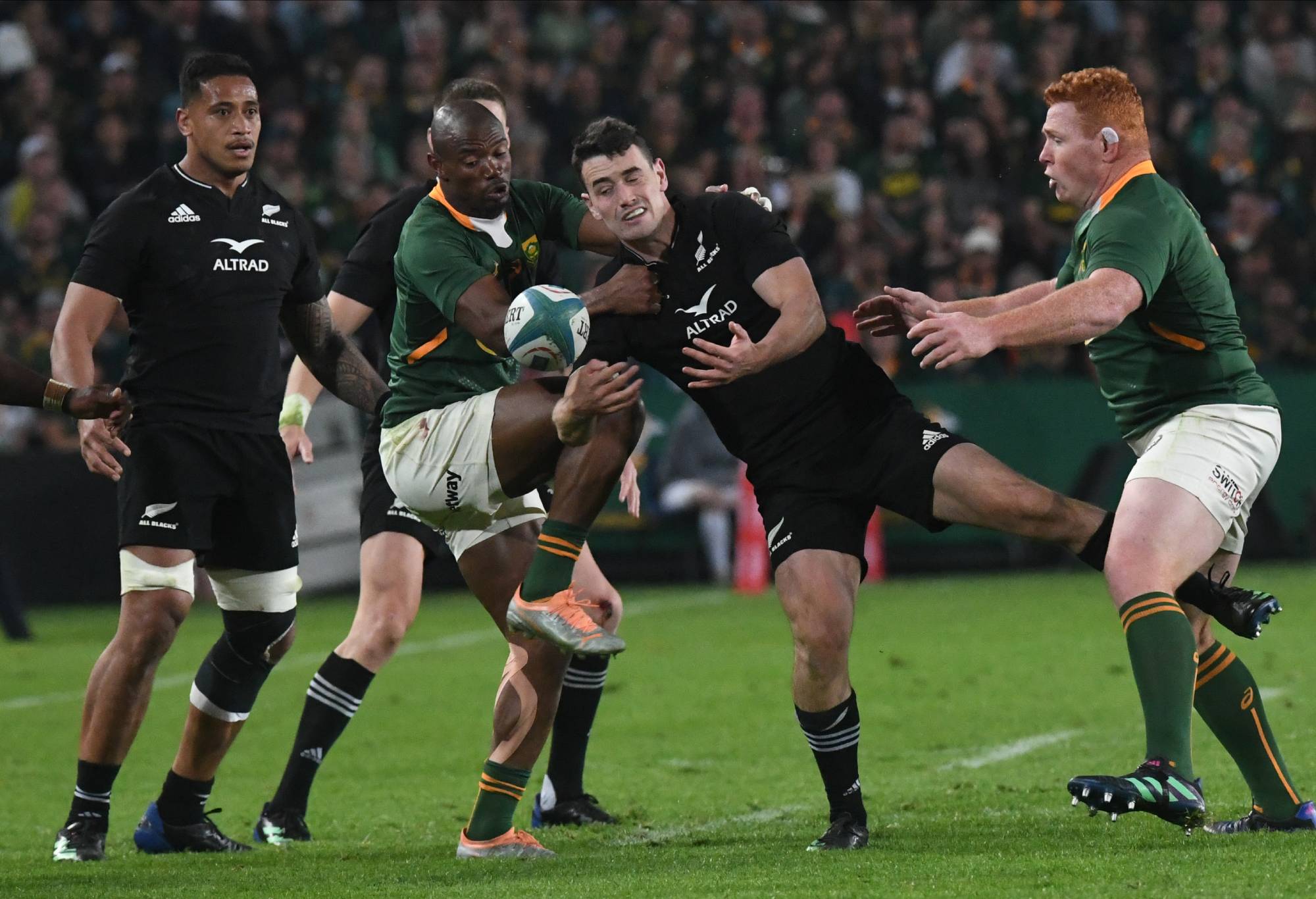 New Zealand coach Ian Foster said he is unsure what the future holds after his team’s rousing win over the Springboks at Ellis Park.

Centre David Havili and lock Scott Barrett scored late tries as New Zealand eased the pressure on Foster with a superb 35-23 victory over South Africa in their Rugby Championship clash.

Captain Sam Cane and hooker Samisoni Taukei’aho also scored tries as the All Blacks silenced the 61,519 crowd to claim what will be viewed as a famous win having lost five of their previous six Tests.

The Springboks were not as clinical as they had been in the 26-10 victory over the visitors the previous week as they scored tries through sublime centre Lukhanyo Am and winger Makazole Mapimpi, but faced opponents who were vastly improved.

Whether the victory is enough to save Foster’s job will become clear in the coming days, as New Zealand prepare to host Argentina in their next Rugby Championship clash on Aug. 27, while the Boks travel to play Australia on the same day.

“I’ve got no idea. I’m just going to enjoy tonight,” Foster said when asked about his future. “There’s no doubt it’s been a pretty stressful time. We’ve been trying to find our feet as a team.

“The stress has been good for me, I think I lost one kilogram over the last week, so a couple more weeks I’ll be in good shape,” he said with a smile.

The All Blacks were better in the scrum, breakdown and under the high ball, all areas they had struggled in seven days ago in Nelspruit.

“Proud is an understatement,” Cane said. “Adversity really challenges your character and this group has that. We had to get a few parts of our game right as this is one of the toughest places in the world to come and play.

“We were a lot better at the breakdown and dealt with the contestables better. We defended the maul well. That is what test footy is all about, getting the small things right to build pressure.”

It took until the 25th minute for New Zealand to open the score via a penalty, but the visitors then accelerated into a 15-0 lead.

They kept possession from a Caleb Clarke break and Cane crossed in the corner, before Taukei’aho barged over from close-range after incessant pressure.

The Boks had a good close to the half, though, as Am showed great strength to beat the tackle of Clarke and score, and flyhalf Handre Pollard landed a penalty from 55 yards that sailed through the Highveld air to make it 15-10 at the break.

The teams traded penalties before the Boks scored their second try, a trademark steel from Malcolm Marx at the breakdown saw Damian Willemse float a long pass for Mapimpi to cross in the corner.

The Boks took the lead for the first time on 68 minutes after Beauden Barrett tackled scrumhalf Jaden Hendrikse without the ball in his own 22 and received a yellow card.

But despite being a man down, the All Blacks produced a big finish as Havili and Barrett dotted down to complete the win.

“The first half, the game was fast and we couldn’t put out game-plan on them,” South Africa captain Siya Kolisi said.

“We could have worked harder there. We knew they only need a couple of moments to make it count and they did that. Congratulations to them.”

“If this was Ian Foster’s last stand as All Blacks coach, it was at least marvellously defiant, supremely resilient and most certainly, unexpected,” wrote Gregor Paul in the New Zealand Herald.

“This was the best performance of the Foster era – one that had a touch of class, a huge amount of bravery to stay in the fight and a relentless desire to compete in the places in which they haven’t managed to compete previously.

“It’s not possible or wise to say the All Blacks are fixed because inconsistency has been the bug this team can’t shake, but they are certainly not broken and hope has suddenly sprung from nowhere.

“Whether the victory was enough to save Foster’s job will become clear in the coming days, but the satisfaction he and his All Blacks can rightly feel at sticking the proverbial finger up to the critics who said this team was dead and buried, will be beyond measurable.”

Liam Napier, also in the NZ Herald, added: “Set against the tense, fraught backdrop of sustained pressure on Ian Foster’s under-siege coaching tenure, the All Blacks rocked up to the home of South African rugby, and turned the form book on its head to emerge with an emphatic victory that does not tell the toll it took to achieve.

“Whether this heroic result is enough to save Foster’s embattled term remains to be seen but, for now at least, the All Blacks deserve to celebrate one of their great upset triumphs.”

Marc Hinton, on Stuff, wrote: “After all the navel-gazing and the finger-pointing, the real All Blacks finally emerged at an electric Ellis Park in Johannesburg just in the nick of time to revive their Rugby Championship hopes. It now remains to be seen if it similarly resuscitates the career of head coach Ian Foster.

“It just might do. This was more like it from the All Blacks in a must-win encounter at one of the hardest places in the international game to come get a result. The New Zealanders upped their game in just about every facet after their 16-point defeat in Mbombela a week ago, and survived a storming Springboks comeback to gallop home to a memorable 35-23 victory.

“It snapped a run of three straight defeats and, most importantly, it demonstrated palpably that these guys are still one of the better teams in the international game. There had been doubts after five defeats in their previous six outings. But you don’t get a result like this, in circumstances like this, without being a heck of a rugby team.”

South Africa’s media focussed on failings of their own.

“Appalling selections by the Springboks coaching staff came back to haunt their team at Ellis Park on Saturday night when the desperate All Blacks came back from the dead of their loss in Nelspruit the week before to beat the Boks 35-23,” wrote Mike Greenaway on Iol.co.za.

“The inability of the South Africans to win primary possession was key to their downfall and much of that failure was due to the coaching staff failing to pick Malcolm Marx to start the game, while the recall of Duane Vermeulen was a failure.

“The ‘Ellis Park factor’ that was so debated going into this match ultimately favoured an All Blacks team that so often have dined out on the Highveld factor because it favours their running game, and once more that was the case.

“The Springboks knew a backlash was coming from the ailing All Blacks after the mauling in Mbombela yet they could not deal with it in a first half that belonged to the fiery visitors.”