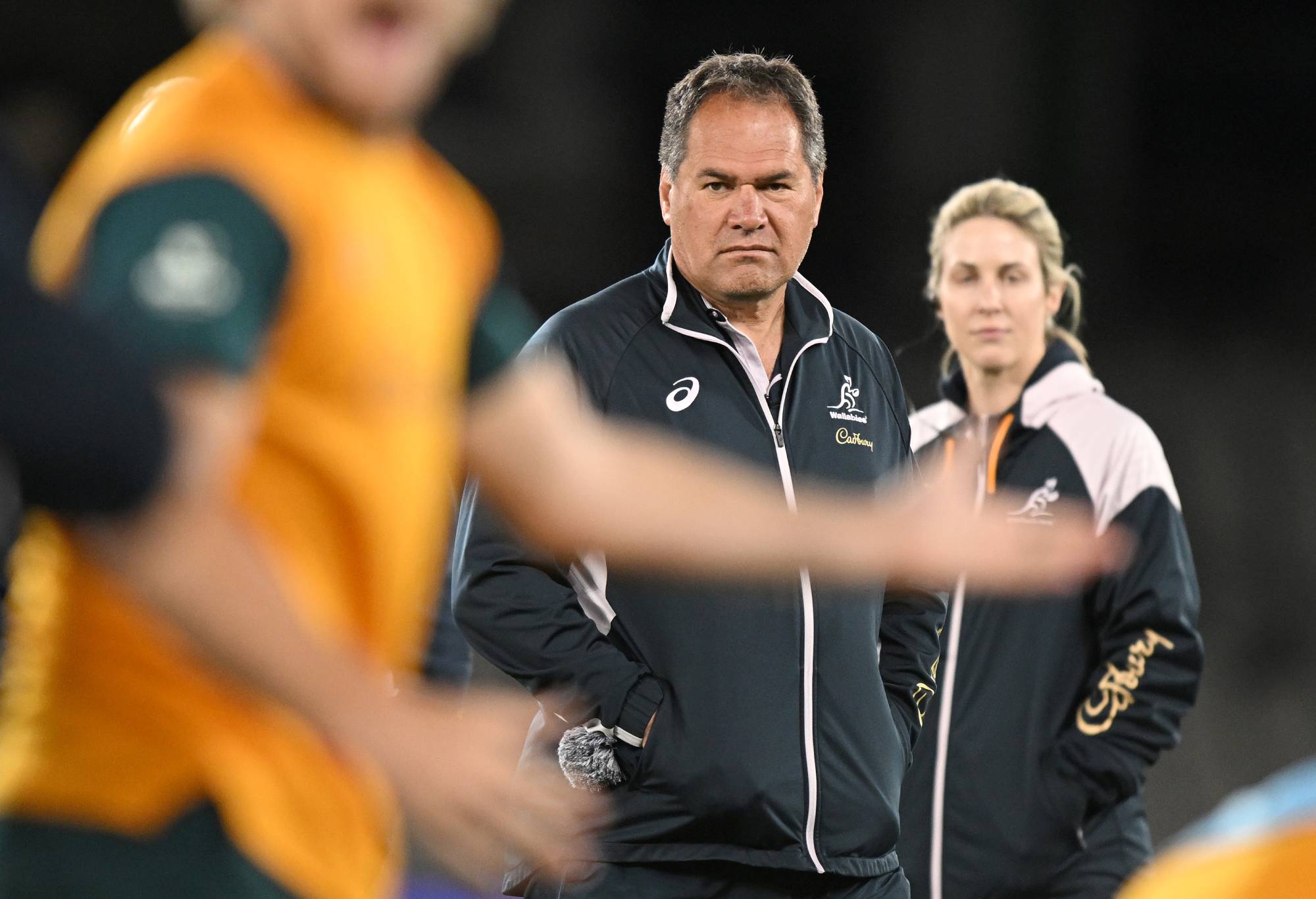 The Wallabies will fall to their worst-ever place on the world rankings if they lose to the All Blacks on Thursday night, but Rugby Australia’s chairman says the team is heading in the right direction regardless of the result.

RA chairman Hamish McLennan was asked if coach Dave Rennie would still be coach of the team at the World Cup regardless of the results of the games leading into the tournament and replied: “Yes, absolutely. Absolutely.”

McLennan, speaking at a sponsorship announcement at Marvel Stadium five hours before the kick off to the opening Bledisloe Cup match. A loss to New Zealand will take Australia to ninth in the world rankings – they have never been officially ranked that low before.

“Dave’s done a great job in settling the team down. There’s been real progress that’s been made. He’s as frustrated as anyone,” McLennan said.

“The world rankings you can sort of use them as a data point but everyone in world rugby can see that the Wallabies have come back and are on the move and are heading in the right direction. So I take a lot of heart from that.”

While there are those who dismiss the relevance of the complicated rankings system, there is no escaping Rennie’s Wallabies record. He has 11 wins, three draws and 13 losses for a 40.7 percent win record.

He said the Wallabies inconsistent results this season have been “a little frustrating.”

“But if you look at the TRC, every team’s won one, lost one,” said McLennan. “If you can knock over the Springboks, and even playing Argentina in that country is difficult, so I think Dave’s made real progress.

“It’s a pretty obvious thing to say but they need more consistency in their game.”

He said the issues faced by the All Blacks showed what a tough game Test rugby is to dominate.

“I don’t take delight [in Kiwis’ problems] but the troubles that they’ve had just shows you how hard it is to get those combinations right in any team. They’re quite fragile organisations.”

McLennan was boosted by a sold out crowd for the game in Melbourne, having taken the decision to move the game from its usual Saturday timeslot to avoid a potential clash with NRL and AFL.

“The general level of interest is off the charts,” he said. “Playing on Thursday night is a useful experiment.


The great rugby reset: You will own nothing, and be happy

“The fact we’ve sold the stadium out shows there’s real power in the Wallaby brand and interest in rugby.

“I’ll be interested to see how the ratings are – the fact we’re on the main Nine channel tonight is good. State of Origin is played midweek so why not? It’s all about creating clear air for the game.

“We did Adelaide too which was an experiment that paid off, played in the afternoon.

We’ll schedule more and more games in prime time and just figure out the best combination for the Wallabies and how to play them, where to play them.”

That led to a question about the hosting rights for the World Cup in 2027.

“It’s a really hard call. I haven’t landed on an answer to that yet,” said McLennan. “There’s an argument that says we should be serving the major home unions, where there’s a lot of history, like Queensland and New South Wales, but then what’s to say we couldn’t host it to 60,000 people in WA or potentially 100,000 in Melbourne?

“That’s pretty exciting. The dollars have to really drive it too. We’re looking at setting up an endowment fund to fund rugby in the future when I’m dead and gone of well over $100 million, so that we don’t go through what we went through in 2020 through COVID.”

McLennan and the RA board have been holding regular meetings with New Zealand officials over their bombshell earlier this year that they were considering leaving Super Rugby.

While cagey on the progress of those talks, McLennan rejected suggestions that the Australians were bluffing.

“I think the new regime understands and appreciates that New Zealand’s future is tied to Australia’s success,” said McLennan.

“Whether you call that respect, I don’t know, but I think there’s an acknowledgement that we’re actually a pretty important part of their mix now.”

Breaking away was a real option, he added: “we wouldn’t have said it if we weren’t real.

“There’s no doubt, we’ve said it publicly, that the high performance outcomes would probably be better with New Zealand in the mix.

“But we’re not going to play second fiddle, so time will tell if we’re bluffing.

“They know we’re serious – we’ve got the backing of our member unions, Super Rugby club chairs and Channel 9 to go domestic.

“And look, we haven’t won a Bledisloe in 20 years so who’s to say that a domestic competition wouldn’t deliver more money to Rugby Australia and possibly, with more teams and more players, better high performance outcomes? We’ll see.”

Meanwhile, McLennan said the success or failure of the revamped Giteau Law wouldn’t be known until the World Cup.

“The most important thing is that we preserve the integrity of our local competition. So if you look at what’s happened in South Africa as a case in point or Argentina their players are all playing overseas,” McLennan said.

“Having a home competition, whether it be domestic or with New Zealand is really important. It’d be great philosophically if we could get every A grade player back but we can’t.

“What we’re trying to do is find that happy balance. Moving from two to three players under the Giteau Law was a sensible decision. And if you look at the injury count, we’ve been up slot new players in. It’s working for us but the truth will be how we go in the World Cup next year.”

Rugby Australia announced a multi-year partnership with R.M.Williams on Thursday, reuniting the organisations. As an Official Partner of teams in gold, most notably the Wallabies and Wallaroos, R.M.Williams will undertake a number of collaborations and dressing opportunities with the players, as well as the introduction of a licensed product offering in 2023.

“We’ve got a lot alignment there, they have pumped a lot of money into the Force,” said McLennan. “I really respect them for how they’ve held up their side of the bargain. I think, R.M. Williams coming on board is a further proof point.

“We have a very open, honest sort of discussion about a lot of things with rugby. Let’s not forget, if we didn’t have the Force, we wouldn’t have launched the domestic competition in the middle of COVID. And without Victoria and WA it would have been very hard to fund the World Cup.

“So their support of the Force,  anchoring WA, was really critical for us winning the World Cup, which, in my opinion, will save the game here locally.”

The great rugby reset: You will own nothing, and be happy
REACTION: ‘We blew it’: Wallabies stunned as ref hands victory to All Blacks in chaotic finish
Go to mobile version