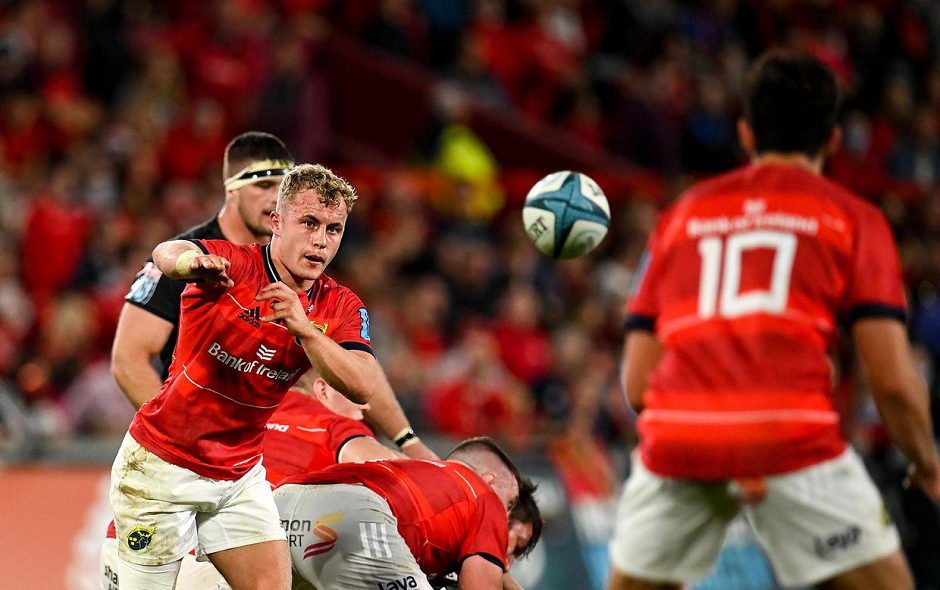 Munster vs Dragons : Where and when is it on?

11 players have been released from the Ireland camp to their provinces in order to access match minutes in the United Rugby Championship this weekend with Craig Casey and Gavin Coombes returning to Munster.

In further good news for Johann van Graan, prop Roman Salanoa does not currently require surgery on his injured ankle, as he continues his rehab.

Springbok centre Damian de Allende (abdomen) has stepped up his recovery from injury but he will not be available for the clash with the Dragons.

Full-back Matt Gallagher suffered a low-grade calf strain and will be assessed throughout the week. Jack Daly suffered an ankle injury in training last week and is facing a spell out.

The Munster squad returned to the High Performance Centre on Monday ahead of Saturday’s United Rugby Championship clash against Dragons at Thomond Park (5.15pm).

Tickets for the game are available here.

There were eight Munster senior and Academy players in action for Ireland and the Ireland U20s over the weekend.

We are back in #URC action against Dragons at Thomond Park on Saturday at 5.15pm!

With no Six Nations action coming up this weekend, Craig Casey and Gavin Coombes return from international camp and will train at the HPC this week.

Academy trio Patrick Campbell, Tony Butler and Ethan Coughlan helped the Ireland U20s to a win over their Italian counterparts at Musgrave Park.

In player news, Aran Hehir has joined the squad as scrum-half cover having impressed with Shannon RFC in the All Ireland League.

Hehir is an Ireland Clubs international who has previously lined out for the Munster U18 Clubs team and came up through the ranks at Shannon and St Clement’s College. Conor Murray, Craig Casey and Ethan Coughlan have been on international duty with Rowan Osborne also unavailable.

A proper derby: Reds triumph in cracker at Leichhardt
the Chiefs squared off with Crusaders Rugby in Christchurch
Go to mobile version