Ireland v Australia at Aviva Stadium in the 2022 Autumn Nations Series on 19th November 2022. Ireland faces the Wallabies in their final Autumn International and their last game of 2022. 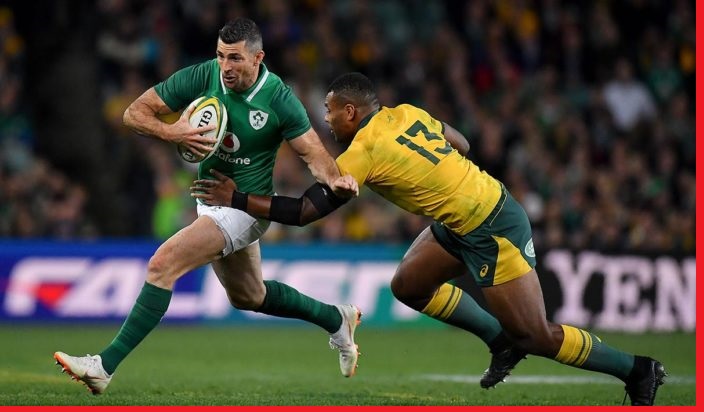 Andy Farrell is set to name his Ireland team to face Australia this weekend as his side look to end the year with another victory.

The Dublin clash will be Ireland’s final match of 2022 and their last fixture before the start of the Six Nations in February.

Johnny Sexton will captain the side for the Wallabies clash after declaring himself fit. There were fears that the fly-half would miss the game after he suffered a dead leg early in the second half during Ireland’s stirring victory against South Africa a week and a half ago.

But the Leinster star has reassured Ireland fans that he is “ready to go” against Australia.

Ireland will be looking to add to their Autumn International wins against world champions South Africa and Fiji on Saturday (8pm kick-off), while Australia is expected to up their game after recent defeats to France and Italy, as well as a narrow victory over Scotland.

Dave Rennie insists Australia “know the enemy” but are not playing the underdogs tag this week as they prepare for Saturday night’s big clash with Ireland.

Rennie has named close to a full-strength side for the Autumn series showdown at the Aviva Stadium, where the hosts are hoping to equal a record 12th successive home win that was set during Joe Schmidt’s reign.

But the Wallabies head coach started the week on the back foot after facing a barrage of criticism for the display against Italy in Florence, with the Azzurri beating Australia for the first time.

That came on the back of the Wallabies coming within two minutes of beating France in Paris, and Rennie has reverted back to the core of that line-up, with 10 changes made from last week.

Ireland are favorites heading into this one and Rennie said: “I think everyone likes being an underdog, but we haven’t used that term.

“We know we’re playing an outstanding side and we’re going to have to be at our best.

“We’ve had a massive focus on us. You can show a lot of footage of how good they are but I’m not sure that’s going to help us.

“So, we know the enemy, but it’s important that we’re really clear on the type of game we need to play to try and put them under pressure.”

How to watch New Zealand All Blacks vs England Rugby Northern Tour 2022 ” When does it start, Live streams and schedule”
England 25-25 NZ Rugby at Twickenham
Go to mobile version