‘Far out, this could be anything’: When the Wallabies faced down a lion tamer, and Adelaide witnessed a mauling 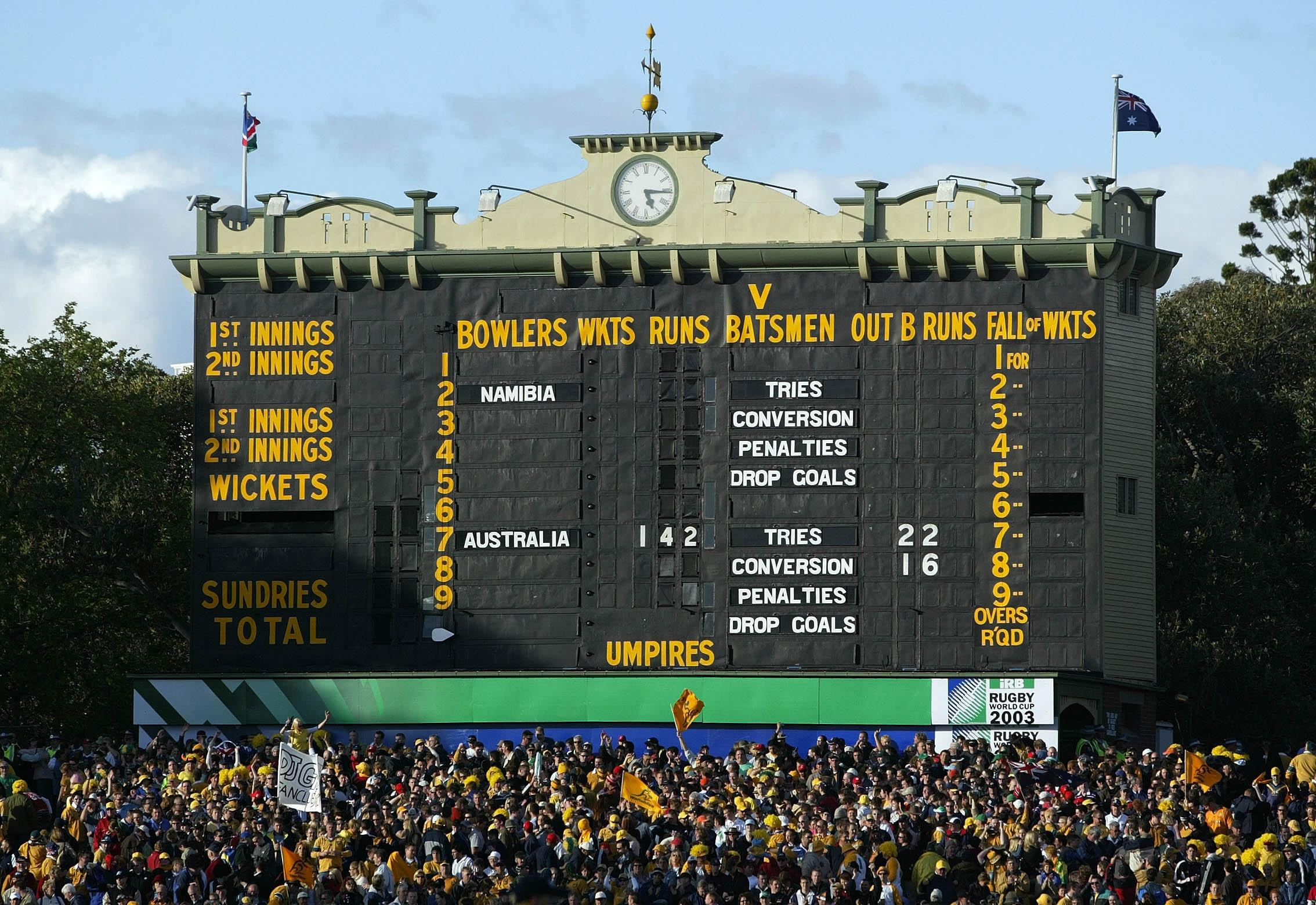 The South African pack contains some fierce competitors with big reputations, but no one quite as awe-inspiring as a former rugby-playing African visitor to the Adelaide Oval.

At the 2003 World Cup, Namibia sent out a second-string side against the Wallabies on the famous cricket ground, which will host its first rugby Test in 18 years on Saturday when the Wallabies host the Springboks.

A Wallabies, led by Chris Whitaker in his only Test as captain, racked up a cricket score, overwhelming the Africans 142-0.

Whitaker, remembers the lead-up more than the game itself – which was just a blur of gold jerseys running across the try line.

It was a different time in the sport and in Adelaide. Gone now are most of the quaint old grandstands, which were packed full for that 2003 Cup game on a blazing afternoon. Gone too are the massive margins that were a feature of tournaments at that time, as the sport was less than 10 years from the advent of professionalism.

The cricket scoreboard at the Adelaide Oval shows the final score of Australia’s 142-0 victory over Namibia. (Photo by David Davies – PA Images/PA Images via Getty Images)

The world was a bigger place too, with the Australians knowing little about the Namibian players they were about to confront.

Van der Merwe operated a sanctuary for orphaned animals, and once found himself jumping into an enclosure to rescue his sister’s favourite baboon from the jaws of a lion.

“I started trying to pull the baboon out of the lion’s mouth,” van der Merwe said at the time. “It didn’t work. So I hit the lion in the face with my fist, but it just closed its eyes. So I head-butted it.

“After a while I hit the lion over the head with a rock and I got the baboon out, but it died. I just wasn’t thinking. Even a tame lion can be very dangerous when it’s eating.”

“I remember the build up because there was being named captain and then the other thing was during the week there were all the stories about their back rower wrestling a lion,” Whitaker told The Roar. “We were going far out, this could be anything.”

Coach Eddie Jones rested regular captain George Gregan and a host of other starters but Namibia’s Kiwi coach Dave Waterson also fielded a second string side in an effort to have better results in their other pool matches.

Waterston didn’t wrestle lions but he didn’t mind a stoush – alienating some of his players before arrival for the tournament, and then upsetting the World Cup organisers after defeat by Ireland when he said “if you are a ref and you want the big appointments, you have to lick the backside of some of the top nations.

“At the end of the day, somebody has to speak out. I stand by what I said. I’m not going to say something and then say I was misquoted,” he said.

Waterston quit coaching after the tournament and was barely heard from again.

Whitaker, now an assistant coach at the Waratahs, recalls the game as a proud moment for him, leading out his country.

His wife flew down to mark the occasion but had to hurry back to the hotel in the first half because their infant kids were giving the babysitter some grief.

Although clear favourites, he recalls some anxiety. “It was just that responsibility,” said Whitaker. “I didn’t want to be that bloke that captained the Wallabies to a loss to Namibia.  All the things you shouldn’t be thinking of.”

It didn’t take long for Australia to get cracking.

I was in the Bradman Stand for that game and tell Whitaker I didn’t see much of the game. “Because you were having a few beers?” he asks.

The truth was that, working for The Associated Press in a time before official online match centres meant I spent all game scribbling the names of the scorers in my notebook. Every time I looked up, there was another name to write down.

“It was such a nice day, dry track, everything you could hope for a fast game and it suited our game and the boys were on fire,” says Whitaker. “It was  just one of those days where the boys wanted to play footy and were excited to be able to get an opportunity.”

It was a massacre. “It didn’t feel like a massacre,” Whitaker says.

“I’ve been on the end of a couple of those towellings as well. It’s pretty tough, once it’s going against you it’s pretty hard to stop the flow.

“I was with the Waratahs when we lost 96-19 to the Crusaders. Just standing behind the posts thinking we can’t stop the flow. I imagine that’s what it would have felt like for Namibia.”

The Aussies had no sense of taking it easy on their outmatched opponents, ripping into them like a lion into a baboon.

“That’s something that the All Blacks did when they used to play against the developing sides – stick to their structures and put them to the sword.

“We didn’t go with Harlem Globetrotters type of footy. We stuck to the game plan and played some really good footy. One of the pleasing things about that game is we went on with it.”

He felt the Namibians were shell shocked by the end, but the pain was eased in the most rugby way imaginable.

“After the game we got together for a beer and a chat,” Whitaker says. “That’s what’s beautiful about rugby, a chat and a beer no matter what the result.”