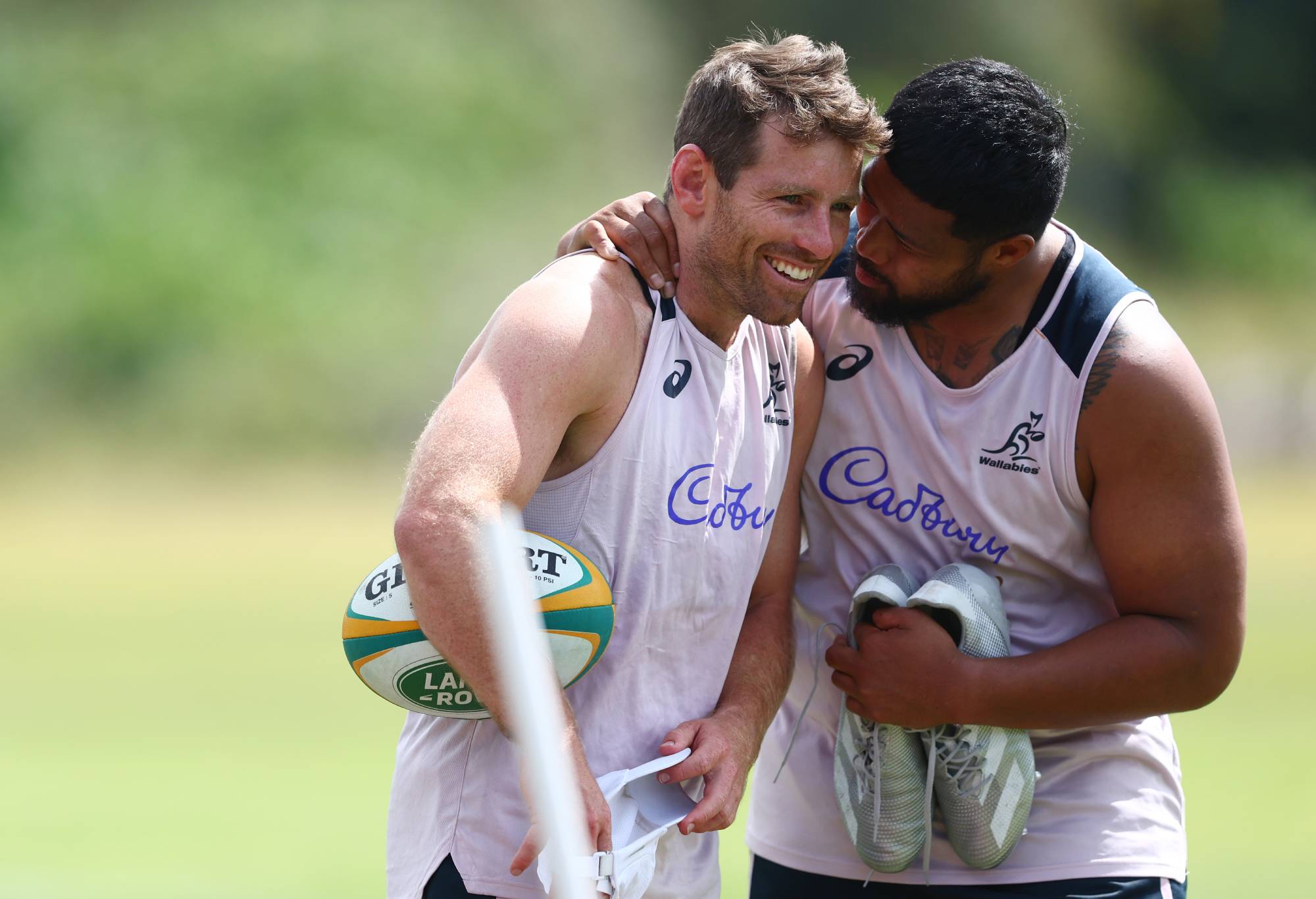 Wallabies coach Dave Rennie named eight changes for the Bledisloe Cup opener against New Zealand in Melbourne on Thursday and has backed Bernard Foley to make an impact in his first Test in three years.

Rennie explained his decision to bring in Foley and partner him with Jake Gordon in the halves, and why he relegated Nic White to the bench.

The Wallabies have been visited by key members of the last Australian team to lift the Cup – back in 2002 – as they try to find any possible edge in the battle against the All Blacks, who named a powerful outfit on Tuesday.

The All Blacks and Australia have struggled for consistency this season but the Kiwis roared into life with a 53-3 win over Argentina.

“We’re confident we can knock over anyone, but we’ve got to play at our best and force the All Blacks to be below their best.”

Rennie said at least four changes were forced on him, with Noah Lolesio and Hunter Paisami unable to recover in time from head knocks. Taniela Tupou misses out with the calf injury that prevented him from coming on in Sydney against South Africa, while Rory Arnold left the team to get established in Japan.

“That’s the thing around playing a Test on Thursday – it was a couple of fewer days for Hunter and Noah to recover from head knocks and so they’re both out,” Rennie said… “others we’ve made changes based on form and quality performances off the bench.”

He said Lolesio and Paisami would have been in contention had the match been played on Saturday instead of two days earlier.

“We had to rule them out last Friday. Because once they got past six days still with symptoms that’s it,” said Rennie. “[A Saturday Test] would have given them until Monday to make a decision around them.”

He said he was confident he might get Tupou back for the return match on September 24 in Auckland.

On the return of Foley

“Noah’s no good and we would have liked to stick with him and get a bit of continuity,” Rennie admitted. “But it’s fantastic having Bernard as an option. He’s done really well, got his head around things quickly. He was excellent last week around driving the opposition stuff and he has fit in really well – he’s an experienced voice. It’s been a good transition and he’s ready to go.”

Rennie said he was hopeful of a similar impact to what Quade Cooper provided against South Africa 12 months ago.

“It’s a pretty similar situation because you remember Quade came in and watched all the All Black Tests from the stands before he got his opportunity against the South Africans,” Rennie said.

“Bernard has been able to do the same sort of thing. Get in the mix, get his head around it and contribute big time. They’re very similar characters – . impressive, fantastic work ethic, massive contribution off the field around meetings and very strong tactical understanding.

“It has been great having him in and look forward to seeing him put that on the park on Thursday.”

On why he went with Gordon over White

Nic White copped a lot of criticism for his kicking game in particular against the Springboks.

“I think Whitey wasn’t at his best last week,” said Rennie. “He’s started every Test this year and had a massive load. I thought Jake was excellent off the bench last week, so he gets a deserved chance to start.”

On the demotion of Fraser McReight at No.7

Rennie has long been a fan of using Pete Samu off the bench but the Brumbies backrower gets a rare start with McReight on the pine.

“It has a bit to do with collisions,” said Rennie. “Fraser has been excellent, especially from a continuity point of view. And the two Tests where we’ve gone forward he’s played a big hand – but maybe not the same impact defensively and in the contact areas where we’ve struggled.

“Pete Samu, we’ve toyed with starting him a number of times. He’s been excellent for us off the bench and delivers every time and so we’ve got Fraser to bring energy and hopefully get his hands on the pill late in the fixture.”

On the All Blacks team

Captain Sam Cane will lead the New Zealanders side in a loose forward trio which has undergone forced changes for Thursday’s Test. Scott Barrett was been selected at blindside flanker, while Hoskins Sotutu is set to feature at number eight with Ardie Savea on personal leave.

Barrett’s move to the side of the scrum sees Brodie Retallick brought back into the run-on side where he will re-join long-time second row partner Samuel Whitelock.

“That’s what we predicted,” said Rennie.

“With Brodie Retallick back in the mix, and Scott Barrett has been a big performer for them. It gives them a powerful line out, especially a defensive line out. He’s a good player, Scott Barrett, and equally adept at six or lock. Hoskins is like for like with Ardie Savea. There’s plenty of depth on that team.”

Rennie said the Wallabies had undergone another intense review after losing in Sydney.

“There a number of things,” he said of the training focus.

“We lost the collisions on both sides of the ball. So we weren’t able to slow down their ball or steal much. We weren’t able to get a lot of go forward and quick ball, struggled to kick where we wanted to kick, we kicked out a lot and it slowed the game down and gave them a chance to get their maul going.

“We defended their maul really well. Our scrum and lineout were pretty solid, which is key against a team Iike South Africa but you’ve got to dominate the collision area to give yourself a chance.


All Blacks Bledisloe Cup team: Changes to pack with Sotutu and Retallick called up to rattle Wallabies


Tweak the bench: Learn to love fatigue again and the game will be better off


The World Cup done and dusted, summing up the Aussie sevens season

“If we got down their end we always felt we could put them under a bit of heat but we spent a lot of time at the wrong end of the field without the ball or losing collisions at key times. So nothing changes this week. They are all key.”

He added: “The All Blacks definitely kicked a lot more last week. I think that’s Joe Schmidt’s influence. They carried a lot more off nine. And were a lot more direct at earning the right to play the width. We expect something similar this weekend.”

He said the class of 2002 stressed “accountability,” “and how tough they were on each other and the high expectations around how they trained and how they played.

“They spoke about how maybe they were a little bit inconsistent but were able to get a similar side on the field. They ended up with a lot of players of world class standard.

“They were able to play a game that was high skill, high tempo. It was a very good side around the late 90s early 2000s. It was good to have them and share how they felt as the last ones to win the Bledisloe Cup. What we know is against the All Blacks you turn it over or kick poorly at your peril. So that’s been a focus for us.”

Wallabies team: Foley returns at No.10 as Rennie hopes for a Quade-like impact in Bledisloe opener
ANALYSIS: The biggest challenge facing Dave Rennie if he’s to avoid another Bledisloe blow
Go to mobile version