Coach’s Corner: Why Foketi is serious contender after Samu blow, which No.10 gives ABs best shot to beat Boks 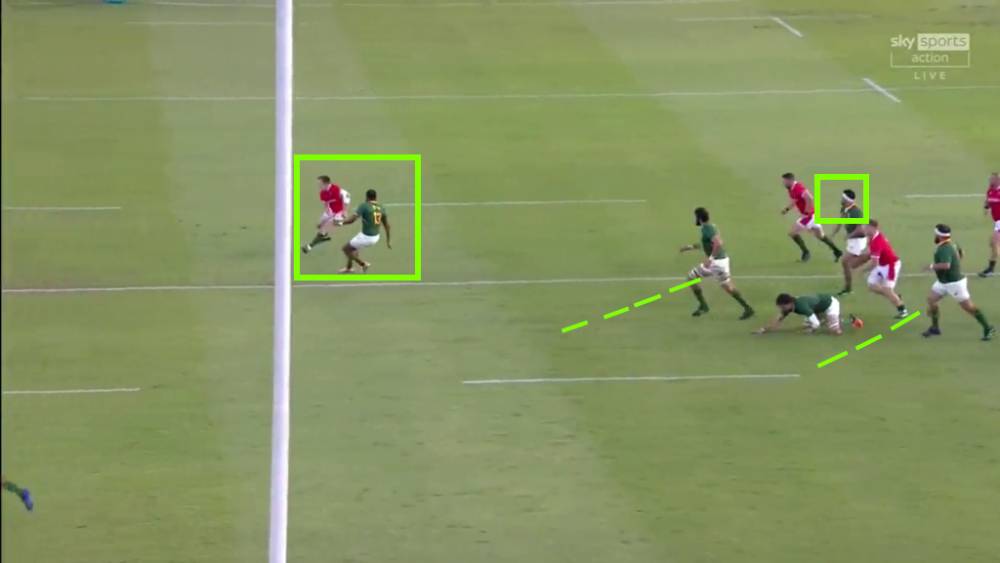 With no matches over the last couple of weekends, I’ve taken the liberty of using the ‘Coach’s Corner’ format to bring some questions of interest together in one article.

Two main areas have emerged in the aftermath of the four July series, which were all so closely contested across the Southern Hemisphere. The first query orbits around the way forward for the All Blacks on their mini-tour of South Africa, which forms the first third of The Rugby Championship.

The impression abides that the NZRFU has merely kicked the can further down the road, by backing head honcho Ian Foster and sacking his assistants John Plumtree and Brad Mooar. Probably, defence coach Scott McLeod deserved to be in the firing line first. Moreover, if ‘Fozzy’ loses both matches in the Republic then the union will be facing the same questions about his role as before, and it will be back to square one.

The Roar’s own Highlander wrote an acerbic piece in midweek, putting his finger on the main problem which has afflicted New Zealand rugby ever since Dan Carter’s retirement – the absence of a settled partner for Aaron Smith at number 10:

Richie Mo’unga has not only the game management and distribution abilities which should have been the go-to for the Ireland series but owns all the kicking requirements for pinning back a South African side that will box kick, and bomb/chase every time you allow them half-decent field position…

Even in the limited late minutes he got against Ireland, Mo’unga displayed the speed of distribution from hand which got a disjointed backline moving forward, and showed why the Crusaders’ wingers and fullback all tied the Super Rugby try scoring statistics with 10 each.

The choice for the past three or four years has been a straightforward one, between the Blues’ Beauden Barrett and the Crusaders’ Richie Mo’unga. Barrett has freakish footballing and athletic talent, but Mo’unga fits the positional requirements. Which of the pair would have given Johnny Sexton a better run for his money in the recent July series? Who would have moved his team around the field more definitively by the kick or pass?

The answer in Highlander’s forum was pretty clear-cut:

He [Mo’unga] brings more variety than Beauden Barrett who has become predictable, and his kicking has been average at best for a while now.

At half-time during the first Test, the Sky ‘choir’ [studio analysts] jumped firmly on to the Beaudy-wagon, waxing lyrical about how he was “running the cutter”, despite the fact he had barely positioned himself at pivot except for when he was kicking the ball away.

Given that Fozzy could be burning on a short time-fuse, I want to look at the issue more concretely. Let’s ask the question: which first five-eighth would suit the game needed to beat the Springboks?

The recent series against Wales provided ample proof that you need a number 10 who can distribute with consistent length and accuracy, off either hand, in order to make the most of the opportunities out wide against the compressed, suffocating defensive pattern South Africa employs:

Look how the Bokke defend after losing one of their own lineout throws. Instead of trying to buy time to regroup, they are still shooting off the line and trying to shut down the play in midfield. Their number 13, Lukhanyo Am is actually defending on the Wales number 12 Nick Tompkins:

If they cannot cut off the play, everyone runs for the corner in the scramble like tumbleweed across a prairie. In this instance the Welsh backline passing from left-to-right is crisp, and good enough to preserve space for their outside burner Louis Rees Zammit, and LRZ is quick enough to take the ball in.

What does this mean for the All Blacks? Richie Mo’unga stays squarer for longer at the line than Beauden Barrett and passes much better off his left hand. Add Jack Goodhue (another natural left hander) at centre and Will Jordan’s burning speed on the wing, and you have filled some of the essential pieces of the puzzle.

The space out wide was there all series for the men in red:

It’s not just that the wing is unmarked on the cross-kick. The Boks are so compressed in midfield (Jesse Kriel replaced Am at number 13 for the second Test at Bloemfontein) that the second man in support (Liam Williams) arrives quicker for Wales than Kriel can fill the space for the Bokke. Now, imagine Beauden Barrett in Williams’ position when he receives the ball.

Wales escaped twice in the space of two phases in the opposite 15 metre channels on their way to another fine try in the third Test:

The score arrived on 12th phase:

The defence of the Springbok back three was ill-disciplined to the point of chaotic throughout the series, and Lucky Am dips so far inside with his initial move that he cannot get back to the corner in time to help. Sam Cane would look far better on the end of that last pass than he did for most of the series against Ireland!

New Zealand would still need a number 12 to connect Mo’unga and Goodhue, and they would have a choice between David Havili, who played so well in the Super Rugby Pacific final in the company of his club colleagues – or Jordie Barrett, if his brother starts at the back. In either case, the All Blacks would be able to hurt South Africa when they had possession of the ball.

The second set of questions revolved around new talent thrown up by the recent Pacific Nations Cup (in which the revived Australia ‘A’ team played a part), and who should play at inside centre after the doomed appearance of Samu Kerevi at the Commonwealth Games:

Still can’t get my head around Kerevi being released for the Commonwealth Games.

Taking Kerevi’s presence out of the backline changes the threat to the defender, and the best of the Wallabies over the last 18 months has all been when Kerevi was in the team. Running the same patterns with a less threatening presence at 12 will fail again.

Even though the Pacific Nations Cup would not yet qualify as a top-drawer international competition based on the amount of ball-in-play time – around 29 minutes per game, compared to 36 minutes in the Six Nations – there were a number of promising shoots of growth for the Wallabies.

Seru Uru led the ‘A’ lineout well and was never less than completely involved, while Langi Gleeson did a more than passable impersonation of Bobby Valetini at the back of the scrum. Fraser McReight was probably the outstanding number 7 in the tournament and led the field in breakdown takeaways.

Behind the scrum, Waratahs number 12 Lalakai Foketi staked his claim to the number 12 jersey for the double-header against the Pumas:

I would back Foketi, he deserves a run. He certainly will not hold back, and importantly he is a great team player.

“Foketi is an exciting player for the Waratahs and Wallabies. He has really come on from last year and hoping we get to see more of him. This tour does give us the chance to develop our 12 behind Kerevi which might be very important in the World Cup.” – Olly

“Not sure about Paisami, in between Cooper and Ikitau; it didn’t really work against Japan last year; perhaps Simone or Foketi are a bit closer to the finished article, although very different from Kerevi.” – JC

Foketi himself was in no doubt about the value of an intermediate competition layered in between Super Rugby and full international level:

“You look at the teams we played – Fiji, Tonga and Samoa, especially that Fiji side – it is a huge step up from going back to play club footy, so if you’re going from that competition into the Argentina series and The Rugby Championship, I think you’d take a lot of confidence out of that. I definitely did, playing against those sides. It is a big step. I think I would be ready.

“Going into the Australia ‘A’ campaign, I didn’t know what to expect. But as soon as we got over there, it is the same environment as here. You are basically playing for Australia. The competition was massive. It is a great set-up and a great competition, and Australia ‘A’ should continue.“

The more layers Rugby Australia can afford to build into its professional rugby structure, the better. More connectivity between clubs and Super Rugby franchises (NRC or Mitre 10) means better flow between amateur and professional levels, while the establishment of a successful ‘A’ side means superior preparation for the Test arena.

Foketi represents a viable alternative to Hunter Paisami for the Wallaby number 12 jersey. He doesn’t have Hunter’s dynamism or explosiveness on either side of the ball, but he does have better touch and accuracy on the pass and arguably, a longer and more effective kicking game than the Queensland man.

He is particularly good slotting in at first receiver from set-piece, with the number 10 ghosting in behind him:

Like Mo’unga he takes the ball square to the line, fixes defenders in place and makes precise deliveries off either hand. It is not his fault that the move breaks down with Ben Donaldson and Jock Campbell on the second and third passes versus Tonga.

He also has a good feeling for the space – short or long – that the D is giving him when playing in behind at second receiver:

Quade Cooper thrived in 2021 with the presence of a solid safety valve outside him, and Lalakai Foketi fits the bill. He doesn’t have Samu Kerevi’s raw power on the carry (who does?) but he can breach the ad-line and shield Quade from having to make all of the play-making decisions on the pass.

He is also an effective defender, high and low:

While Hunter Paisami was one of the very best performers for the Wallabies subbing in at 12 for Kerevi on the end-of-year-tour, Lalakai Foketi perhaps represents a more stable partner for Quade Cooper in that 10-12 axis. It is a positive choice for Dave Rennie to make.

Thanks to all who contributed a question on the forums, without even realizing it!

‘We have to change the game’: Larkham reveals RA’s back room move to ‘tweak’ rugby, promises more exciting Brumbies
Cane: NZ not far off return to top form
Go to mobile version