Coach’s corner: The big question mark over Tupou leading into Boks series and how Riche led Foster to salvation 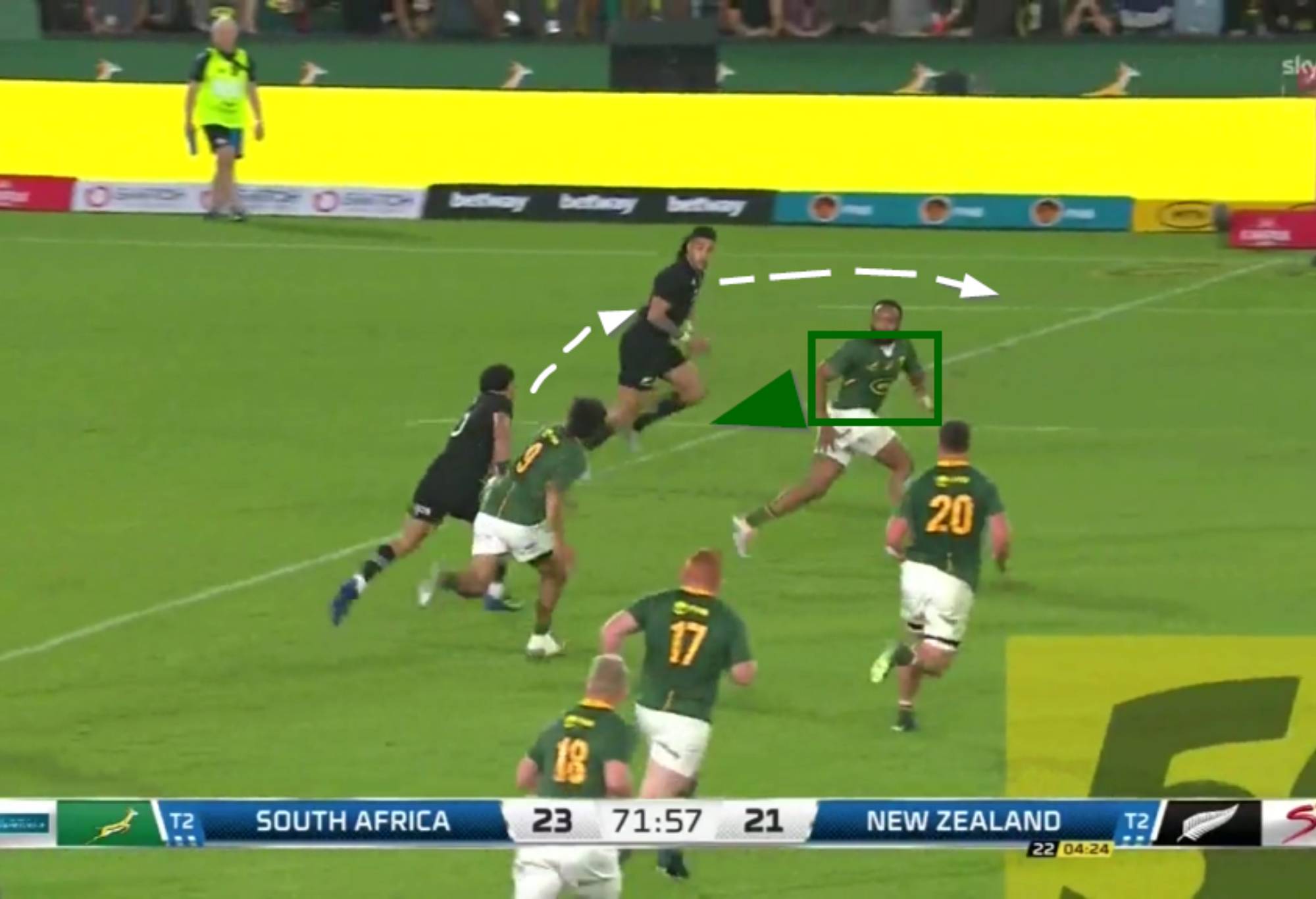 The second round of The Rugby Championship produced the kind of complete reversal last seen on the July tours. Wins for the South in round one turned into victories for the North one week later, a 40-point win for the Wallabies in Mendoza was turned on its head in San Juan.

Ian Foster also proved there is some life in the old dog yet, with an inspiring comeback win over the world champions at Ellis Park. Most of the comments in the forums centred around the extra cohesion afforded by Richie Mo’unga’s passing and kicking at number 10:

[Ian Foster] finally picks [Richie] Mo’unga, and the whole world changes. I am still looking for change in the coaching box… [Beauden] Barrett would never have won the kicking duel nor pinned the Boks back, over and over. Mo’unga’s distribution by hand tonight was absolutely best in class, Barrett simply doesn’t have that skill set.

As regular readers will know, I have been ardently campaigning for the re-selection of Richie Mo’unga at number 10 ever since the last World Cup!

One of the main points of having a good distributor in the spot is that it brings your ball-carriers into the game. In Johannesburg, New Zealand had Shannon Frizell (an upgrade at number 6) with eight runs for 44 metres, they had Samisoni Taukei’aho (a big upgrade at hooker) with 12 runs for 22 metres at the hardest of coalfaces inside. Then there was Ardie, with 13 runs for 51 metres and no less than five decisive outcomes (busts and break assists). It is not a coincidence.

An honourable word of mention must also go to Sam Whitelock, the grand old man of the pack who put in a shift for the ages. He won four turnovers at the tackle, post-tackle and lineout while taking over from Sam Cane as the Blacks’ top cleanout performer with 34 involvements on both sides of the ball – 12 more than the Kiwi captain. Add Owen Franks or Oli Jager to that mix and you would look and feel even more solid at the breakdown.

Let’s go back to Richie Mo’unga.

Mo’unga’s passing game keeps the defence guessing and opened up space out wide. For the first time this season we looked like a proper rugby team wearing down the big Bok forwards and exposing weaknesses in the defence.

Richie’s quick long passes wide are what made the Boks [retreat] and tire. His kicking for territory is top notch.

If people actually looked at what was happening and tried to understand it, they would see a difference at #10. The main thing is Foster needs to see it.

The combination of Richie Mo’unga at 10 and David Havili at 12 allowed the All Blacks to get the ball to width earlier, and with far more meaning at Ellis Park:

Richie overcalls for the ball from Scott Barrett, Havili crosskicks for Ardie, and suddenly we see the same picture Wales were able to exploit against the Boks in July. It is not a coincidence.

The quality of Mo’unga’s passing was even able to justify the selection of Rieko Ioane at number 13 (almost) by bringing him into the game on attack for the first time in five games:

Richie puts Rieko into the hole – easy carry, easy clean, lightning-quick ball from the ruck. He was also able to make silk purses out of sow’s ears after problems on the previous phase:

It is a tough first clean for Sam Cane against two Springbok defenders, but the quality of Mo’unga’s delivery off his left hand on the following play turns water into wine down the Kiwi right. See the highlight reel for the conclusion of the sequence.

There is also a chance that the presence of Richie Mo’unga at number 10 will help restore players to the spots they should be playing, like Rieko Ioane to the wing.

“How good was that run when Richie put him [Rieko] away down the left wing, his natural home.”

Give the ball to Ioane in space, the kind of space he will not get regularly at centre. And who was cleaning out over the top of him at the tackle 70 metres downfield? That’s right, Richie Mo’unga.

The foundation picture of the play looks like this:

The Springbok defender in these instances will always look in at the passer first, so the pass will beat the man, if it is accurate enough. Ioane’s long break down the left led to New Zealand’s final, decisive try of the game scored by David Havili.

From the Springbok point of view, the red card on Kurt-Lee Arendse from the first Test did them no favours at all. It is not just the foul itself, it is the reverberations it creates around the refereeing in the next game, and the match after that.

The Bok kick-chasers had to pull out of all potential collisions at the point of receipt, and they did not get rewarded for fouls committed by the Kiwi escort service either:

In the first instance, Makazole Mapimpi steps off to avoid a collision under the high ball, in the second he is clearly blocked by Havili but gets no change out of the referee Luke Pearce. Once established, perceptions are hard to dislodge, and it will take a while for the South African kick chase to return to its former levels of aggression. The officials will have a beady eye on them.

The Roar’s own Harry Jones also highlighted the flaws in Springbok patterns of selection in 2022:

“Starting front row needs to be Kitshoff-Marx-Frans and stop the games. [Joseph] Dweba was not good at all. Bok coaches being cute there. Duane [Vermeulen] at 8 with 0:00 game time ahead of Wiese, Roos, Louw makes no sense. Coaches take the loss here; players gave it all, but selections after a win should always be the same.”

The two-match series against New Zealand worked out in a similar vein to the first pair of games against Wales in July. South Africa won the first match in both cases, but overestimated their resources in a picking a team for the return and lost. There is a lesson in there about realistic player evaluations.

Across the water in Argentina, Australia contrived to beat themselves as efficiently as they were bested by the Pumas’ smart kicking tactics, highlighted in Wednesday’s article.

The 2022 tight forwards have been gouged by a series of important injuries, but many of the selections still do not pass muster. Matt Philip has been Australia’s most reliable tight forward thus far, but he was dropped for the second match with Darcy Swain preferred to him as a starter, and Nick Frost on the bench.

Swain obviously has some potential but is very far from being a mature operator at this level of the game. As the Wallaby lineout caller, he shut Rory Arnold out of the game when he should have been one of Australia’s points of strength. The Wallabies’ win ratio on own-ball dropped by 10% from Mendoza, and Arnold was not used as a defensive jumper at all, but as a lifter for Swain and Jed Holloway.

Frost is a better bet than Swain, who isn’t thinking clearly – Noodles

Darcy Swain does some rash things with ball in hand, perhaps to compensate for his lack of ball-carrying impact (five runs for three total metres over two matches against the Pumas):

The tackle is made and a ruck very obviously forms over the top of Swain, before he attempts to get up off the ground and play the ball again. The same ill-discipline was in evidence in a different form against England in July, with the red card for retaliation against Jonny Hill. It was present on defence, both during the England series, and as far back as the Bledisloe Cup back in 2021:

There is pattern of impulsive behaviour which suggests that Darcy Swain is not yet the finished article, not by a long chalk. With no scrummaging hookers left in the Wallaby squad after the injuries to Folau Fainga’a and Dave Porecki, it was left to Taniela Tupou to shore up the Australian set-piece against youthful Thomas Gallo, and surprisingly he was not up to the task on the day.

“A lot of people talk him up into the best in the world squad picture. He had Gallo against him, 23 years old, only had four Tests. Gallo had the better of him. Not just in open play where he made him miss two tackles, but also at scrum time. I felt like Tupou turned on and off.”

“Gallo was far and away the best player on the field, and comprehensively outplayed Tupou. Tupou has clearly been studied by other teams and worked out. He’s not given space to run and chopped down low early, he hasn’t been dominant in the scrum this year because everyone is watching for his angle, and his ruck attendance and work rate is poor, particularly on defence.”

Gallo was giving away around 25-30 kilos to Tupou at the scrum, but he won two penalties against the Queensland man (with none conceded) and never looked less than completely comfortable:

On the very next play after that 50/22 kick from set-piece, he rode over the top of the Tongan Thor’s tackle to score a try from short range:

As Fun Bus pointed out, “that missed tackle for one of the early tries was the definition of ‘phoning it in.’” For those who are unaware of Gallo’s explosiveness on the carry, I offer this instance from the URC:

“After his injury he blew to 160 kilos, then wiped 20 kilos off before playing. It’s partly his weight, more likely his mental attitude and/or toughness that is letting himself and the team down.”

Whatever the rights or wrongs of the situation, Australia ended up with only one of their tight forwards (captain James Slipper) offering a reliable performance in San Juan, and that should never have been the case after the dominant set-piece platform set in Mendoza.

With Tupou looking out of sorts, and successively outplayed by two very dynamic opponents in Gallo and Ellis Genge since July; with Rory Arnold criminally under-used, and Matt Philip criminally under-rated; and with Darcy Swain’s decision-making leaving so much to be desired, there is a lot of work to be done in the tight forwards before the Springboks arrive in Adelaide.

Thanks for all of the interesting debates arising from events at the weekend. Buenos Dias!