The Crusaders will roll out their strongest line-up of the season when they take on the Brumbies in Canberra on Friday evening. Coach Scott Robertson has made five personnel changes to the line-up that dismantled the Western Force in Perth last weekend, bringing a cluster of key All Blacks into the starting XV for the mammoth trans-Tasman clash.

The Brumbies and Crusaders currently sit second and third on the standings table with three rounds left in the DHL Super Rugby Pacific regular season, and both sides are looking to secure home play-off fixtures in the coming weeks.

How to watch Crusaders vs Brumbies Super Rugby 2022 , When does it start, Live streams and schedule

Here’s how to watch the 2022 Crusaders vs Brumbies broadcast on FloRugby. The 2022 Crusaders vs Brumbies broadcast starts on May 13, 2022 and runs until May 14, 2022. Stream or cast from your desktop, mobile or TV. Now available on Roku, Fire TV, Chromecast and Apple TV. Don’t forget to download the FloSports app on iOS or Android! If you can’t watch live, catch up with the replays! Video footage from the event will be archived and stored in a video library for FloRugby subscribers to watch for the duration of their subscription.

Perth, Canberra and Christchurch – the Crusaders are spread far and wide as they prepare for Friday’s crunch match against the Brumbies.

A few days after three new caps increased the number of players used this season to 45, the juggling of the roster has continued for a variety of reasons.

While captain Scott Barrett (suspension) and vice-captain Codie Taylor (rest) have joined the team in Australia’s capital, flanker Sione Havili Talitui has returned home for a scan on the hamstring he hurt early in last week’s demolition job of the Force.

Four players – Oli Jager, Mitchell Drummond, Zach Gallagher and Dominic Gardiner – have remained in Perth after contracting Covid-19 last week, and won’t be allowed to return to New Zealand until they return negative pre-departure tests, as per the country’s border rules.

TRY | George Bell celebrates his debut in style with his first 5 points of Super Rugby. 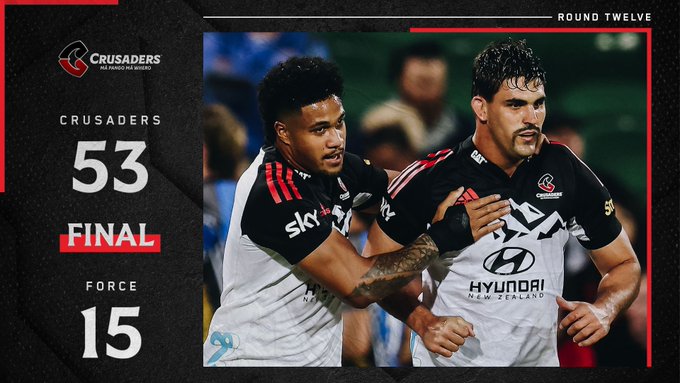