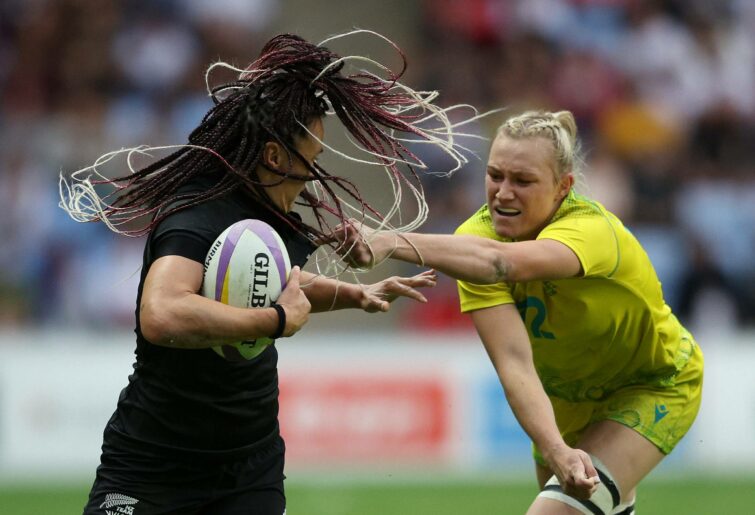 The best way to describe the Australian rugby sevens teams in Birmingham is with the Hoodoo Gurus song Bittersweet.

There was the sweetness of the women’s gold and the bitterness associated with the men missing out on a medal.

It was a mighty enjoyable tournament, and while there were some blowout scores, there were also some epic games. No doubt at the very least all the players had a great time. On social media it seemed that on the men’s side Uganda had become everyone’s second team.

It was a bumpy ride for the Aussie sevens men and women, although the men endured way more of the bumps.

The pools generally went to plan in both the men and women’s tournaments. On the women’s side the big three of New Zealand, Australia and Fiji made the semis as expected. The only spanner in the works was that the Fijiana beat Australia in the pool stage, and as a result Australia had to face the Kiwis in the semi-final and not the final.

On the men’s side all four of the big dogs made the semi-finals – South Africa, New Zealand, Australia and Fiji.

The Australian women hit the ground running by comfortably powering past South Africa and Scotland. They played with the speed and skill we have come to expect. It’s always hard having two pretty easy games. What do they show? In reality probably not a lot. It just provides an opportunity blow away the cobwebs.

It all came to a shuddering halt when they faced the Fijiana. Just like at the Olympics, once they get their offloading going, it is nearly impossible to rein them in. The key is to keep possession. Unfortunately the Aussies did not get the kick-off right and didn’t get the start. Fijiana scored first and then scored again.

The starting team selection seemed odd, with no Alysia Lefau-Fakaosilea, Sharni Williams, Demi Hayes or Lily Dick. They all bring physicality. During the game all but Dick got on the field, by which time it was too late. Despite a minor late fightback, the Fijiana came away with a 19-12 victory.

The New Zealand semi-final was an absolute cracker, 17-12 to Australia. While the Kiwis took the lead into half-time, it did seem the Australians had most of the possession. This was a surprise considering how poor their kick-off restarts were. But the Australian defence, now a trademark, was outstanding as was their handling. There was a change to the starting line-up to include Williams and Lefau-Fakaosilea.

Lefau-Fakaosilea is a real impact player, and early on she made one of her characteristic offloads that led to a powerful run by Williams with Maddison Levi scoring. Maddi Levi is pretty special, scoring three tries. Teagan Levi stepped up again, setting up a try for her sister and making a crucial tackle on Portia Woodman.

The ‘after full time’ play by the Aussies was outstanding. Down to six players, an attacking scrum with a Kiwi feed Faith Nathan flew out of the line, made a ball and all tackle to shut down the overlap, Madison Ashby cleaned out like a demon, Australia won the ball back, there was a knock on – full-time whistle blown, Australia win, commence vast amounts of player emotion.

In the gold medal final, despite having lost to the Fijiana in the pool rounds, there was a feeling that if Australia got off to a good start, they would have too much composure on the big stage.

In saying that, it did not go to plan. The kick-off did not go ten metres. As result, the Fijiana had first use of the ball, but as luck would have it, they almost immediately dropped it. From there on Australia was in control, playing a fast and furious brand of rugby with great handling skills. They were soon out to a 17-nil lead.

With that sort of advantage and combined with their tough defence, even with a couple of late Fijiana tries, Australia would not get run down. Australia took out the final 22-12

The win by Australia was well deserved and reflected the success they had on the World Series. What is seriously astonishing is that eight of the 13 payers are 22 years of age or under. The future looks good.

The men did what the men do. Apart from an easy first pool game win against Jamaica they had to dig deep and show bucketloads of effort, grit and determination. The bottom line is they are not one of the glamorous sides like Fiji, South Africa and New Zealand, but they are a very, very good side.

It is worth reiterating that the men’s program only has seven Rugby AU full-time contracted players, so it’s no longer a fully professional program.

The men had opportunities, but an error here, a mistake there plus their discipline let them down.

The first game was a simple run over Jamaica, with Samu Kerevi having a field day, scoring three tries and setting up two more. Then we woke up Saturday morning and saw the men had drawn – yes, drawn – with Uganda. In simple terms Australia’s discipline was very poor, including two yellow cards.

Then Australia took on Kenya. Again discipline was a problem, with Mark Nawaqanitawase getting a yellow card in the first minute and Nathan Lawson getting one too for a dumb tackle. Then to top it off Kerevi, while making a big run, got injured. In the end Australia hung in there to win 7-5.

So you could say they were not looking too flash going into the finals, and Kerevi did not play.

In the quarter-final they were up against Samoa, arguably the hardest of the possible quarter-final opponents. Samoa is a developing rugby sevens behemoth who are finally getting their acts together. It was a tough, scrappy game of stress, with Australia coming away with a 7-0 win.


WILL GENIA: Wallabies should have beaten England, and can win TRC, but Dave Rennie must start getting better results


‘Without peer’: What makes Simon Poidevin one of my favourite Wallabies


Tight five: What I want this TRC for the Wallabies


The Thursday Two-up: Hopes and dreams, thoughts and prayers

Up next in the semi-final was the eventual gold medal winners South Africa. Australia could not afford to make mistakes, but they did. Two errors resulted in two tries. Henry Hutchinson got a yellow card for not retreating ten metres before making a tackle right on half-time. South Africa marched up the field – try. Early in the second half an attempted chip was charged down regathered – try. South Africa’s defence just squeezed the life out of them.

The Kiwis were then never headed, getting the win 26-12 and the bronze medal. But Henry Paterson did score a great acrobatic try in the last 30 seconds, with 95 per cent of his body tackled over the sideline.

As outlined in the preview to the Commonwealth Games, there were four big gun teams, and with only three medals, one team was going to finish up very disappointed. That disappointed team was Australia. Still coach John Manenti has done a terrific job with this squad. Unfortunately there is no time to ponder the what-ifs. They now need to brush it off, rest up and prepare for the LA World Series leg later in the month and then the World Cup.

Bittersweet it may have been, it was still a terrific three days of rugby, especially with a big crowd on finals day to give the players a memorable occasion.

‘Without peer’: What makes Simon Poidevin one of my favourite Wallabies
What time do the Wallabies play Argentina and how do you watch it
Go to mobile version