Australia overcame an early scare to run away with their first game of the Rugby League World Cup, Storm playmakers Harry Grant and Cameron Munster leading the way as they defeated a brave but ill-disciplined Fiji 42-8 in an eight-try feast before a crowd of 13,366 at Headingley Stadium in Leeds. 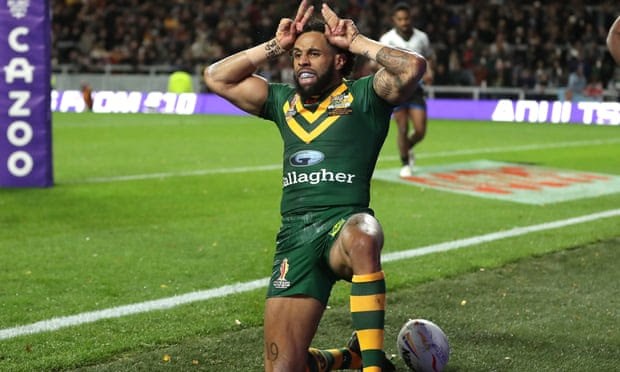 The sucker-punch start made Australia lost shape. Fiji had made the most of their one minute in attack, while Australia failed to convert from 14 minutes with the ball. But after some strong Jake Trbojevic charges, Cameron Murray and Daly Cherry-Evans combined, pivoting at pace as they sank into the line. It created the reverse angle for Jeremiah Nanai, slicing back inside to go in under the posts in the 15th minute.

Australia settled and a Munster one-on-one steal set up Nanai for another charge, but this time the big man went just short. Fiji made big metres on their return set and were setting up for a second five-pointer until Kangaroos captain James Tedesco diffused the last-tackle bomb and Hunt shovelled a nondescript pass off the ruck.