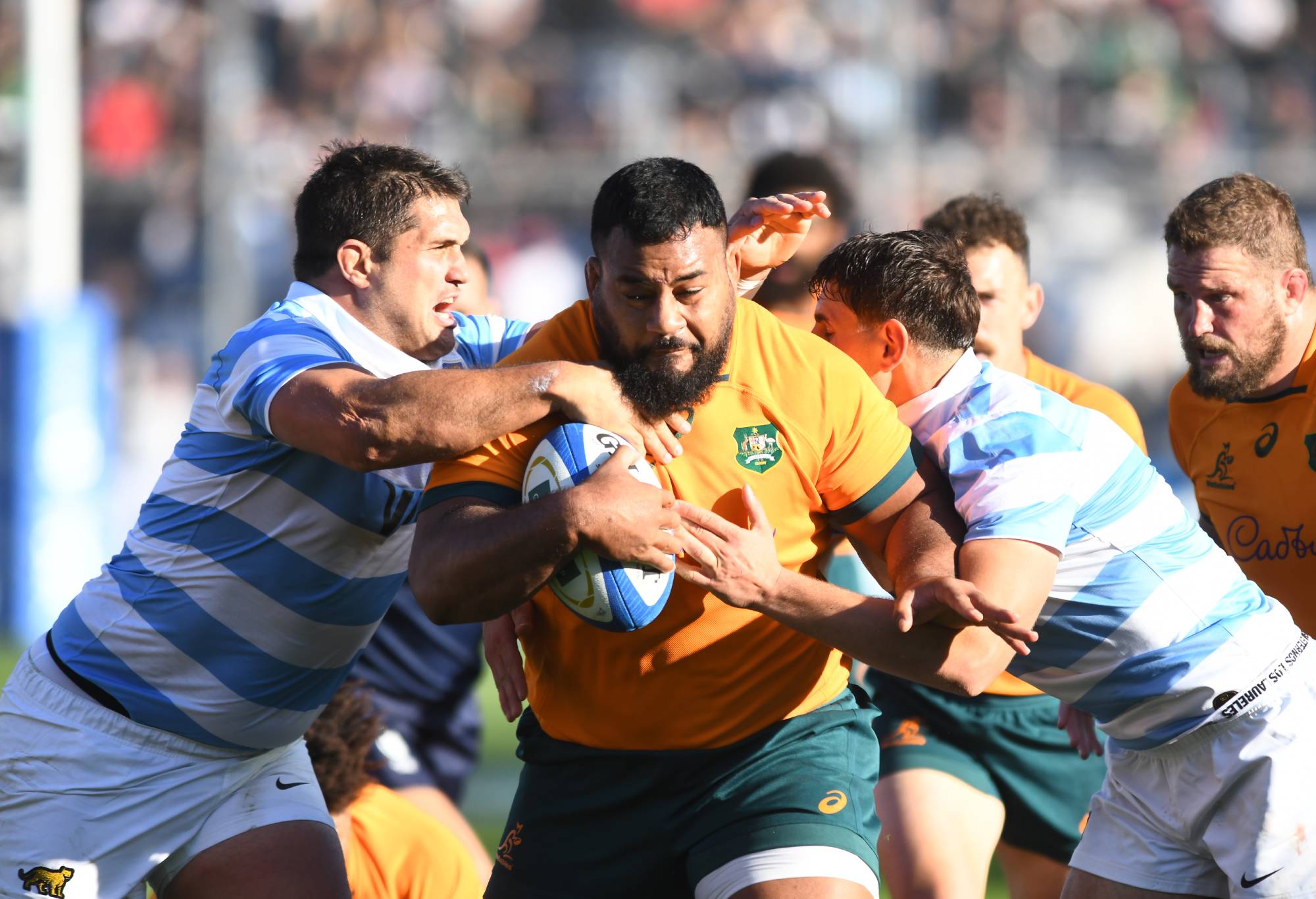 Argentina started on fire, maintained their composure and rolled Australia by a record score. Here is who struggled and who stood out for the Wallabies as the Pumas ran riot 48-17.

“That was an outright calamity,” said The Roar expert Jim Tucker on our Instant Reaction podcast.

“And very instructive on where Australia’s heading in this championship. If they thought the air raids of San Juan was something just imagine what South Africa are going to put in the sky.”

Listen here or on your podcast app of choice

Dave Rennie’s squad has been smashed by injuries and the coach acknowledged they lacked cohesion. In contrast, Argentina coach Michael Cheika changed up his game plan and went to the skies with contestable kicks. The Pumas out the ball in the air 28 times compared to 15 in the opening Test, won by Australia a week earlier.

Ian Foster might have gone into the second round of TRC as the coach under the most pressure, but it can’t be long before Rennie feels some heat. He has now lost three and won two of his opening five Tests of 2022, with nine to play.

In a way it’s lucky for Rennie that he’s far from home after such an embarrassing scoreline.

The Wallabies have opted against post-match media conferences for Australian-based reporters during the games in Argentina and that might give the Australian coach some respite from questioning, as he got away with a few mea culpas on Stan Sport.

Tucker said the opening moments – where Argentina scored through a mix up between Jordan Petaia and Tom Wright – encapsulated an Australian issue – the lack of a specialist No.15 and he felt Jock Campbell will enter the equation against the Springboks.

“The mark down is really the fullback position overall,” said Tucker. “It was being filled today by Tom Wright and this is not a knock on Tom Wright. He’s a winger playing fullback, did some good things, ran the ball from behind his own tryline, that was a good play in that situation.

“But it’s about basics. For fullbacks it’s taking every high ball that’s put in the sky you just have to be in position and be reading it five metres ahead of time and that never happened.”

Rennie is hoping for at least seven of the sidelined 17 players to return in the home Tests, and surely, one a day when few Wallabies stood up to be counted Andrew Kellaway’s stock rose as much as anyone’s.

Was there any good news?

Rob Valetini had his best game of the international season, running with intensity and setting up a try to James Slipper. Early in the second half another powerful surge should have resulted in a try to Petaia, who was stripped after crossing the tryline.

“Happily, that’s another really strong performance backing up from what he did last week, and we didn’t really see that through the England series,” said Brett McKay on the podcast.

Harry Jones, on the podcast, gave his stock rising to Marika Koroibete. As well as one long-ranger that Morgan Turinui said was the winger’s best kick in international footy, he saved a certain try with an astonishing last ditch tackle.

“I would put someone’s name down and then I would put an X through them but the only one that I’ve never really X-ed out completely was Koribete,” said Jones.

“He seemed like a one man band sometimes. Sometimes he was the only one who seemed to know the rules.”

Tucker opted for Len Ikitau as his standout Wallaby.

“Mainly because he has that composed nature for Test footy and he stayed in the fight right to the end,” Tucker said.

“He showed really nice footwork to punch through the line. And he’s that player who might only do one or two things in a Test match with footwork but they are enough to set up a try and that moment there could have got Australia back some momentum.”

Now for the bad news…

As the scoreline suggests, positives were few and far between for the Wallabies and they were behind from minute one.

Jones said it was a diabolical performance of on the road rugby and that Petaia set the tone.

“Why on earth are you running back full tilt into your fullback flipping a ball in the very first minute?” said Jones.

“Everything has to go just right. The sun’s in your eyes. The fans are wanting you to drop it – starting badly on the road is horrible.”

Fraser McReight, after an impressive game in the absence of Michael Hooper a week ago, failed to reach the same standards, giving away several penalties while Taniela Tupou continues to struggle after his long absence through Super Rugby.

Jones said TT was outplayed by Argentina’s young prop Thomas Gallo, who scored two tries including one where Tupou was directly at fault.

“A lot of people talk him up into the best in the world squad picture. He had Gallo against him, 23 years old only had four Tests,” Jones said.

“Gallo had the better of him. Not just in open play where he made him miss two tackles, but also at scrum time. I felt like Tupou turned on and off.

“When he was on he was plugged into the game but I think on the road, it’s actually better to even that out – you just don’t want to let anyone run in soft tries. You can never win with 48 against you in any scenario.

“Letting in that soft try to Gallo was horrible and I also feel like his cleans were inaccurate.”

McKay said it was the kind of performance that suggested Tupou was a better impact option and Allan Alaalatoa – missing from this match due to personal reasons – was the better option to start.

“It’s an interesting one. We vacillate on this,” Tucker responded. “Allan Alaalatoa gives you a real solid bottom line. Perhaps never those super explosive bursts through the line and the little bit of fancy handling and the try capability that Tupou has but he does offer a really consistent base more often.

“Tupou can break a game open. So it will always be an either or situation I feel and especially a tight head prop can’t play seven Tests in a row. The Wallabies will always be changing in that arrangement and I’m quite comfortable with that. But Tupou has to lift that level of consistency.”