ANALYSIS: Why the Wallabies are looking towards their tall timber 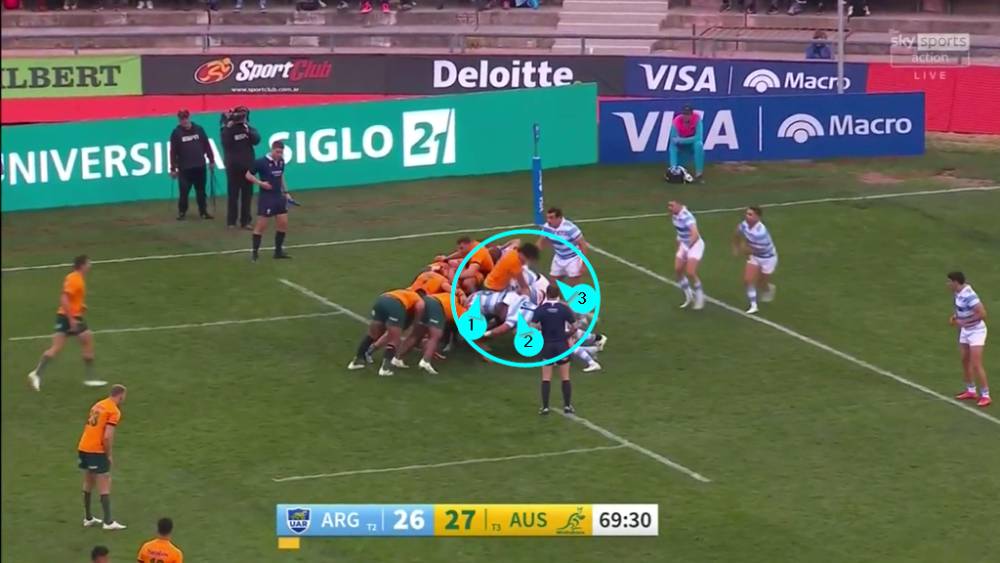 1984. The memory of the Wallaby warm-up is still as clear as that golden autumn day at the County Ground in Exeter. In the red corner, ‘Topo’ Rodriguez and Stan Pilecki locking horns at one-on-one scrums, grunting and grinding, their jerseys already patched with sweat.

In the blue, the promptings of the Ellas, criss-crossing and popping passes at dizzying speed. Little shrieks of delight flying up into the sky, pin-balling on switch and double-switch. A sleight of hand with leather never once touching turf, a magical léger-de-main.

On the 22, and oblivious to it all – Michael Lynagh, puffing out tiny clouds of frozen air into the blue; kicking for the poles, practicing mindfulness.

My own eye was steadily drawn to three giraffes of the prairie, cantering gently towards the end where we stood. I chuckled, thinking of the doyen of telly commentators, Bill McLaren. He would have called them the three skyscrapers – the two Steve’s, Cutler and Williams, and Bill Campbell.

When the Wallaby lineout practice began in earnest, the atmosphere hardened tangibly, and it became a true glimpse of the game’s future, more than 30 years later: a giant hooker of over 115 kilos (Tom Lawton) throwing towards multiple two-metre targets. We gasped as they rose into the Devon heaven: the likes of Campbell and Cutler and Williams could reach heights others could only dream about.

Dave Rennie’s Wallabies now have the opportunity to bring history up to date, and build the Australian lineout into something special, almost 50 years after those trendsetters coached by the redoubtable Alec Evans.

On the evidence of the weekend game in Mendoza, he may well have unearthed the tight, hard-nosed number 6 he needs in the shape of Waratahs ‘tweener’ Jed Holloway. He had his two two-metre second rows – Darcy Swain and Matt Philip – and he can get even bigger and better in in that area with the introduction of Rory Arnold (2.08m) and Izack Rodda (2.02m), plus promising young tyro Nick Frost riding the pine at 2.06m. That group would give even the Springboks pause to prod their beards.

It is to the credit of forwards coach Dan McKellar that the Wallaby lineout has learned so many of the harsh lessons of the England series in July in such a short time frame. I outlined them here . There is often a big discrepancy between raw ‘first touch’ lineout stats and the deeper dive into the proportion of meaningful, quality ball produced.

England scored 16 of their first 19 points from lineout drives in the second Test at the Suncorp, and they drew a yellow card on their opponents while stuffing two of Australia’s three close-range attempts from the same platform. I advocated the selection of Jed Holloway at number 6 and a 6/2 bench split before the series ever started, and all of it worked out very nicely indeed for Dan McKellar and his men in Mendoza.

The raw stats say that both Australia and Argentina won over 90% of first touch at lineout, but the proportion of usable ball was very different: 10 out of 15, or 66% for the Pumas; 16 out of 17, or 94% for the Wallabies. Australia scored four tries directly from lineout, at an outstanding ratio of 3.17 points per visit to the red zone. It was impressive stuff, and just about the only piece of concrete cohesion in a match marred by 32 parps of the referee’s whistle.

Let’s look at some examples of how the Australian lineout has improved its attacking efficiency. Here is a typical scenario from the England series:

The ball is won at the front, and Samu Kerevi is static when receiving the ball, barely beyond the 15m line before he is engulfed by two England forwards. Although Bobby Valetini has a shot at Marcus Smith on the following phase, Marcus already has two bodyguards in place (Courtney Lawes inside, Owen Farrell outside) and Faz is able to rip the ball away from Valetini’s grasp.

Compare that with a more streamlined use of the Wallaby number 8 in Mendoza:

In the first example, the ball is won from the middle of the line, so Bobby Valetini is a bit wider then Kerevi when he receives the ball. It is forward on forward and the Australian number 8 has already reached the 5m line when he sets the ruck, with all of the Wallaby backs still available on the next phase.

In the second instance, the ball is won towards the back by Nick Frost, and Hunter Paisami is able to make the second pass to Valetini. That allows him to target the Pumas 10 and 12 in midfield, and set up an attack between Reece Hodge and Marika Koroibete versus Argentine forwards on the second phase of attack.

Australia’s first try of the game also derived from a positive driving lineout near the Argentine goal-line:

It is not great defence. With the last two Argentine defenders staying out with Tom Wright and Marika Koroibete out of shot on the Wallaby left, defence coach David Kidwell’s system breaks down in the middle, where you simply cannot afford to give a ball-player with Quade Cooper’s finesse a two-on-one against your outside centre:

At the maul, Dan McKellar will be happy that he has made some definite progress towards the ambitious targets he set before the July series:

“We’re trying to develop a mindset here of having the best maul in the world. That takes time, there are five groups of players that come from different franchises and they all do it differently, so the buy-in and thirst for it has been obvious from my end.”

“It’s just about mauling better, isn’t it? The reality is in Test match rugby games are often tight, so when the opportunity comes to take points, you generally take the points – whereas in Super Rugby bonus points over the course of the season, if you’re scoring tries, [are more] important.

“Opportunities in Test rugby are less, but when we do take them, we’ve got to be better. Mauling’s one part of it, there’s a whole lot to being a good forward pack, but it’s an area that we’ve identified that can certainly make some shifts.”

The groundwork was put in during the England series, even if the results were fitful against strong forward opponents:

Matt Philip peels away three England forwards on the outside corner of the drive and takes them out of play, and Folau Fainga’a picks exactly the right moment to break off from the maul and go for the line himself. It is an area of judgement where the Brumbies hooker is indisputably world-class:

This was Australia’s fourth close-range lineout try of the game. In this case Darcy Swain cannot do the same job as Matt Philip because he has been encircled and isolated by no fewer than three Pumas defenders on the right side of the drive:

But Fainga’a is smart enough to recognise that the over-commitment has left Argentina short of a guard on the open-side of the maul, and he picks the right moment to break away and exploit the vacant space.

The Wallabies had already made another two scores from previous penalty kicks to the corner, to bring themselves back into the game in the second period:

In this instance, the Pumas are still busy over-defending Swain on the outside corner of the maul, but the ‘peel-away’ occurs on the opposite side via Matt Philip, who is able to drag three Argentine forwards away from the point-of-contact and create a road for the receiver (Jed Holloway) and ‘his plus one’ (Fraser McReight) to trundle forward almost unopposed to the line:

14 minutes later, the Wallabies maul earned itself a penalty try when referee Mike Adamson finally lost patience after an Argentine collapse with the score imminent:

The ironic symmetry from England series could not have been lost on Dan McKellar, because Pumas lineout captain Matías Alemmano was yellow-carded in a double whammy with the automatic seven pointer. That is exactly what cost Australia control of the decisive second Test at the Suncorp against the auld enemy.

Ex-Wallaby head honcho Michael Cheika must already be bitterly regretting the decision to rest his outstanding lineout forward Guido Petti for the two-Test mini-series against Australia. What would he not give for Petti’s calling ability on the Pumas’ own ball, and his spring-heeled ability to organize an aggressive defensive effort against the throw on the goal-line?

In Petti’s absence, Argentina opted to defend the Wallaby drive on the ground rather than in the air, and for the most part they failed at their task. This was important, because it was the only part of the game Australia could rely on, looking down the barrel at a four-to-one penalty count against them early in the second half.

32 penalties in the game made for staccato rather than symphonic watching, and both sides will be hoping for a far more fluid and sympathetic performance from Englishman Karl Dickson in San Juan than they got from Mike Adamson in Mendoza.

Make no mistake, Australia has something to build on after losing a series they should have won against England. Reece Hodge once again proved his critics wrong, once again demonstrating that a truly international jack-of-all-trades can be just as valuable a commodity as a master of one spot. He contributed substantially and made the 6/2 bench split work after Quade Cooper limped off in the second half.

The extra bench forward overwhelmed Argentina on the carry in the final quarter as surely as the Wallaby lineout came out on top at the Estadio Malvinas Argentinas over the piece. There is a real chance for Dan McKellar to build an imposing core of very big men with the return of Rory Arnold and Izack Rodda in view, to set alongside the promise shown by Nick Frost and Jed Holloway. The salad days of 1984 may yet roll around again.