ANALYSIS: ‘Improves everyone around him’: What Reece Hodge did that makes him undroppable at 15 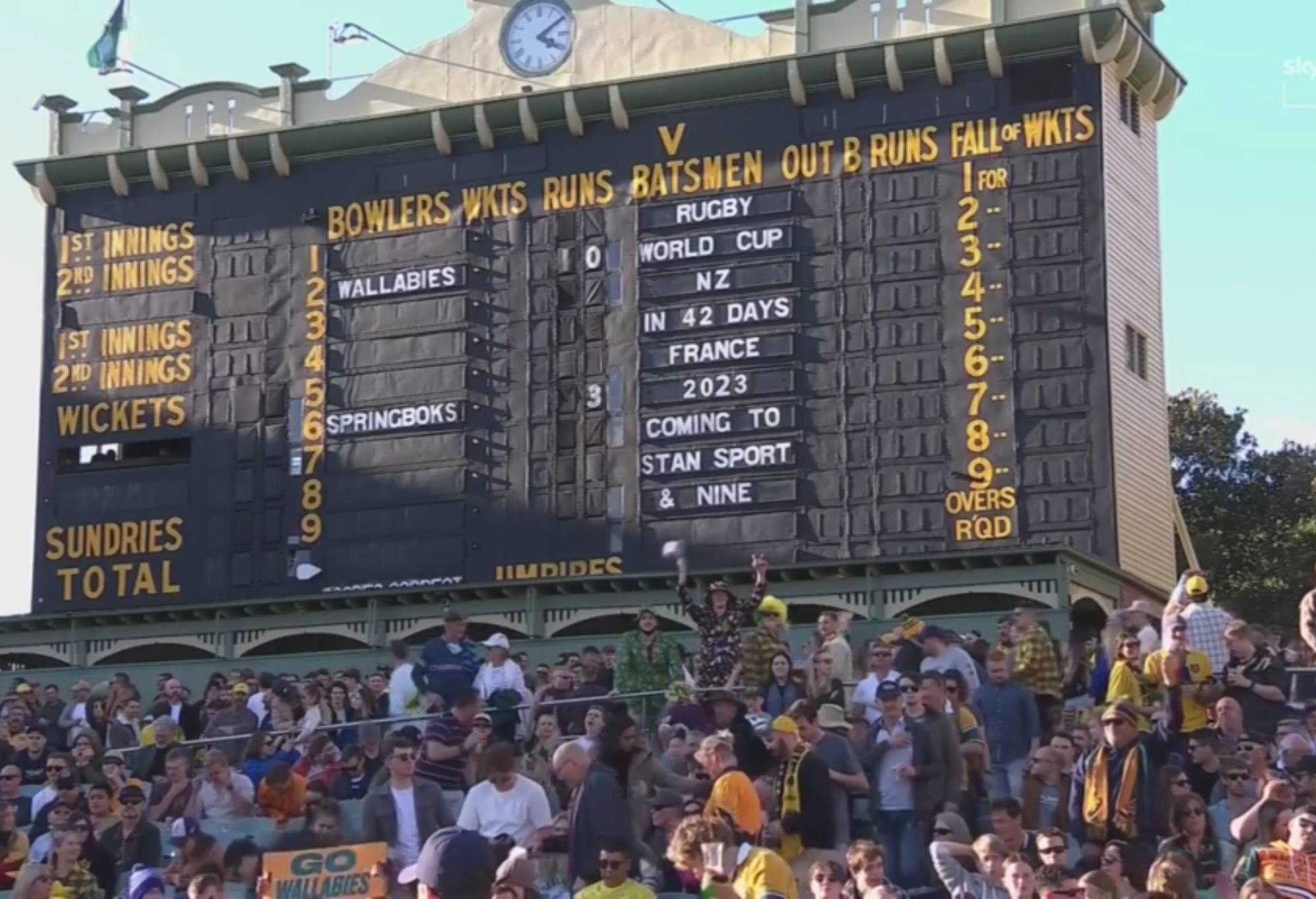 At half-time in the match between the Wallabies and the Springboks at the Adelaide Oval, the camera shot rose slowly until the venerable cricket scoreboard was fully visible on the Hill, against the background of a clear blue sky. For a few nostalgic moments, it lingered, as if an old memory had been reawakened.

The scoreboard is built on the northern mound and it is still guarded by its array of Moreton Bay fig trees. Now 111 years old, it stands proud and motionless, the analogue conscience of a digital age:

It was a caustic reminder of how quickly Father Time moves on: one end of the ground is still open and in the process of refurbishment, and the old scoreboard rubs shoulders with an enormous new video screen, there to fund the endless reviews that beset modern referees and umpires. The letters also spelled out a few home truths in black and white: “Rugby World Cup in 42 days…”

42 days to the Women’s Rugby World Cup in New Zealand. Eight more matches before the drive towards the men’s World Cup begins in earnest. It is not a lot of time for Dave Rennie and his coaches to cement their preferred combinations into place.

That is why he will be grateful for evergreen performance of Reece Hodge at full-back, and the dynamic improvements that continue to be made in Marika Koroibete’s game on the left wing. Both players are moving from strength to strength – the one providing rock-like stability, the other a huge point of difference on attack and defence. Add in one of Andrew Kellaway, Jordie Petaia or Tom Wright and you have a ready-made back three for the World Cup in France next year.

Dave Rennie spent a lot of time in the weekly media build-up pointing out the areas which needed not only repair, but a degree of redemption after the demolition job executed by the Pumas in San Juan.

First, there was the contestable kicking game out of which Argentina made so much profit:

“Yes, we are expecting that [the high ball barrage], and we’ve put a lot of time into it because it wasn’t good enough last time out,” Rennie told reporters.

“So, we know the importance of that, they’ve got a good kicking game and they’ll back their D, we’ve got to make sure that we can win that air battle.

“They’re happy to play without the ball and apply pressure through their defence. We need to kick smart, to potentially get kicks where they’re less organised and get opportunities for us to play off that.”

Then there was the first quarter, a part of the game from which the Wallabies have been emerging in deficit from all of their games in 2022.

“We haven’t started well enough, that’s an issue for us and we’re look at what we’re doing there,” said Rennie.

“Their [South Africa’s] big percentage is going to be around their set-piece battle, set-piece strategy, our ability to defuse it and look for an opportunity off the back of it.”

Above all, Rennie wanted to see reputations voluntarily questioned, and bodies put on the line: “I expect to see resolve. There’s been a fair bit of poking in the chest, a little bit last night and today. I expect to see a response.”

It is fair to say that the Wallaby head coach was able to tick three of the four boxes, and that was enough to build a comfortable platform for victory. The lineout again fired fitfully and provided less than 50% of clean usable ball, though the Wallabies clawed back some of the debits with doughty maul defence on the Springbok throw.

But the other three categories in which Dave Rennie needed to see improvement from San Juan – backfield defence under the high ball, jump-starting the first quarter, and general grit and application – were all unqualified successes on a sunny afternoon in South Australia.

The Wallabies scored from the opening kick-off and were 10-0 up after 20 minutes. Tick. They took 13 of the 15 contestable high balls that came their way in the air, and won the aerial turnover battle by four to two. Tick. They survived a period of power-play pressure when down to 14 men, and pinned in their own 22 towards the end of the first half with exceptional resolve. Tick.

Key to Australian improvements was the presence of Marika Koroibete and Reece Hodge in the back three. Between them, Marika and Reece won a colossal seven turnovers – three for Koroibete and four for Hodge, and they won nine of the 10 contestable kicks that rained down on them – with Reece rating a perfect six from six. They comprehensively shored up that area between the front line and backfield which had been such a rich seam of turnovers and points for Argentina.

His critics can say what they like, but Hodge is one of those players with the priceless ability to improve the performances of everyone around him. He may be a jack-of-all-trades, but he is a master when it comes to the preparation for, and execution within, games of Test match footy.

He was a major influencer right from the opening whistle:

Hodge wins first touch over the inimitable Pieter-Steph Du Toit from a short kick-off up the middle, Rory Arnold pulls the ball in, and one minute later the Wallabies were making exactly the try-scoring start Dave Rennie was seeking:

Hodge won another first touch over the top of Du Toit in the 23rd minute, and then drew an important penalty from a similar situation four minutes before the end of the game:

On this occasion the catch is safely made by Frans Steyn, but Hodge pulls out of the tackle contest at just the right moment to pull a sealing-off penalty out of Franco Mostert.

In San Juan, Australia had taken some serious hits in that ‘Chris Latham’ space between the front line of defence and the backfield. In Adelaide, Marika ensured there would be no repeat from kick-offs:

That joint between the last forward (Rory Arnold in the first clip, Darcy Swain in the third) and the first back (Koroibete) can so easily become a quicksand of doubt, but Marika’s fearless decision-making resolves the situation in Australia’s favour. In the second instance he’s back on his feet to chase Nic White’s precise box-kick, knock down Duane Vermeulen and lead a winning counter-ruck over the top of the big Springbok number 8.

The combination of Hodge’s catch and clean presentation, and the typical short option play the Brumbies love to run on the following phase – with White running around a forward pivot (James Slipper) and a back coming from behind the previous ruck – produces a nice gain off the run by Len Ikitau and an easy exit here. Later in the game, the same move created a try:

Contestable kicks in the ‘joint’ by South Africa got as little pay out of Hodge as they did out of Koroibete:

Hodge catches and sets up a positive ruck, and the Wallabies implement Rennie’s plan to kick back into an empty Springbok backfield.

The other area where Hodge and Koroibete both excelled was in the role as acting full-back, in the last line of defence:

This is Reece, knocking down giant South African second row Lood De Jager decisively and then back on his feet to first isolate, then rob Faf de Klerk on the following phase.

This is Marika, sprinting from one side-line to the other at full tilt with Tom Wright off the field and Hodge outnumbered on the right wing:

Koroibete meets Makazole Mapimpi near the corner flag, and there is only one winner of that collision.

If any doubts remain about Reece Hodge’s ‘glue’ effect on the Australian back-line, they should be dispelled by the following images at a critical break in play during the first half. He is the guy doing the talking, and spelling out what is required:

Australia’s second try of the game was also generated by the combination in their rejuvenated back three:

The Wallabies probably got the idea for this long early pass by White from the end-of-year tour match between England and South Africa last November:

England used the width available off Henry Slade’s left hand to bypass Mapimpi, who jams in early off the left wing and is already on the near post as the pass is made. He does the same against the Wallabies and the outcome is very similar, with Tom Wright and Hodge making progress down the right, and Marika finishing on the other side of the field:

Dave Rennie will be happy that three of the four pipes in the Wallaby system which sprung a leak in San Juan were repaired to a satisfactory standard, or better, at the Adelaide Oval. He got the fast start he wanted and forced the Springboks to chase the game, which is not their strong suit.

He also received a vastly-improved performance from his back three in all aspects of high-ball defence. Marika Koroibete played with top-drawer skill, and controlled violence on both sides of the ball, while the full-back spot is surely now Reece Hodge’s to lose after his equally influential contribution.

Both Reece and Marika typified the Wallabies’ resolve in last-line defence and it only remains to find the best complement to the pair on the right wing ahead of the World Cup – will it be Tom, Jordie or Andrew Kellaway?

The set-piece remains a thorny issue, with Taniela Tupou still looking out of sorts and Australia losing the scrum penalty battle by four to one, and the lineout only retaining half of its own ball. This will be the major battleground for further Wallaby improvement next weekend in Sydney.

For the time being, Dave Rennie and his coaches can sit back and enjoy the moment, and savour a grand sporting occasion played out in front of almost 40,000 people; at a historic ground which has borne witness to so many great Australian sporting triumphs, where the old scoreboard still looks down with the memories of Donald Bradman, Lindsay Hassett and Clarrie Grimmett locked away in its archives – silent, but still alive.

2022 Newcastle Rugby League Grand Final Tournament at Mcdonald Jones Stadium
‘I can’t be doing that!’: Cheika on Bledisloe ‘dreams’ and if a Wallabies coaching return is on his mind
Go to mobile version