ANALYSIS: How Foley really handled recall, what it says about Aus rugby, and teammate he owes big time 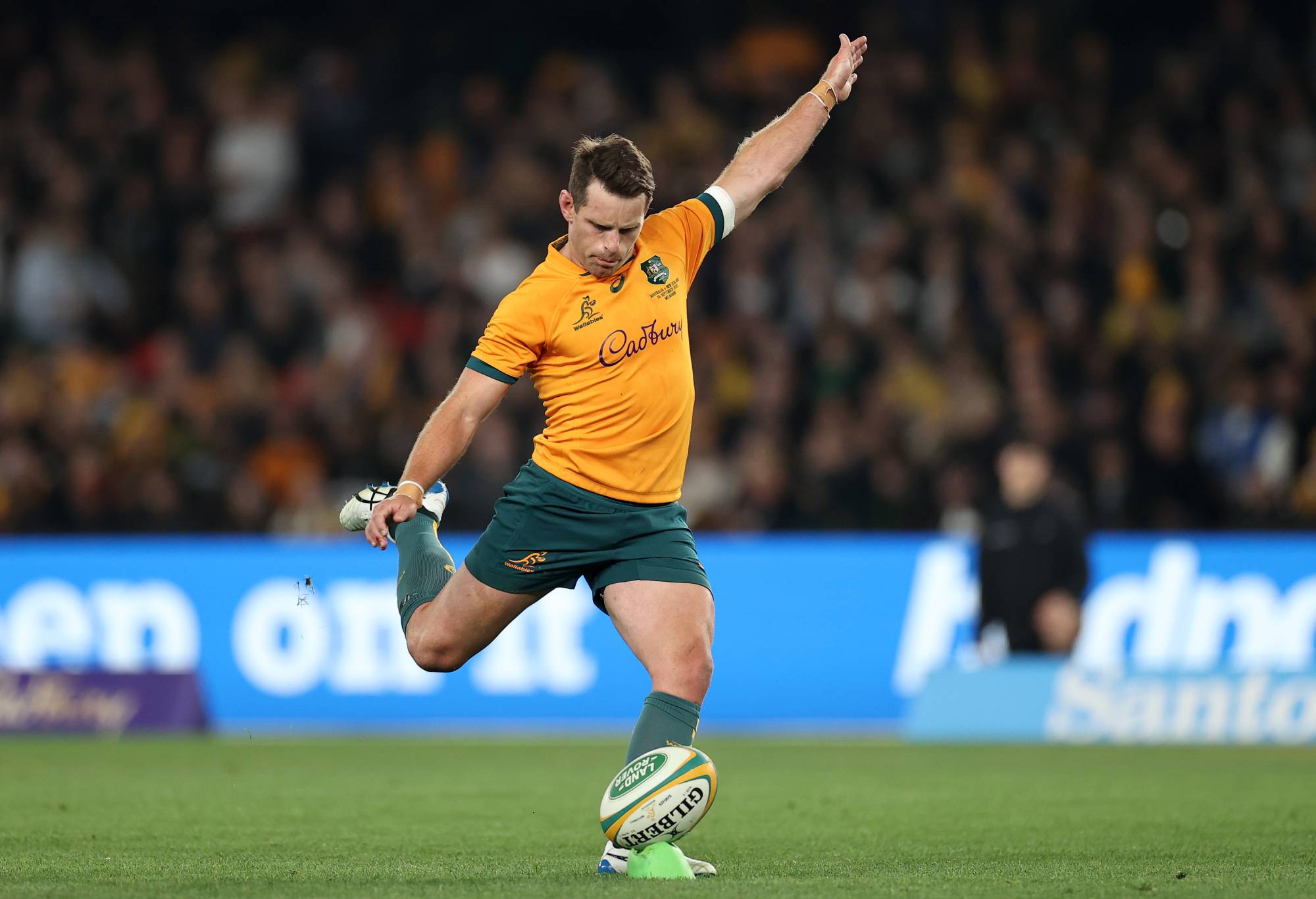 The groove cut by Ireland’s Johnny Sexton on the July tour of New Zealand has cut very, very deep. The evergreen 37 year-old went to the well one more time to oil the wheels of a silky Ireland attack, and seal a first-ever series win in New Zealand for the men from the Emerald Isle.

In the process, Sexton showed that it was quite possible for a man at the end of his career to outperform a Titan of the game still in the centre of his own, New Zealand’s Beauden Barrett. Quade Cooper administered much the same lesson to more youthful challengers during the 2021 version of the tournament.

The narrative of the 2022 Rugby Championship has been a tale of the 10s. New Zealand began to make progress when they finally realised that Richie Mo’unga was the man to run the ship, ahead of their second match against South Africa in Johannesburg.

Likewise, South Africa’s back play looked insipid with Handre Pollard starting at number 10, and the Springboks only improved when their coaches finally found the courage to install Damian Willemse as pivot. The results have been immediate.

The Bokke stumbled into the solution because of the glut of injuries during the match at Ellis Park in which Mo’unga set down his marker, and they have not looked back. Since Willemse was moved into number 10, South Africa have scored nine tries in their last two matches, compared to six in the first three rounds of the competition. It is no coincidence.

Meanwhile, Wallaby head coach Dave Rennie rolled back the years to pick another old pro out of semi-retirement in Japan. Could the magic trick which worked out so well with club-less Quade in 2021, be repeated with Bernard Foley’s recall as an international player one year later? Surely not.

Rennie was mightily relieved, even elated after the match in Melbourne had finished:

“I thought he was sensational. [He] controlled the game really well, his goal-kicking was exceptional. He’s just very confident, he gives a lot of confidence to people around him, good energy and voice, a real positive mindset.

“Down 31-13 it’s easy to start thinking it’s going to be a tough finish to the game but he kept encouraging us to play, and play in the right part of the field. So yeah, I thought he had a big game.”

The standout ‘highlight stats’ certainly support his view. Foley kicked all six of his shots at goal in a reprise of Quade’s seven-from-seven comeback performance on the Gold Coast. ‘Nard’ also made two high-profile try-assists for Andrew Kellaway in the second period. Read no further. That would be enough to ensure his selection for the final match against the All Blacks, wouldn’t it?

In fact, we do have to read further and dig much, much deeper to get to the bottom of Foley’s performance, and the ripples it sends out into the selection future for Rennie’s Australia.

Bernard Foley of the Wallabies (Photo by Morgan Hancock/Getty Images)

According to the raw stats, the ex-Waratahs pivot missed on six of his 12 tackle attempts and gave up two more turnovers via handling errors, one on attack and the other in the action of catching a high kick.

Defensively, Australia knew they had to protect their 33-year-old playmaker. In the bad old days of the ‘musical chairs’ defence under Michael Cheika, assistant coach Nathan Grey used to hide Foley in the five-metre corridor, which meant that the blind-side winger had to defend in midfield. We know how that one worked out.

In the first half at Marvel Stadium, the Wallabies began by having Foley defend in his natural 10 channel, next to scrum-half Jake Gordon:

There is a disconnect between Gordon and Foley around the end of the line. Gordon flies out on to the New Zealand first receiver in both cases – Caleb Clarke in the first instance and Hoskins Sotutu in the second – and leaves a yawning hole underneath him for the Kiwi left wing to exploit.

In the first example, the mix of a spoiled lineout delivery, a tackle by Foley and strong on-ball competition by Rob Leota saves the situation, but in the second Clarke runs straight through the gap untouched and neither James Slipper nor Foley have the speed to close him down. The second sequence was significant, because it led to the ruck where both Darcy Swain and Tom Wright were benched for illegal play.

Was Gordon flying out to cover Foley’s fragility in front-line defence? Only the coaches will know, but it gave New Zealand an easy target. In the second period, the theory changed, and Foley was shifted into the 13 channel, outside his two centres, Lalakai Foketi and Len Ikitau:

In the first example, it is 15 on 15, and the hole left by Foley’s miss on Rieko Ioane is quickly plugged by Ikitau. In the second, Jake Gordon off the field on a yellow card, there is nobody to save him, and Mo’unga’s break leads directly to a try.

The musical chairs may not be so obvious now, but the problem of where Foley can and should defend at lineout time is still nowhere near resolution, after all these years.

On attack, Foley has always possessed an unusual skill-set for a top-class outside-half. He does not vary his positioning as well as a Quade or a Johnny, and he is not effective when forced to drop into the ‘pocket’ well behind the line. On the positive side of the slate, he is exceptional in support and in situations when he can key off a rolling wave of momentum that has already been established.

In Melbourne, nearly all of Australia’s best attacking moments derived from scenarios where someone other than Foley started the sequence at first receiver:

Pete Samu takes the ball over the top of the lineout and he and Wright manufacture the original break, with Foley running a great line in support and the wingman fractionally unable to pick him up.

Inside centre Foketi filled the role of first receiver on no less than six big occasions in the game:

The Wallabies want to connect Foketi, Foley and Andrew Kellaway but they also want Foketi’s soft hands at first receiver, and Foley hitting the line further out:

That try was disallowed on review for no grounding, but a replica going in the opposite direction was nailed down successfully in the final quarter of the match:

In both cases Foley is engaging the Kiwi centre Ioane directly opposite as a second receiver. The Wallabies know that Clarke will probably find a way to take himself out of the play on defence, and open a path to the goal-line. The lock is broken, but it is Foley who prises open the box.

The same attacking ‘chord’ was repeated in larger octaves throughout:

In this snapshot from an attacking sequence in the first period, Lalakai is the major open-side first receiver, Foley is out on his own on the short-side – and Kellaway stays on Foketi’s outside shoulder, not Foley’s. The idea was for the space to be carved out by others in the first instance, with Foley applying the finishing touches on the second play:

Foketi makes the offload in contact to Samu, and Pistol Pete makes a break deep into the opposition half with his veteran number 10 in support on the second play. The Wallabies want Foley as a second receiver in behind Foketi, or working to make decisions on the second play.

The controversy-that-never-was in the second period followed the same pattern:

Passes by Fraser McReight and Nic White (twice), and cleanouts by Foketi and McReight do the essential first wave spadework to create a position where Foley can run at the seam between two Kiwi forwards on second phase, and create the offloading opportunity for Kellaway to accept.

Lightning rarely strikes twice in the same place, not least on a rugby field, but Rennie will be pleased with the second coming of Foley in 2022, following hard on the heels of his triumphant resurrection of Quade Cooper’s international career in 2021.

They are very different types of number 10. Like Sexton, Cooper likes to hold the reins and dictate play by varying the length of his passes and his depth at first receiver. Foley plays better when others have made the initial decisions on his behalf; when he is faced with simple, rather than complex choices at the line on the following pass or play, or in support.

That is something he does very well, and he was given the opportunity to do most of what he enjoys by Scott Wisemantel’s excellent attack plan at Marvel Stadium. There is little doubt that he will retain his spot at Eden Park even if Noah Lolesio is available, and that he may go straight into the World Cup squad with Cooper.

Foley can send Foketi a case of wine and offer up a big vote of thanks if that is what indeed happens. The Waratahs’ man had a whale of a game on both sides of the ball in Melbourne, turning ball over on defence regularly and doing much, much more than merely filling in at first receiver on attack. Foketi was Australia’s real man of the match. Not Foley, not even Samu.

There is not much even Foketi can do to cover for Nard on D however. Foley does not enjoy the chores of defence much, whether they occur in the backfield under the high ball, or tackling in the line at 10 or 13. Whenever and wherever the music stopped in Melbourne, the All Blacks found him, and they are sure to do so again in Auckland.

Moreover, Foley didn’t kick the match-winner in the final minute like Quade on the Gold Coast, instead he gave away a turnover scrum on a controversial ‘delay of game’ call by referee Mathieu Raynal.

It is a statement of where Australia is as an international side. A pair of outside-halves who started their international careers anywhere between nine and 14 years ago still rank as the top two in the country. A few have come and gone, but nobody has surpassed them beyond a shadow of a doubt.

Rennie is still stuck pulling pieces of the past out of the hat to plug the holes in his team, and that is a sad indictment indeed of the domestic game in the country.

The world’s greatest sporting cities are London, New York, Los Angeles (and Melbourne)
‘He has to earn it’: Aus A selection gives struggling Suli a shot at proving World Cup worth to Rennie
Go to mobile version