ANALYSIS: Desperate, dangerous All Blacks roar back as Boks get cute and get caught 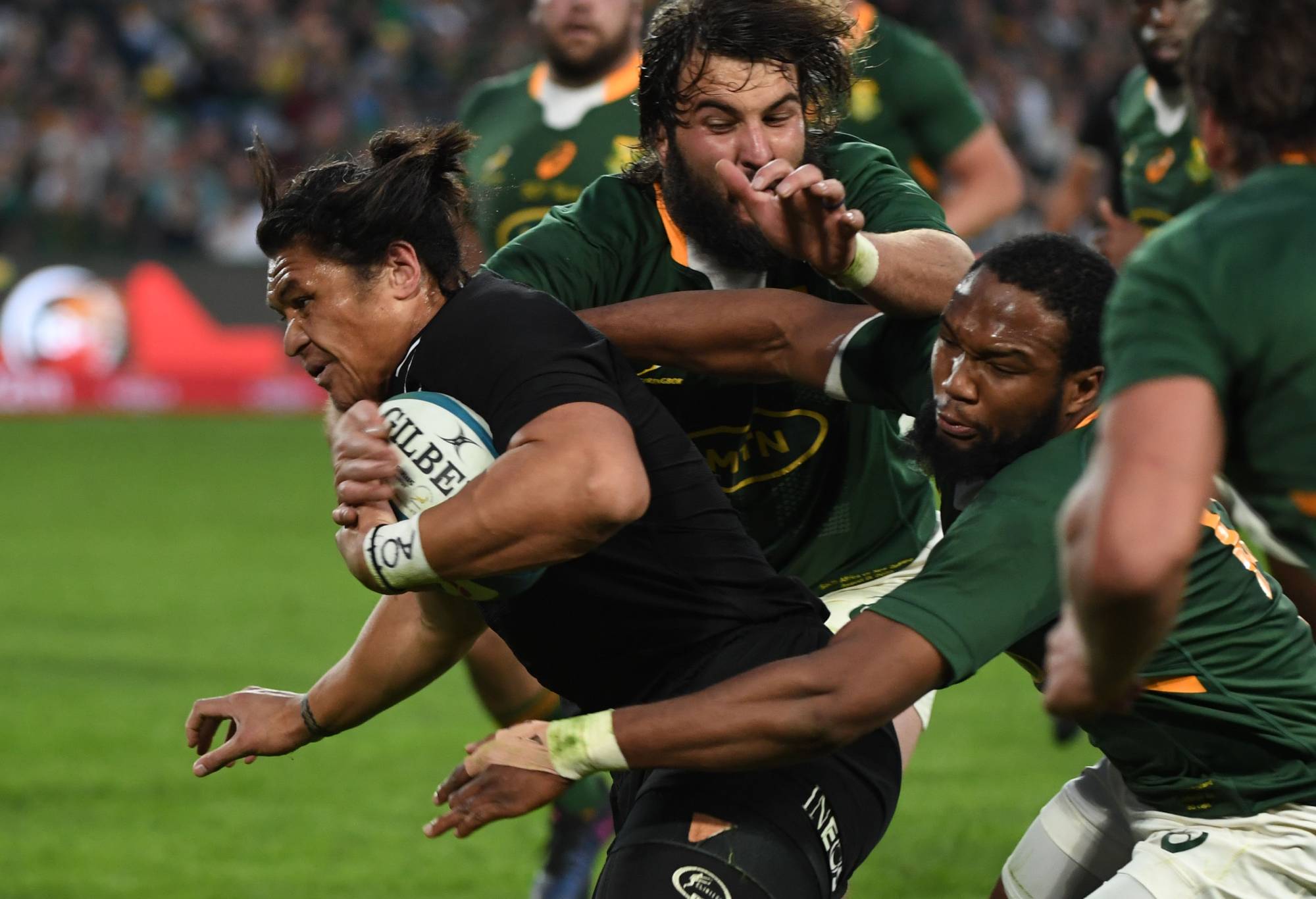 As Diggercane told me: this is the best 0-0 first quarter ever. But there were signs of a Bok problem. Issues which became clear, later. First, after a huge hooker edge in the first Test, the Bok brain trust just gave it up to New Zealand, sitting Man of the Match Malcolm Marx down for the crucial first 30y minutes.

Also, Duane Vermuelen was parachuted into Test rugby after a knee surgery rehabilitation and zero rugby played at any level. Finally, Jesse Kriel was at wing, with four or five proper South African wings left begging.

Ardie Savea and Sam Cane were freed up to play rugby by heavy cleaners, a dominant lineout (fed by a shaky Joseph Dweba, whose monstrous shoulders appeared to cripple his throwing action).

A yellow card to Damian Willemse left the Boks reeling early on, but they regrouped. Pieter-Steph du Toit intercepted a wayward Richie Mo’unga pass and very nearly scored (and would have had he looked left early), but for desperate defence by the All Blacks.

Desperate was the key word. The attitude. A 10-minute burst from the All Blacks reminded us of how dangerous they are, with Will Jordan finally prominent, the aerial game shored up, and the forwards rejuvenated at altitude (where few Boks now live).

Sam Whitelock rolled back the clock, Cane was everywhere, and Mo’unga rebounded from his error to solve the Bok high line. Two tries later and up 15-0, with Dweba demoralized, Kriel knocked out, and Vermuelen’s return underwhelming, New Zealand’s coaching box was full of smiles.

But the last 10 minutes of the half tipped back the Bok way. Marx strode on to join Frans Malherbe on his 50th cap and immediately the Bok scrum and lineout was improved. Jasper Wiese replaced Vermuelen early as well, and we may not see the old No. 8 soon in Bok colours.

Willie le Roux ghosted on to a long flat pass by Handre Pollard and put Lukhanyo Am through Caleb Clarke’s weak tackle attempt, and it was 8-15 after Pollard’s sideline kick. Pollard has yet to miss in the Rugby Championship, and closed the half with a long three.

A 15-10 margin did not seem to fit the All Blacks’ dominance and their coaches’ frowns returned. Their team had run about a hundred more metres, passed and run twice as much, not lost a ruck or lineout, and looked the better side.

In the second half, the Bok renaissance continued with a new front row, and it was soon a 15-13 scoreline on the back of maul drives and direct running, but a typical Wiese overexuberance gave the Kiwis a chance to rebuild their 5-point margin (18-13).


Under the pump: The players (and coach) who must nail Round 2 in The Rugby Championship

Clarke did tackle Am finally to erase a Bok try, but lineout infringements kept the All Blacks pinned in their 22. A formal warning at 54 minutes and the Boks kicked to the corner again. It felt like a big moment when the All Blacks made a crucial steal after several sharp Bok phases. The All Black lineout just kept stealing Bok ball, but their loose kicking kept the Boks in it.

Am took the ball up the guts and found Makazole Mapimpi for an apparent beauty of a try, but it was called back for Jaden Hendrickse shielding Whitelock from a tackle that in truth he would never have made.

But right away, the home side hit back to even the try count 2-2. Pollard struck it sweetly to make it 20-21 and 20 to play. A scrum penalty to SA at 62 allowed an easy exit, and Beauden Barrett seemed to bring panic on the pitch with him: he held Hendrickse back, but it was only a yellow card, not a penalty try.

With 15 minutes to play, the Boks held their first lead (23-21), but there was no rush in their rush defence.

Rieko Ioane’s big break from deep led to a David Havili try from the best player on the pitch (Savea) which put the All Blacks up 28-23.

The All Blacks seemed to play better without Beauden Barrett on, Whitelock continued his role as thief (not just at lineout, but at the breakdown) to put the Boks under pressure, and his Crusader captain Scott Barrett scored the winner.

A deserved winner because of their better start, New Zealand clawed back to 50-50 in territory and possession, and even if the Boks made more breaks (7 to 6) and metres (551-537), the All Blacks beat more defenders (20-17) and completed 12 more offloads, whilst evening up turnovers conceded (10-10).

For the All Blacks, Rieko had 10 carries, Samisoni Taukei’aho 12 and Savea 13. Cane made 11 hard tackles and Whitelock was omnipresent.

For the Boks, Willemse, Am (114 gliding metres on the wing), and Pieter-Steph du Toit were full of running. Pollard never missed at poles and made a lovely pass to set a drifting le Roux free. Malherbe made 12 tackles and Lood de Jager made 13 as well.

The problem for the Boks is it felt like a return to 2013 or 2018 where the Boks tried to play too much and got caught in an NBA style shootout.

Ian Foster is the big winner. What does that mean? He probably won himself a place in the box in France in 2023.

Jacques Nienaber out-thought himself. Keep Marx in the No 2 jersey, a wing on the wing, and a fit No 8 at the base. Maybe it’s a narrow win.

Welcome back, All Blacks!

Sharks set sights on top-two finish after downing Tigers
REACTION: ‘I’ve got no idea’ – Foster questions remain despite ABs proving they’re ‘one heck of a team’
Go to mobile version