For the first time the Rugby League World Cup will be run in parity with the women’s and wheelchair tournaments with all participants being paid the same, while all 61 matches across three tournaments will be broadcast live. 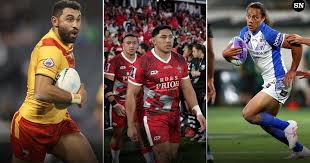 Pre-tournament practice matches will take place the week before the first group stage match of the World Cup.

England vs Fiji Bati will play for the IRL World Cup with a warm-up match at Salford on October 7.
Go to mobile version