2022 RLWC Final Kangaroos vs Samoa on Fox Sports in Manchester

RLWC 2022 Samoa pulled off one of the greatest upsets in rugby league history when they beat England to win through to the World Cup final this weekend – and now the eyes of footy fans across the globe will be glued to their clash with Australia.

This year’s tournament has been shown exclusively 2022 RLWC Final Kangaroos vs Samoa Live on Fox Sports, with all the action also available through Fox’s Kayo streaming service.

History will be made at Old Trafford on Sunday morning (AEDT) when defending champions Australia take on first-time finalists Samoa at the Theatre of Dreams.

The Kangaroos booked a spot in their 10th World Cup final with a hard-fought 16-14 win over New Zealand in the first semi before Samoa stunned hosts England 27-26 in a golden point thriller to advance to the decider. 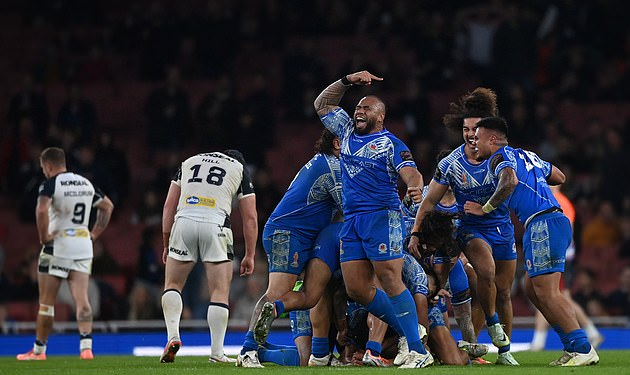 Kangaroos: A clean bill of health for the Kangaroos after their semi-final so coach Mal Meninga has a full squad to choose from. Meninga looks to have settled on Nathan Cleary at halfback and Ben Hunt and Harry Grant as his hookers, so veteran playmaker Daly Cherry-Evans looks to be one of the unlucky players to miss out on the 17. Reagan Campbell-Gillard return from a cork in the semi-final and came through unscathed.

This poster aged well….Crichton with the extra time drop goal to put Samoa in the final of the #RLWC #Samoa #RLWC #Final pic.twitter.com/VkYZX9mFuA

Samoa: Fa’amanu Brown is set to miss the final after suffering a concussion against England when he clashed heads with team-mate Oregon Kaufusi. With Danny Levi having gone home for personal reasons, the search for a new hooker begins. Chanel Harris-Tavita could move into the starting side after coming off the bench in the quarter-final and semi-final. Harris-Tavita has chosen to take a year out of the game in 2023 so a starting role in a World Cup final would be the perfect way to sign off. Prop Junior Paulo is free to play after receiving a caution for a lifting tackle on England’s Tom Burgess.

Samoa is the first tier-two nation – and only the sixth country ever – to play in a Cup decider, and they have been bolstered by the news that skipper Junior Paulo has been cleared to play after being cited for a dangerous tackle on England’s Tom Burgess.